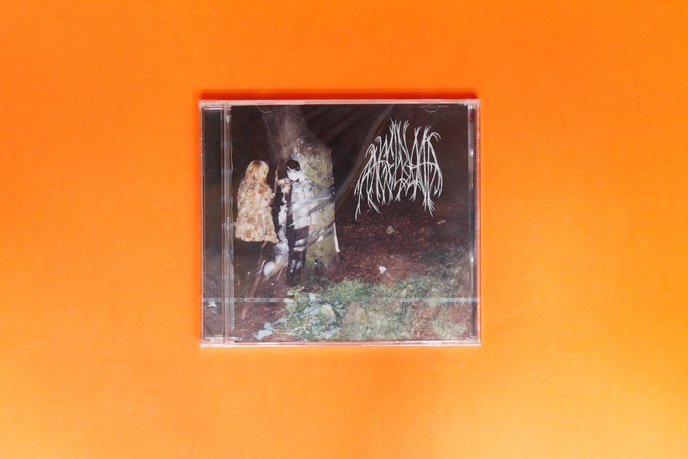 Please log in.
$12.99 ($11.69 for members)
Add to cart
Add to table Facebook Tweet
On Angelblood’s new CD, Labia Minora, musical styles and influences mesh and collide in a simultaneously jarring and hypnotic sonic netherworld of hope and despair. Gnarled chants and incantations alternate with ethereal floating singing, conjuring the images and emotions of pagan ritual, blood sacrifice and the quest for redemption. Crunching rhythm guitars and bass pierced by screaming leads form the dark heavy metal undertow of the album’s sound. This is set to repetitive melodies with something of an earthy folk bent, creating a unique, swaying, dirge-like atmosphere – only to be disrupted by the blistering drums and the chainsaw drill of the speed metal reprise, the growl of the hunter-wolf, the bellow of the slain beast. The epic final cut balances on the edge of dissonance and noise, the croon of the sister-brethren, the blood of the slaughtered pig.

Angelblood was formed in the year 2000, and has played internationally in both music and art venues. Labia Minora is their third CD. In addition to being a band, Angelblood is also a performance art group, whose dark motifs and ritualized actions match the concerns of the band. Finally, Angelblood also creates collaborative art works, distinguished by a combination of distinctive drawing and edgy collage.

In all of its various incarnations, Angelblood is characterized by a raw, almost desperate approach to art and life, realms which, in the Angleblood ethos, are indistinguishable. It is this rebellious attitude of refusal and iconoclasm, coupled incongruously, yet sincerely, with a sense of pathos and reverence, that sets Angleblood apart from the monotonous drone of monolithic culture.
From Printed Matter’s Emerging Artists Publication Series.