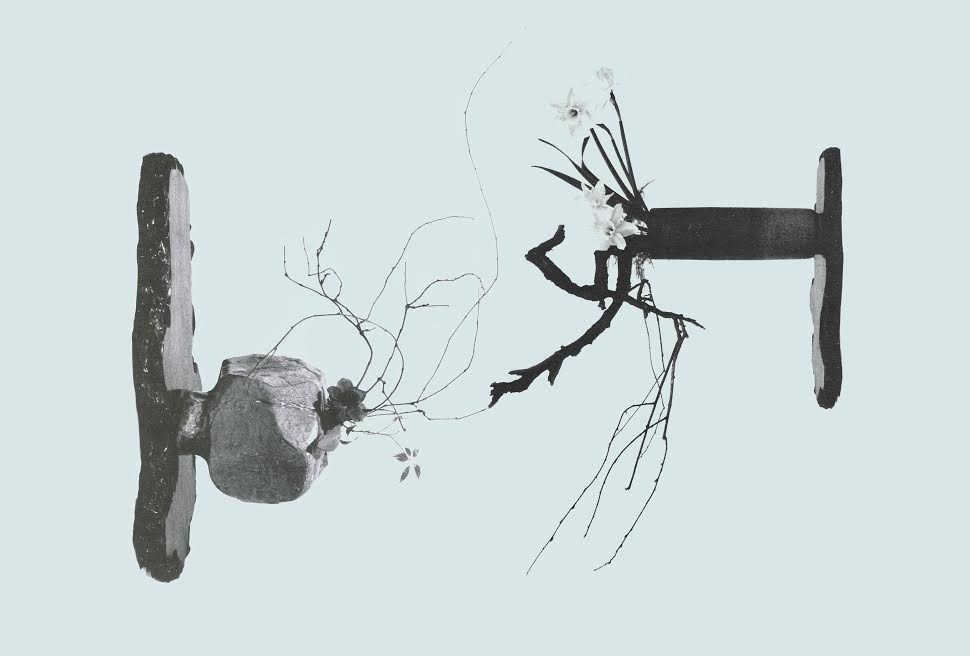 Van Beek cuts, folds, and reassembles vernacular photography from her growing archive of vintage guidebooks and instructional publications to create characters out of domestic fixtures, like houseplants and pets.

In Conversation 1, van Beek takes source material from books about Ikebana, the Japanese art of flower arrangement, extracting two black-and-white photographs of plant sculptures and rotating them so that they confront each other on the page. Untethered to their former still-lifes, these once isolated displays of nature now spar and converse, limbs outstretched and tangled in fervent gesture.

Ruth Van Beek (b. 1977) is an artist who lives and works in Koog aan de Zaan, in the Netherlands. Van Beek’s work orginites from her extensive archive of photographs, which she finds in vintage specialist books and magazines of the 50s, 60s and 70s. These photographs lay the groundwork for a context in which Van Beek intervenes by folding, cutting, or adding painted cardboard directly on top of the image. Van Beek aims to create a sense of discomfort by hiding portions of the original image behind her imposed form. Inanimate objects often take on human-like figures and abstract shapes are given a suggested life through hints of bodily forms through the photographs. There is a sense of the uncanny that weaves throughout Van Beek’s works, aging photographs are rearranged and brought to life, a kind of resurrection occurs in the process of cutting and reassembling. The established visual codes of photography act as a kind of armature on which Van Beek rests her painted elements.The work of Ruth Van Beek has been exhibited internationally in solo and group exhibitions including at Flowers Gallery in London, Gallery 51 in Antwerp, and Fraenkel Gallery in San Francisco. She has published multiple books with RVB Books in Paris. Her artist books have been featured at the New York Art Book Fair and the Unseen Fair in Amsterdam. The Arrangement, published in 2013, was shortlisted for the Aperture Book Award in 2014. Van Beek’s work has been published in several magazines, including Time Magazine, Capricious, The New York Times, and The British Journal of Photography.