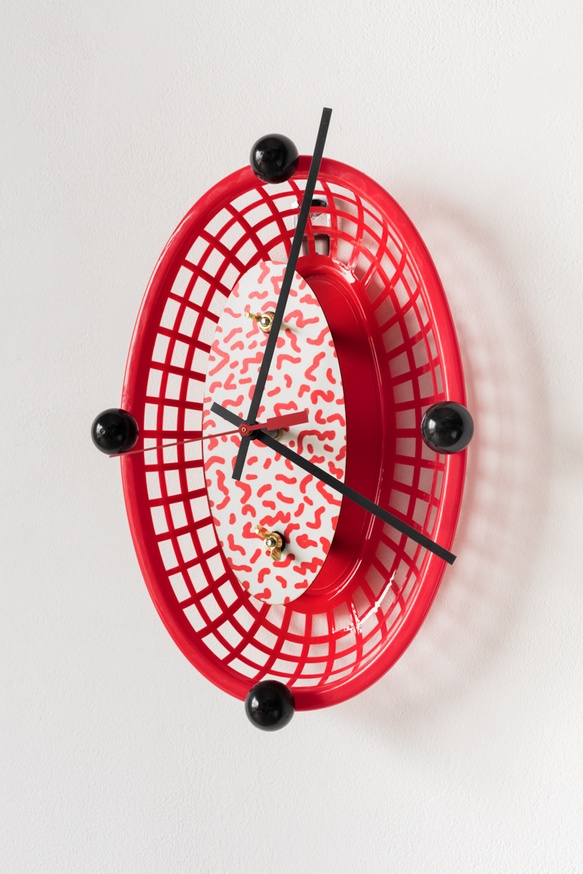 Ricky Swallow and Peter Shire have produced “HOT DOGG CLOCK” in an edition of 20 in two color ways (40 total) on the occasion of the 2017 LA Art Book Fair.

Motivated by both an economy of materials and wanting to make something utilizing existing and often overlooked components, the clock is built around the structure of a classic oval BBQ or fast food basket, with its convenient webbed structure representing the days’ hours. The main central graphic panel is cut from deadstock Memphis laminate in the “bacterio” pattern designed by Ettore Sottsass in 1978. The wooden balls, sprayed in gloss black push the objects design into further relief- with the oversized hands extending beyond their visual plane. The edition is hand assembled in Shire’s LA studio and comes boxed with a signed stamped certificate on checkered “deli wrap” paper. In addition, each clock has a hand etched metal tag which is signed and numbered on the reverse.

Australian sculptor Ricky Swallow (b. 1974) creates work with an eye toward altering familiar, everyday forms, enabling him to celebrate their emotional charge and beauty. Swallow often borrows from domestic design vocabulary, taking as his primary forms objects such as stools, coffee cups, and clocks in his recreation of the ordinary, infusing them with additional considerations of balance, weight, and tension. Ricky Swallow has shown work both nationally and internationally, at the Venice Biennale, ICA Boston, British Museum, London, Museum of Art and Design, New York, the Whitney Museum of Art, New York, Hammer Museum, Los Angeles, Les Arts Décoratifs, Paris, and MoMA/P.S.1, New York.

Peter Shire (b. 1947 in Los Angeles, California) delights in subverting categorization. A founding member of the Milan-based design group Memphis, Shire creates work that incorporates elements such as ceramics, furniture, and toys, all of which adds to the qualities of subversive humor and eclectic playfulness critics often assign to his work. Interested in creating a dialogue between forms and surfaces, technology and aesthetics, Shire consistently toes the boundary between reference and parody of influences such as Bauhaus, Futurism, Art Nouveau, and Art Deco while producing work that extends into the fields of both fine art and industrial design. Peter Shire’s work in held in the permanent collection of MCA Chicago, the Victoria and Albert Museum, London, the Stedelijk Museum, Amsterdam, Brooklyn Museum, New York, MET Museum, New York, and the Museum of Modern Art, Lodz, Poland, among others.