Some People Have Funny Ideas 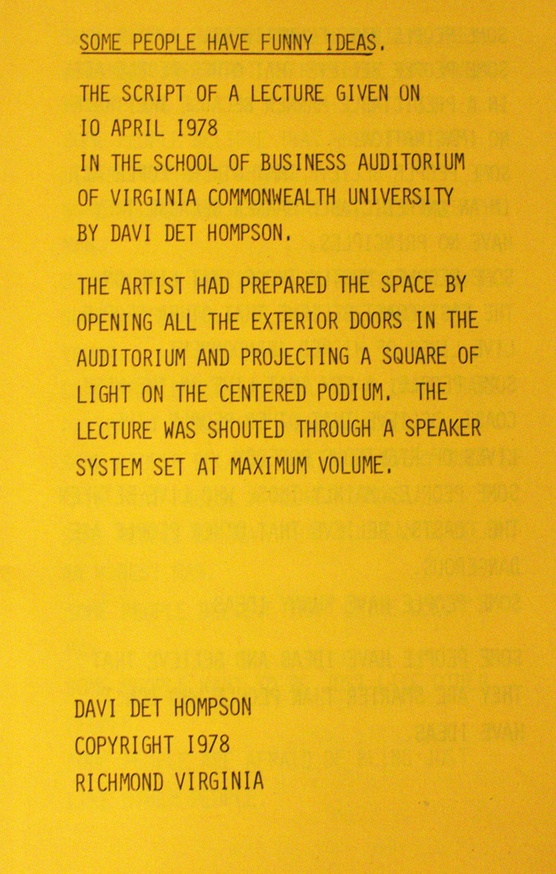 Please log in.
$75.00 ($67.50 for members)
Add to cart
Add to table Facebook Tweet
Some People Have Funny Ideas is the script of a lecture given by Davi Det Hompson on April 10, 1978 in the School of Business Auditorium of Virginia Commonwealth University. The artist had prepared the space by opening all the exterior doors in the auditorium and projecting a square of light on the centered podium. The lecture was shouted through a speaker system set a maximum volume. The book consists of 5 folded sheets.

Davi Det Hompson (1939-1996) is an American artist noted for his connection to the Fluxus movement. In posters, pamphlets, artists’ books, mail art and other constructions Hompson returned frequently to text as a visual form. Offering vivid snippets of language that feel partial or overheard, he presents conversational exchanges in large-sized and blocky format so that the descriptions of the scene stand in for the images themselves. His self-appointed artist name (Born David E. Thompson) was likewise an engagement with the meaning and structures attached to language.

Included here are a selection of self-published booklets, gallery catalogs for mail art exhibitions, scripts to a lecture/performance given by the artist, and other book works. A boxed set of 15 staple-bound pamphlets created between the years 1976-80 include his works “Understand, This is only Temporary” (a booklet of eight observations about the booklet), “The words will have been typed simply because typing words is what I do” (a cyclic dialogue between Hompson and an expected visitor), and “11.” (a sunday drive through the American landscape of oil, sugar, advertising and TV).

Flat Ground, a three part series of film scripts of various formats and bound together with a clip include Part One: (Up that charmed tree), Part Two: (Shaking the limbs), Part Three: (Back on Solid Ground). The first script describes the male and female leads as well as the setting. The second script is merely pages filled with patterns of scribbles. The third script describes a a brief encounter with the leads in a precarious situation.

Plus other silk-screen posters and pamphlets, and a contribution to Second Assembling!