Top Stories, No. 16: Secret Cheat of Freedom, Analects of Self-Contempt 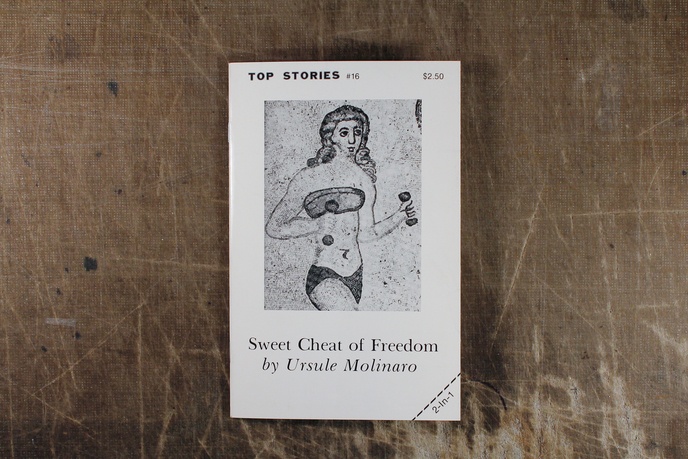 Please log in.
$25.00 ($22.50 for members)
Add to cart
Add to table Facebook Tweet
A periodical of prose by women authors, specializing in experimental writing. This issue features work by Ursule Molinaro: a stream-of-consciousness piece exploring forms of freedom and slavery, and a humorous journal/chart of a smoker trying to quit. This is also a “2-in-1” issue. When you’re done reading one story, flip the book over and find the next one waiting for you.

TOP STORIES (1978-1991) was a prose periodical specializing in writing by women authors. Created and edited by Anne Turyn, the chapbook series features experimental fiction, art, photography, and graphics, and has forecast some of the most progressive writers and artists of the ‘80s and ‘90s. A few particularly notable issues include Cookie Mueller’s How to Get Rid of Pimples, Lynne Tillman and Jane Dickson’s Living with Contradictions, and Kathy Acker’s New York in 1979.