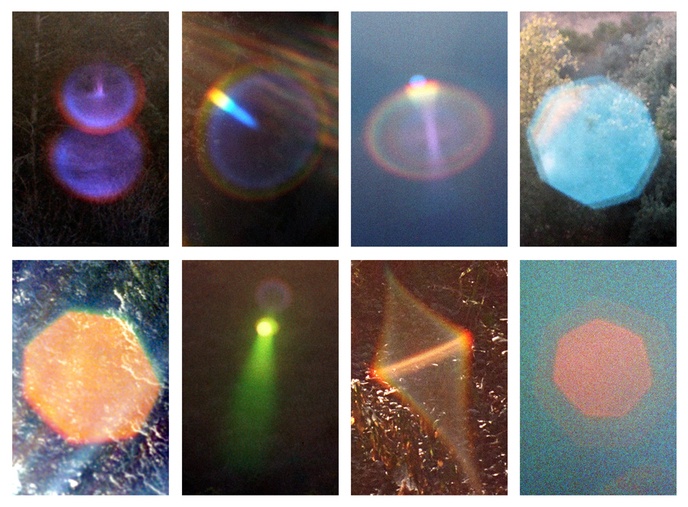 This portfolio of prints, consisting of 8 images, was produced when Sutherland reviewed his photo archive and found that hundreds of his shots were taken facing directly into the sun, causing lens flare. Sutherland cropped down the images and a natural series emerged, each with its own gritty and abstract form, unique shape and color. Prints measure 8 x 12” and are housed in a black debossed portfolio. The signed and numbered edition of 100 is presented with a risograph certificate.

Peter Sutherland (b. 1976 in Ann Arbor, Michigan) works in photography, film, and sculpture to produce works which use techniques of documentary film in order to situate the viewer concretely in an environment of his choosing. Sutherland often combines images and materials, printing photographs on rocks, poles, and large signs. By doing so, the material and the image pull each other back and forth from a physical world and a two-dimensional image-based world. Sutherland’s work has been shown internationally, including solo exhibitions at Mast Books in New York City, Kinman Gallery in London, and Bill Brady KC Gallery in Kansas. Sutherland’s work has been included in group exhibitions at Magenta Plains in New York City, Museum Dhont-Dhaenens in Belgium, and Anonymous Gallery in Mexico City.