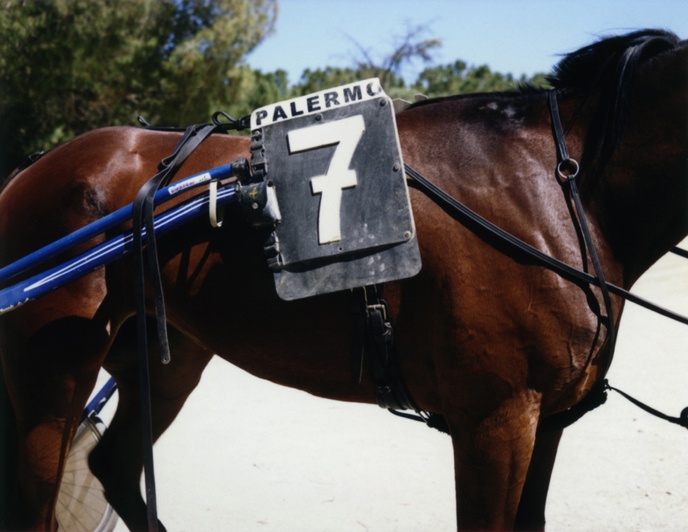 This Fundraising Edition is a photograph of a racehorse in Palermo, Sicily taken as part of Dumas’ Palermo 7 series. The image is a closely shot photograph of the horses side, caged in metal racing equipment with a large sign reading “Palermo 7”. The architecture of leather straps, metal bars, and plastic signage contrast with the warm chocolate colored hair of the racehorse. This contrast highlights the inhumanity of horse racing, in which horses are subject to a violent speculative game for human entertainment.

In 2005, Charlotte Dumas travelled to Norway and Sweden New York and Colorado to create portraits of the majestic canines in her series Reverie. Despite her close proximity to the wolves in her photographs, Dumas reveals the vast distance between the world of humans and wolves as her photographs portray the wolf as an enigmatic, imperceptible being. Untitled (Lake George, CO 2005) is a small print of a wolf, standing on an empty patch of dirt in a snowy field. Clinging to this patch of land, the wolf’s tail curls around, as to keep warm.

Charlotte Dumas (b. 1977 in The Netherlands) is a photographer whose work revolves around the relationship between people and animals. Her sparse, tender portraits of endangered horses and wolves, and dogs found on the street, are both strikingly beautiful and emotionally resonant. Dumas attended the Rietveld Academie of Amsterdam where she began to draw influence from 17th century Dutch painting, specifically the impact of light in classical portraiture. Dumas’s photographs take a careful and intentional approach which allows for a sense of intimacy with her animal subjects while at the same time maintains a respectful distance and lack of intervention. Dumas hopes to inspire viewers to empathize with the eternally caged animal, trapped in a world of environmental devastation and human dominance.