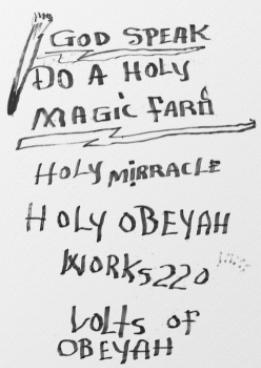 Lee ‘Scratch’ Perry is widely known as a musical icon of his native country Jamaica. An innovative and visionary producer, Perry contributed hugely to the expansion of the Jamaican musical art scene throughout the ‘60s and ‘70s. During that time, many important musicians were produced and recorded at Black Ark, the recording studio Perry built behind his family’s home in Kingston in 1973, where he consolidated his skills in mixing songs using basic recording equipment and developed a unique understanding of acoustic layers and rhythms. The history of reggae, dub, and even hip-hop cannot be told without mentioning Perry´s frenetic and ground-breaking production, as much as it cannot be detached from wider narratives from the African diaspora that go back and forth over the Atlantic Ocean. Around 1979, Perry started covering the whole of Black Ark with indecipherable drawings and scribbles, to some extent anticipating some of his later installations and artworks. The studio was closed (or burned down, allegedly) a few years later, and Perry led a nomadic life before settling in the Swiss countryside.

Over the decades, Perry developed a practice of visual creation that runs parallel to his musical work and that shares with it the combined interest of reaching harmonies and upsetting sensibilities. Drawings, paintings, and texts are assembled on the walls of his studio, or on vinyl covers, later becoming autonomous and independent pieces. Perry thus creates a universe, contrasted and crossed by syncretic influences that range from Catholic figures to Obeah, a system of spiritual and justice-management practices developed among enslaved West Africans in the Caribbean, as well as explicit references to West African religions, such as Akan. These often humorous paintings and sculptures are often juxtaposed with autobiographical compositions, in a network that is continuously rearranged, creating new meanings with each recomposition. The artist’s work intersects different genres by interweaving written words, images, mirrors, photographs, and appropriated objects, among other elements that are often also cut, burned , or painted on. Often imbued with spirituality, Perry’s work gives life to a kind of magic pantheon, in a ceaseless effort to venerate the Almighty. - Nieves

Books related to Dizzy Issue #8, selected by Dizzy Magazine founder and editor, Milah Libin. Dizzy is an art magazine and book publisher focused on bridging the gap between artists of all ages, backgrounds, and levels of exposure. Continuing their country-specific series, Issue #8 focuses on artists living and working in Jamaica. The edition is guest edited by Anna Pollack.