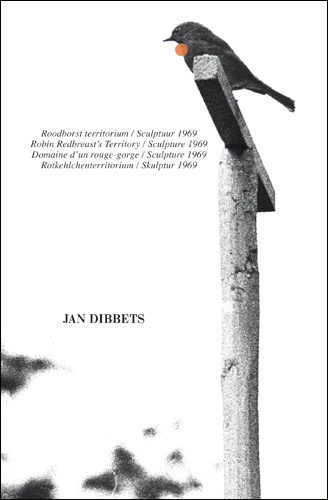 Please log in.
$14.95 ($13.45 for members)
Add to cart
Add to table Facebook Tweet
Robin Redbreast's Territory is a book documenting a 1969 installation in an Amsterdam park by Jan Dibbets, who observed and highlighted the movements of a robin through a series of photographs. The book, published in 1970, is Dibbets’ only Artist’s book.
After learning about the habits of robins, Jan Dibbets decided to extend the territory of one robin, setting new boundaries with poles that the bird would perch on; in this way, the robin participated in the artist's 'Drawing in Space'.
The book’s left-hand pages feature photographs and topographical surveys, alongside handwritten notes by the artist, which are rendered in three other languages (English, French and German) on the right-hand pages.
After giving up painting in 1967, Jan Dibbets began creating ephemeral installations in nature and taking photographs of them. The act is not an end in itself for the artist: his preoccupation is with preserving the meaning of the work, because ultimately what is important is not the reality of the installation but the idea that inspired it.
Early in his development Jan Dibbets used the camera to provide a different, specifically monocular, perspective on the world, literally through his ‘perspective corrections’, but also by other means such as the series of photographic panoramas that led to the Dutch Mountains works.
At the same time he was developing the concept of Robin Redbreast’s Territory / Sculpture which ‘was part of a number of ideas which involved our eco-system, a word which hardly existed at that time’. The book’s text describes how Dibbets obtained an insight into the habits of the common European robin through his reading of a book on the subject, even though he was ‘not interested in biological facts,’ but rather ‘with the frontiers of the visual arts.’
Dibbets’s idea was to harness his new understanding of the habits of the robin to his notion of drawing in space and his desire to visualise ecological systems. However, he ‘realised that there was no way to share it with others’ until ‘the idea of the book came along’ thereby establishing an appropriate means.
He had been working with the gallerist and publisher Seth Siegelaub in 1969: ‘I told Seth about it. He immediately was very enthusiastic and after I delivered him all the material, he took care of everything. I only worked with Seth.’
So it was that this example of the book as artwork came about, whereby understanding of the entirety of the work is only possible by means of the artist’s book." - Zédélé Editions

Reprints of Artists' Publications from the Seventies

A selection of recent reprints of artists’ publications published in the seventies from Zédélé Éditions (Brest, France), Primary Information (New York), and The Everyday Press (London). Including works from Jan Dibbets, Max Neuhaus, Lawrence Weiner, Emmett Williams and others.

Reprints of Artists’ Publications from the Seventies