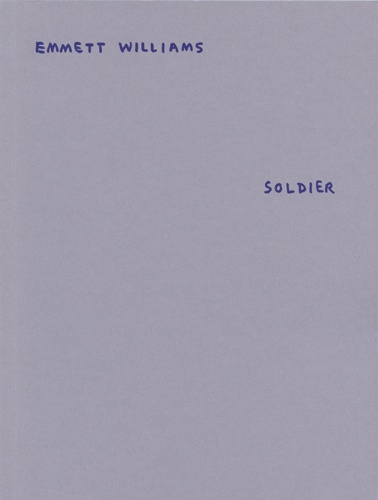 Please log in.
Out of stock
Add to table Facebook Tweet
Between 1966 and 1970, Emmett Williams (1925-2007) was the editor, with Dick Higgins, of Something Else Press, which published a large number of books by artists linked with the Fluxus movement. A pioneer from the Fifties of a new form of poetry called “Concrete Poetry”, in reference to Concrete Art, in 1967 Emmett Williams assembled the first collection of works by international poets and artists, An Anthology of Concrete Poetry, simultaneously published by Hansjörg Mayer in Europe and Dick Higgins in the United States. He defined it in his introduction as “direct” poetry, “using the semantic, visual and phonetic elements of language as raw materials”. In contrast with the subjective expression of traditional poetry, this approach sought to use a minimum of resources, focusing on systematic composition processes based on repetition, permutation and mechanical development, governed by a pre-established protocol.
In 1973, again with Hansjörg Mayer and Something Else Press, Emmett Williams published four long autonomous poems, including SOLDIER, composed the previous year at the California Institute of the Arts, and collected in a single volume entitled A Valentine for Noël. The book was dedicated to his young pregnant wife, Ann Noël, whom he had met in 1968 when she was working for a year as Dick Higgins’ assistant, and who, as director of the graphics workshops at CalArts, helped the artist overcome the technical difficulties of changing over from manuscript to printed poems.
Later, Emmett Williams said: “My first ‘dying’ soldiers poem dates from 1970 during the war in Vietnam.” This first version of SOLDIER is a silkscreen print in red and blue. It is obvious that the later version – a sequence of 40 pages during which the reader sees the three red letters, DIE, gaining one line on each sheet – is visually more striking and politically more effective: by the simplest of means, it makes the inevitable advance of death in the column of soldiers typographically visible. For this re-edition, it also seemed obvious that the publication of the poem in a separate volume restored its implicit function as a flip book. The “playful” aspect present in all Emmett Williams’ works seems to have taken refuge here in the childlike form of these animated books, designed to give the impression of continuous motion. Far from undermining the tragic nature of the subject, the flip book form accentuates the protest against war as a killing machine. A flip book for adults, which remains highly topical. - Zédélé Editions

Reprints of Artists' Publications from the Seventies

A selection of recent reprints of artists’ publications published in the seventies from Zédélé Éditions (Brest, France), Primary Information (New York), and The Everyday Press (London). Including works from Jan Dibbets, Max Neuhaus, Lawrence Weiner, Emmett Williams and others.

Reprints of Artists’ Publications from the Seventies