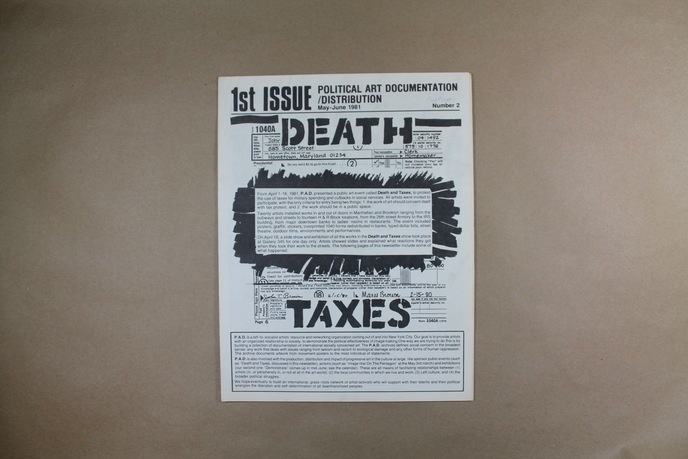 Collected here are newly available back issues of UPFRONT, the newsletter published and distributed by PAD/D (Political Art Documentation/Distribution) from 1981 to 1986.

PAD/D was an activist art and networking collective founded by Lucy Lippard, Gregory Sholette, Herb Perr, Irving Wexler, Elizabeth Kulas and Jerry Kearns in 1980. The collective’s stated mission was “to provide artists with an organized relationship to society, to demonstrate the political effectiveness of image making, and to provide a framework within which progressive artists can discuss and develop alternatives to the mainstream art system.” PAD/D first monthly meetings were held at Printed Matter’s Wooster St. location, before moving to a room in former high school on the Lower East Side, a space managed by Seven Loaves, Inc. Their activities included community organization, events programming, art making, archive building and publishing.

We’re very pleased to be able to offer these seminal documents of art and activism at special discounted prices between $10 and $15 for a limited time.


PAD (Political Art Documentation/Distribution) is an artists’ resource and networking organization coming out of and into New York City. Our main goal is to provide artists with an organized relationship to society; one way we are doing this is by building a collection of documentation of international socially concerned art. PAD/D defines ‘social concern’ in the broadest sense, as any work that deals with issues — ranging from sexism and racism to ecological damage or other forms of human oppression. We document all kinds of work from movement posters to the most personal of individual statements. Art comes from art as well as from life. Knowing this makes us want to learn more about the production, distribution and impact of socially concerned art works in the contest of our culture and society. Historically, politicized or social-change artists have been denied mainstream coverage and our interaction has been limited. We have to know what we are doing. In New York. In the US. In Canada and Latin America. In Europe. In Asia and Africa. The development of an effective oppositional culture depends on communication.

While we want to move beyond the isolation and alienation of the art world, it is important to us to remain artists, to maintain contact with our roots as image makers, to recognize the social importance of making art. We’d like to encourage the fearless use of objects, and encourage and support disenfranchised people in making their own uncolonized art…perhaps the most insidious idea we have to combat is that you have to give up art to be involved in the world, or give up the world in order to be an artist – the alternative being that impotent neutral ground currently offered artist by the dominant culture.

These issues of UPFRONT provide a record of an impactful and historically significant organization. They are a useful and inspiring resource for artists and organizers committed to exploring the relationship between art practice and political participation today.