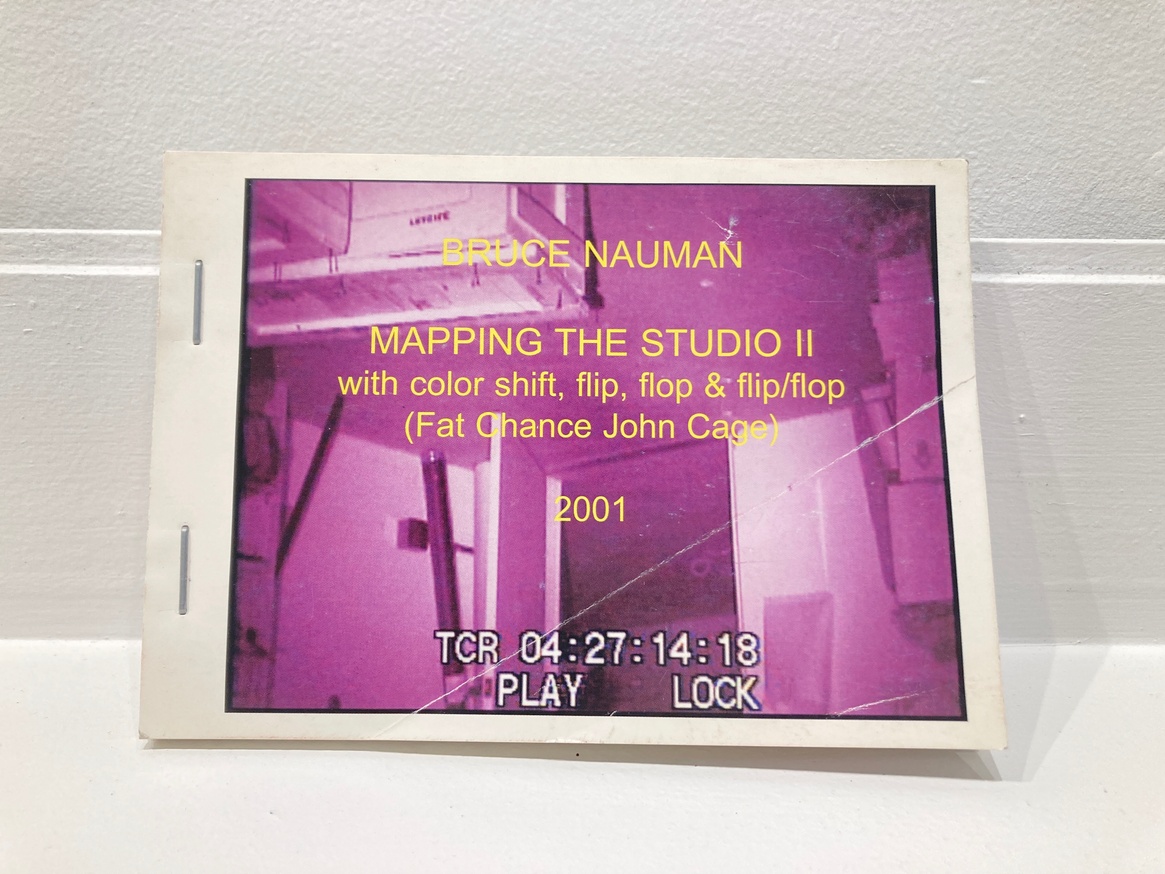 Please log in.
$135.00 ($135.00 for members)
Add to cart
Add to table Facebook Tweet
Comprised of stills from Bruce Nauman’s 2002 multi-channel video installation at Sperone Westwater, this staple bound flip book catalog presents hours of footage Nauman shot of his studio at night. Captured with an infrared video camera, each video still is followed by a corresponding meticulously recorded “event log” noting mundane sights and sounds: “fly on screen”, “cat on ledge”, and “noise plus train whistle”.

Nearly 100 years ago, Ludwig Wittgenstein published a slim book, one of only two that he published in his lifetime. The book was a list of words, produced because of the impoverishment of all other lists of words he could find. Wittgenstein’s dictionary was meant for children—specifically the children he was assigned to teach as he withdrew from the academic atmosphere at Cambridge in 1923. His aim was to teach the children as efficiently as possible, so he chose a few thousand words that ought to be meaningful to the children he was stewarding. The result was a normative list of words that an incredibly important philosopher believed should form the foundation of a well-rounded vocabulary. To celebrate the release of the book, and the occasion of a talk between the book’s publisher and designer Paul Chan with translator Bettina Funcke, here is a list of books that might provide further insight into how Word Book might be understood.

Wittgenstein’s analytic philosophy, especially in his first book, the Tractatus Logico-Philosophicus, has long had an impact on the visual arts. The first sustained engagement was by artists working in the minimal and conceptual domains. People like Robert Morris, Yvonne Rainer, and Joseph Kosuth found a common ground in how Wittgenstein was speaking, at first, about ordinary language and how communication might happen, and the limits where it becomes unintelligible. One of his early mantras (which he came to repudiate), “the limits of my language mean the limits of my world,” is a good starting place to understand why artists concerned with language and ideas were so attracted to his work. Rainer’s everyday gestures in her early performances identified discrete actions that illustrate what constitutes life. Kosuth’s investigations into meaning and iteration (who’s work I truly don’t like, but he’s an obvious mention here) were effective breakdowns of the Platonic model of forms. Morris, too, was interested in the philosophical traditions that carried out directly from Wittgenstein, eventually collaborating with important post-Wittgensteinian Donald Davidson.

It’s easy to keep adding to these primary concerns of language and meaning with artists like Bruce Nauman, who frequently invokes his indebtedness to reading Wittgenstein at an early age. Mel Bochner, and Barbara Bloom, who have both made work explicitly using Wittgenstein’s writings, sustain this directed engagement with the philosopher. Included too is a coloring book by Eduardo Paolozzi, who made paintings about Wittgenstein for the majority of his career, an nice intersection between childhood ephemera and conceptual discourse. Then there’s Duchamp. Why Duchamp? He, like Wittgenstein, was a firebrand who publicly rebuked his profession at the height of his career to pursue an entirely different line of inquiry (chess for Duchamp and early childhood education for Wittgenstein). It was this rejection of his first stint in Cambridge that landed Wittgenstein in a nearly off-the-grid cabin in a fjord in Norway, just prior to his teaching school children in Austria. He detested relying upon other people for anything, even though his monastic lifestyle made it necessary for him to accept financial assistance several times throughout his adult life. In this spirit of self-reliance and figuring out how to do it alone are two books by Chicago’s Temporary Services, focused on independent publishing and maintaining integrity on one’s own terms.

Wittgenstein always had his mind on how to properly educate. Not just children, but anyone. He once remarked that a serious philosophical “work could be written consisting entirely of jokes.” Stanya Kahn’s wicked sense of humor forms a thoughtful investigation of relationships. But Wittgenstein wasn’t exactly known for his sense of humor. The serious impending doom of Shannon Ebner’s slow drip of language is more in line with the aesthetic efficiency that one might expect from analytic philosophy. Or Lawrence Weiner’s drier-than-fire large scale text works. Weiner’s book for Little Steidel is an interesting entry into conceptual text-based books for children. Likewise, Amy Suo Wu’s coloring book/cookbook/work manual for alternative forms of communication is also of note, taking design and typography in a direction intended to disrupt and disorder.

Education itself is crucial to so many artists’ works, like Kameelah Janan Rasheed’s engagement with education both inside and outside of the traditional classroom, as well as Melanie Crean, Shaun Leonardo, and Sable Elyse Smith’s workbook for learning and healing for folks who have been through the carceral system. Tim Devin turns his eye from the present to the past to examine hippie parenting of the 1970s, just about midway between when Wittgenstein wrote his children’s manual and the present moment. Shortly after that in the 80s and 90s, Tony Conrad was putting out cable access television shows in Buffalo, where students could call in and have him solve their homework problems. Conrad, a gifted mathematician who studied at Harvard, was engaged with questions of appropriate pedagogical strategies throughout his storied career.

Wittgenstein’s body of work illustrates his vast imagination, using a range of metaphors and plain language to scrutinize what it means to know something. This is putting it mildly, but through these inquiries Wittgenstein has questioned the bedrock of knowledge, truth, certainty, the use of language, and what we might have in common with other speakers of our languages. The conclusions he forms are that language is something predicated upon rule-following, and that there are better and worse ways to do it, endorsing a pragmatic version of what truth is. This is the normative upshot of his writing: there are ways you ought to use language and there are ways to justify what we do, whether or not we can verbalize those justifications. While it would be mistaken to claim that there is only one reading of Wittgenstein, it would be equally mistaken to overlook these points. Wittgenstein’s Word Book, once a curio in his bibliography, is now available to English-speakers to illustrate the finer points of his approach to philosophy and understanding.

Nickolas Calabrese is an artist and writer based in Tulsa, OK.