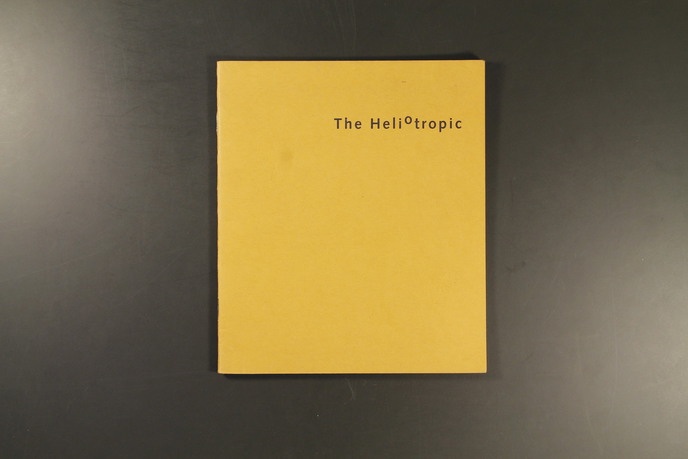 Please log in.
Out of stock
Add to table Facebook Tweet
Through philiosophical quotations, appropriated symbolic imagery, and other writings, this publication is a deconstruction of the term “heliotropic.”

THEY (BOOKS) ARE PERHAPS THE LEAST IMPOSITIONAL MEANS OF TRANSFERRING INFORMATION FROM ONE TO ANOTHER (SOURCE).
- Lawrence Weiner, from Art-Rite, #14, Winter 1976/77

One of the most notable features of American modernity is the development and implementation of a mass media machine, functioning in the service of the government. Much of the information which it imparts is based on statistics and scientific studies created by and for the aggressor state, whose sole directive is capital and whose “benefits” can be seen in dollars pre-appointed for its sponsors. Because there is an incompatibility between national scientific efforts and the public’’s needs and desires, the importance of forms of parallel culture to report on the latter is great.

R. Buckminster Fuller coursed many of his studies and projects through one initial point; he began his own “general systems analysis” to decide on the parameters of an observed universe and then strove to explain all the physical and spatial properties of his universe. With that knowledge, Fuller could determine how to effect beneficial change within the system. There are several artists’ books at Printed Matter which embark on similar scientific projects. Artists use text and image to conceptualize their given universe, and they document findings to support their own brand of logic based on physical and meta-physical surroundings. The radical nature of this activity (taking science into one’s own hands) is reflected in the artists’’ book (publishing one’’s own canon). The existence of these performative art-products suggests to the reader that s/he base his or her behavior on personal observations and desires for change.

In her book The Heliotropic, Jennifer McMackon documents research on heliotropism in plants and proposes developing a means to incorporate the heliotropic process into human bodies, perhaps with implants affecting the lymphatic system. By making glands/bodies receptive and communicative in this non-traditional way, humans could function outside of linguistics. McMackon writes, “the heliotropic ’’bend’’ hints at the presence of a sometimes dormant reflex.” The ’’bend’’ of the human body would be an involuntary response mechanism with practical applications like “a home pregnancy test, a lie detector, a recipe for perfume, post-Fluxus poetry” etc.

George Gessert’s publications are also based on an in-depth study of botany. In Scatter and Seed Library, Gessert documents his experiments hybridizing and dispersing the Pacific Coast iris. Scatter lists 377 locations where he planted iris seeds or gave someone else a packet of seeds to plant in another more far-fling region. His project makes use of the world as a lab, and, according to his logic, it is beneficial to the world in its conservation of an increasingly rare species of flower. Seed Library also focuses on seed propagation but in a more general, less controlled way. Subtitled “an offset flower album, with DNA,” Seed Library is a set of five seed packets which was produced in an edition of 460. Presumably, the 460 recipients of this publication will collaborate with Gessert and plant their irises, marigolds, hollyhocks, milkweed, and morning glory seeds.

On first consideration, Gessert’’s project seems like a benign and pretty project, but his re-conceptualization of people’s role in the ecosystem could have extraordinary effects if it were realized on a larger scale. In the introductory statement of Scatter, Gessert terms himself a “human pollinator.” If a greater segment of the population took on this role and concerned themselves with plant propagation, the effect on our natural surroundings could be astounding. For example, if school children were to collect the acorns from their sidewalks and throw them onto grassy road shoulders as they are driven to school or to the mall, the sparse and often bleak landscapes of our towns and cities would be dramatically transformed, at no cost to the taxpayer.

Valerie Solanas, the gunwoman who nailed Andy Warhol, authored the SCUM Manifesto, which ventures into the nature of human reproductive cycles with a big fuck-you to scientific doctrine and dogma on this subject. In her tract from 1967 (1989 reprint), Solanas gives the following analysis: “The male is a biological accident; the y (male) gene is an incomplete x (female) gene, that is, has an incomplete set of chromosomes. In other words, the male is an incomplete female, a walking abortion, aborted at the gene stage. To be male is to be deficient, emotionally limited; maleness is a deficiency disease.” The author calls on all women to take control of the reproductive future of the human race and make sure that they are the ones who come out on top in our next societal mutation/ formation.

For the most part, the SCUM Manifesto is a perverse, if highly original, document; however, Solanas makes a critique of the scientific institution’s relationship to the state which has proven to be scarily accurate. She asserts that diseases are curable and that deaths due to disease could be negligible “if an all-out, massive scientific assault were made on the problem.” According to Solanas, this is impossible, for several reasons including: scientific stratagems and monies are reserved for the production of military technology and wares; discouragement of people to pursue scientific careers due to the expensiveness and exclusivity of higher education; the bias of the money system for the least creative scientists; the economy’’s need for new pharmaceutical products and the profit-potential inherent in medical care.

Fred Tomaselli has accepted his position as subject in a total consumer society and has created new classifications for our earthly cosmology according to this position. Inventory contains several art projects which are an effort to make a more direct connection between science and our socio-economic circumstances. He’s named all the planets in the solar system after music groups, with stellar junctions labeled GWAR, Iggy & the Stooges, Hot Tuna, Captain Beefheart, etc. Tomaselli also applies his neo-science to physiognomy by making portraits of his sitters according to the drugs they have consumed. Relevant markers, like caffeine, nicotine, opium, psilocybin, and chocolate, are chronologically mapped out on the page to represent the subject’’s form.

In the books noted above, the attributes of nature are re-defined and people’s role in the natural world is re-assigned. In Toni Dove’s artists’ book, Fugitive Concepts, the definition of the “natural” is reconsidered. Dove asserts that everything in our physical universe, including human products and byproducts (plastic, airplanes, skyscrapers, radiowaves), is part of nature — as organic and miniscule as the structure of an ant-hill. This conception of the universe finally and resolutely dismisses the presumptuous notion that man can, will, and has mastered the cosmos. To acknowledge this as fact and incorporate it into a cultural ideology one has to laugh at the idea of conquering an ocean or continent, at the gains of imperialism, at the idea that it is a better plan to put factories which produce toxic waste fifty miles south of the border.

Two other earlier bookworks that document scientific investigation are Charles Ross’ Sunlight Convergence/ Solar Burn from 1972 and Bonnie Gordon’s Anatomy of Proteus(1983). On September 23, 1971 Charles Ross began making a drawing of that equinoctal year by placing a fresnel lens (similar to a magnifying glass) in a frame on the roof of his building. Every day he placed a treated panel beneath it, and the sun would burn a line into the wood according to the arc that it traveled on that day. At the end of the year, Ross laid out the 365 panels to find the form equated with the sun’s activity. They made this shape:

Ross used his findings to show that the earth’s axis has a certain amount of “wobble” and over huge amounts of time, its orientation shifts by very small degrees.

In The Anatomy of Proteus, Gordon fuses myth, linguistics and early computer imaging to transform the image of a business man into an amoeba, an eagle, a dust ball, and a pond. Her work appears as a prototype for the present phenomenon of morphing, and is a good example of an artist manipulating technology in a proactive way.

All these artists, in their books, present new solutions to what they perceive as problems in our social structure. Whether they are practical or pragmatic is not the issue; they represent a desire for science and art to come to something other than material ends. And in the most idealistic sense, they subvert power plays and oppression created in the name of science, as well as those constructed through the art market.