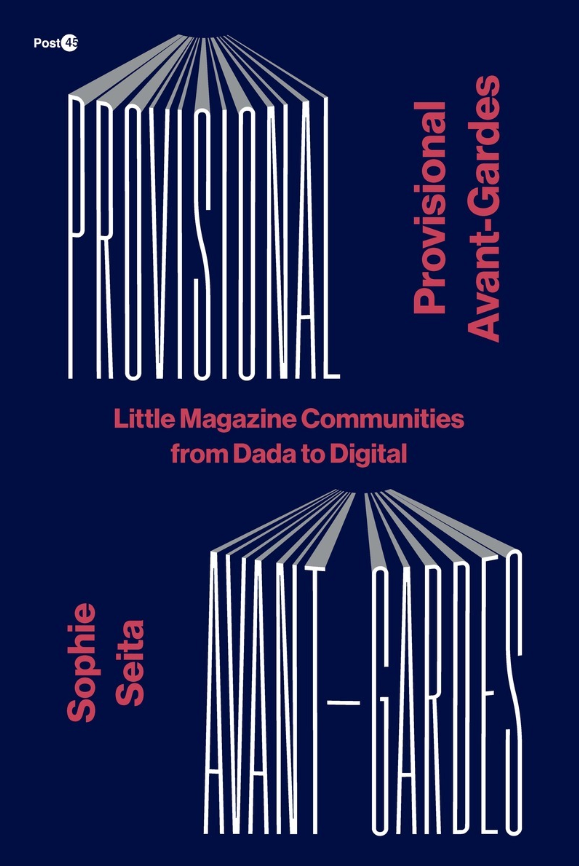 What would it mean to be avant-garde today? Arguing against the notion that the avant-garde is dead or confined to historically “failed” movements, this book offers a more dynamic and inclusive theory of avant-gardes that accounts for how they work in our present. Innovative in approach, Provisional Avant-Gardes focuses on the medium of the little magazine—from early Dada experiments to feminist, queer, and digital publishing networks—to understand avant-gardes as provisional and heterogeneous communities. Paying particular attention to neglected women writers, artists, and editors alongside more canonical figures, it shows how the study of little magazines can change our views of literary and art history while shedding new light on individual careers. By focusing on the avant-garde’s publishing history and group dynamics, Sophie Seita also demonstrates a new methodology for writing about avant-garde practice across time, one that is applicable to other artistic and non-artistic communities and that speaks to contemporary practitioners as much as scholars. In the process, she addresses fundamental questions about community, collaboration, and the intersections of aesthetic form and politics.

Sophie Seita’s practice spans text- and archive-based work, translation, performance, lecture-performance, video, and queer-feminist collaboration. Most recently, she’s the author of My Little Enlightenment: A Lecture Performance (Other Forms, 2019); the editor of The Blind Man (Ugly Duckling Presse, 2017), named one of the Best Art Books of 2017 by The New York Times; and the translator of Subsisters (Belladonna*, 2017) by Uljana Wolf, whose selected essays she’s in the process of translating. She’s also published on and continues to think about queer love poems, feminist hospitality, digital publishing, translation, multilingualism, experimental writing, forms of reading, and practice-as-research. She regularly performs and presents her work nationally and internationally and earlier this year had a solo exhibition at [ SPACE ] in London. Following three years of teaching at the University of Cambridge, she’s currently an Assistant Professor at Boston University, working on a book of lyric essays, tentatively called Lessons of Decal; and on a new performative installation The Gracious Ones, a philosophical ballet in pieces.

Thom Donovan is the author of numerous books, including Withdrawn (Compline, 2017), The Hole (Displaced Press, 2012) and Withdrawn: a Discourse (Shifter, 2016). He co-edits and publishes ON Contemporary Practice. He is also the editor of Occupy Poetics (Essay Press, 2015); To Look At The Sea Is To Become What One Is: an Etel Adnan Reader (with Brandon Shimoda; Nightboat Books, 2014), Supple Science: a Robert Kocik Primer (with Michael Cross; ON Contemporary Practice, 2013), and Wild Horses Of Fire. His current projects include a book of poems and other writings based upon the compositions of Julius Eastman, a book of critical essays regarding poetics, political practice, and the occult, and an ongoing “ante-memoir” entitled Left Melancholy.