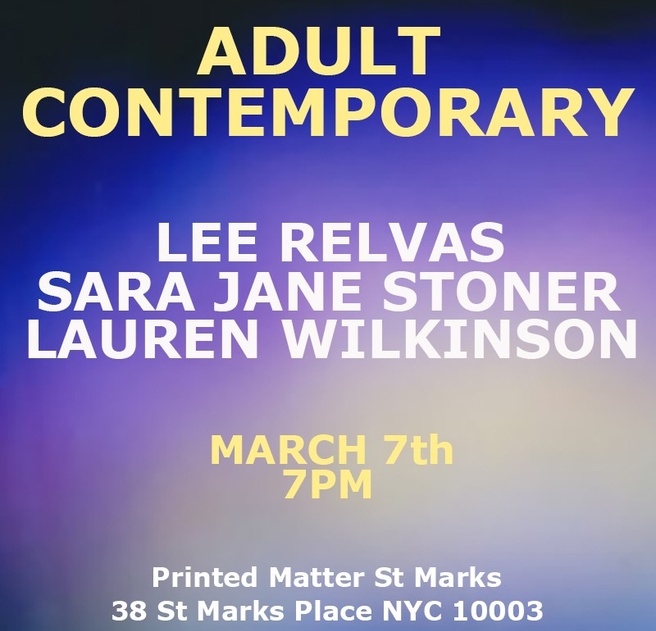 ADULT CONTEMPORARY is a mobile reading and performance series founded in 2013 by Katherine Brewer Ball and Svetlana Kitto. We ask artists, academics, performers, and writers to “read” in whatever way they see fit; to play off each other; to self-determine; to use the platform to experiment in form; to give us words, movements, sounds or textures. Adult Contemporary is a salon-style site of experimentation, genre collapse and extra-ordinary conversation. Our events are always free and open to the public. On March 7 Adult Contemporary present’s the work of artist Lee Relvas, poet Sara Jane Stoner and novelist Lauren Wilkenson.

Lee Relvas is an artist, writer, and performer living in New York. She is the recipient of the Sharpe-Walentas Studio Program award 2018-2019, and received the Rema Hort Mann Foundation Emerging Artist Grant in 2016. She has had recent solo exhibitions at Callicoon Fine Arts in New York and Artist Curated Projects in Los Angeles, and has also exhibited and performed at The Museum of Modern Art, The Whitney Museum, The Hammer Museum, The Brooklyn Museum, ONE National Gay and Lesbian Archives, Various Small Fires, Los Angeles Contemporary Exhibitions, and Art in General. She has contributed to ArtForum, Joyland Magazine, Paris/LA, The Hammer Museum exhibition catalogue Uh-Oh: Frances Stark, 1991-2015, and the book of collected essays Forms of Education (Inca Press, 2016).

Sara Jane Stoner is the author of Experience in the Medium of Destruction (Portable Press @ Yo-Yo Labs, 2015), nominated for a Lambda Award in poetry, and the chapbook Grief Hour (Black Warrior Review, Spring/Summer 2017); other writing can be found in VIDA (“Failing at Subjects”), the Recluse, La Vague, and Fence, but more often at live readings. She holds an MFA from Indiana University, and is a PhD candidate in English at CUNY Graduate Center. She has taught workshops at the Poetry Project, Poet’s House, and Wendy’s Subway, as well as classes at Cooper Union, Pratt Institute, the CUNYs, Bard Microcollege Holyoke, and the New England Literature Program through the University of Michigan.

Lauren Wilkinson earned an MFA in fiction and literary translation from Columbia University, and has taught writing at Columbia and the Fashion Institute of Technology. She was a 2013 Center for Fiction Emerging Writer’s Fellow, and has received support from both the MacDowell Colony and the Djerassi Resident Artists Program. Her fiction and essays have appeared in or are forthcoming from Granta, The Believer, and The Millions, among other publications. American Spy, her first novel, is a Spring 2019 Barnes & Noble “Discover Great New Writers” pick. Lauren grew up in New York and lives on the Lower East Side.

Free and open to the public at 38 St Marks Pl.