The Schizophrenic Bomb: Richard Tyler and the Uranian Press

Printed Matter is pleased to announce The Schizophrenic Bomb: Richard Tyler and the Uranian Press, the first extensive survey of published work from artist and printmaker Richard Oviet Tyler (1926-1983). In collaboration with Uranian Phalanstery director Medi Matin, and with the support of Steven Kasher Gallery, the exhibition presents dozens of publications and related artifacts from the under-known downtown artist and Uranian Phalanstery co-founder R.O. Tyler. The exhibition will open with a preview reception on Friday, March 10, 6-8 PM, and will be on view at Printed Matter through April 16. (Join on facebook here)

Born in Lansing, Michigan, Tyler was conscripted into military service during World War II while still a teenager. By September, 1945, he was in Tokyo to witness the devastating aftermath of US firebombing, and registered the psychic trauma wreaked by history’s first atomic detonation over a civilian population in Hiroshima and Nagasaki. Following the war, Tyler worked as an illustrator for the army newspaper and took odd jobs, returning to the States at the end of his service contract and enrolling at the Chicago Institute of Fine Art on the GI Bill. Here in 1956 he met his wife, the painter, sculptor and filmmaker Dorothea Baer.

Tyler and Baer moved to New York and Tyler worked as a graphic artist (for Playboy magazine, among others) and as an instructor at SVA and CUNY. From an early stage he was also situated in a burgeoning downtown art scene anchored out of Judson Memorial Church, and in October 1959 helped establish the Judson Gallery along with artists Claes Oldenburg, Marcus Ratliff, Jim Dine and Phyllis Yampolsky. Oldenburg’s famous Ray Gun Show was held in that space several months later, and he executed his first performance Snapshots from the City there shortly after. It was a moment when Oldenberg and Dine were poised to break onto the scene and Tyler, though not himself a ‘happenings’ artists, turned to an art practice spanning experimental performance, music-making, and publishing/printing that was committed to an existential life-as-art doctrine. This included the 1962 staging of Peter Schumann’s Totentanz at Judson (Schumann’s first US performance, several years before the founding of Bread & Puppet Theater) which was performed by Tyler in the role of ‘Death’ and the Uranian Alchemy Players, a musical group made up of Phalanstery members.

Tyler’s Uranian Press was styled as an outlaw/fugitive imprint of the Phalanstery, producing a steady stream of editioned publications featuring his own writings and artwork, often in the form of socio-spiritual tracts and manifestos. Tyler sold his many chapbooks, broadsides and fine art editions from a ‘free-press’ pushcart (or ‘bookbarrow’) that he wheeled from his basement workshop in the East Village to a spot inside the Judson gate on a daily basis. The overstuffed pushcart, on view as part of the exhibition at Printed Matter, offered Tyler a way to broadcast the message of the Uranian Phalanstery to a wider public.

The Schizophrenic Bomb is conceived in two parts, with Printed Matter’s back wall focused on editioned book works and reproducible print forms, alongside annual membership mailings, calendars, letters, correspondence artwork, and several examples of Tyler’s massively sized one-of-a-kind bookworks. Tyler was a master woodblock artist and also worked extensively with deep-relief etchings – alongside this more traditional media he also created a strange body of xeroxed artists’ projects with phrenetic collage elements. The artist’s creative process is partially evident in these works as we see Tyler recycle visual motifs across the decades, reusing elements of his work in his various media.

The publications and print portfolios of the Uranian Press are both an account of an inward journey toward self-realization and distinctly outward looking, with much of the work attuned to and staked against the “terror of the times”. With a visual energy reminiscent of Romantic printmaker and poet William Blake and the political engagement of 19th Century printmaker José Guadalupe Posada, Tyler’s gnostic tracts are updated for an era dogged by fears of nuclear apocalypse, as well as exhaustion brought on by wars abroad and violence at home. Restlessness, anxiety and abiding nihilism (“Dissociation, Despair, Destruction”, as Tyler writes) is the cause of society-wide spiritual schizophrenia, and the Phalanstery aimed to find ‘self transcendence through the sacrificing self’ as a way out of darkness into the “great dawn of Mutual Love”.

The Uranian Phalanstery and First New York Gnostic Lyceum Temple was established on the vernal equinox of 1959 by Tyler (alias Rev. Relytor, Dr. Uranian) and Dorothea Baer (alias Mm. Reab). The group moved into their ‘lodge’ at 328 East 4th Street, between Avenue C & D, one of two side-by-side brownstones which housed the Lyceum and Rectory. At the same time Tyler was also the building ‘super’ to Oldenburg a few houses over - and in an 1983 interview with Tattoo Time Magazine Tyler relays how he would often find Oldenburg at his sewing machine late nights stitching ‘soft hamburgers’, and other works.

The Phalanstery acted as a nexus for a range of gatherings and activities, a collective home and meeting place for a rotating cast of artist-disciples (or ‘agents’ as they were called) to meditate collectively and create art. With Tyler as its de facto ambassador and minister, the group pushed for a communally-minded investigation into creative enlightenment and self-transcendence, melding a patchwork spiritualism with an avant garde practice of a “self-documented life” through which gnosticism and everyday experience were folded into an encompassing artwork.

The Printed Matter Project Room will be transformed into an immersive environment with large-format photomurals that recreate Tyler’s basement-level workshop and printing studio. Before the Phalanstery relocated to Hamilton Heights in 2010, photographers Martin Hyers and William Mebane extensively documented the East 4th Street studio, and these images show a workspace that is entirely covered by Tyler’s prints and woodcuts, as well as newspaper clippings, comics and photographs. The rest of the house was likewise overrun with original work and found material – toys, masks, dimestore novelty items, cigars and Americana, a dizzying mixture of pop detritus which Tyler meticulously organized into a sprawling pagan shrine and museum display.

The motley group who served as agents of the Uranian Phalanstery adhered to an ‘Eight-Fold Way on the Path’ borrowed from Buddhistic principles (Right Mindfulness, Right Thought) infused with an elaborate symbological system determined by cosmology and planetary movement. The group regularly took LSD and other psychedelics as a mode of ‘controlled’ schizophrenia, helping to facilitate entry into non-material realms. Music and dance – “operations of white magic” as they’re called in the group’s Founding Articles – were a central element of the Phalanstery, and improvisational group performance acted as an important spiritual access point. The nine high holy days (coinciding with solstices, equinoxes and other cosmological occurrences) were marked by late-night, candlelit gatherings. Tyler was an initiate of Tibetan tattooing, a practice believed to have healing properties, while the Uranian Phalanstery’s Burial Society performed funerary rituals, including “low cost” cremations after the death of a group Member.

For all the Phalanstery’s activity, it is in the publications and bookworks of the Uranian Press where the many divergent threads and influences – a fascinating mix of pop culture and the avant garde smashed up with the ontological – come together and offer the most direct view into Tyler’s manic creation of life lived as an artwork. Cancer, an original collage work comprised of tipped-in photos, letters, logotypes, as well as (fittingly) the cosmological charts of the ‘Cancer’ zodiac, feels like an especially important coalescence of the bodily and spiritual. Here Tyler confronts and contemplates his own progressing cancer of the face with an unblinking book project which he compulsively updated until his death from the illness in 1983. 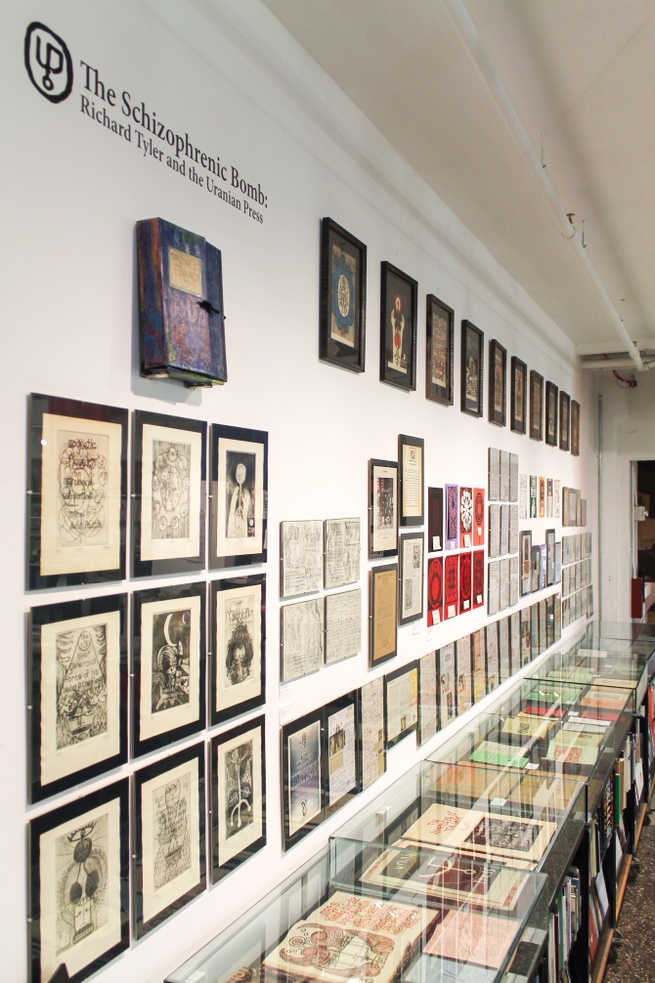 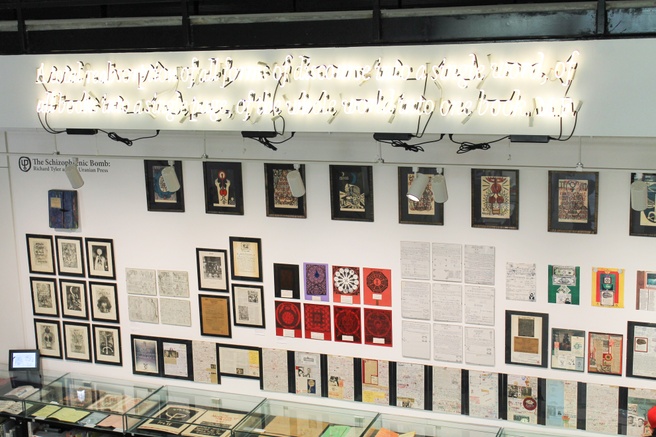 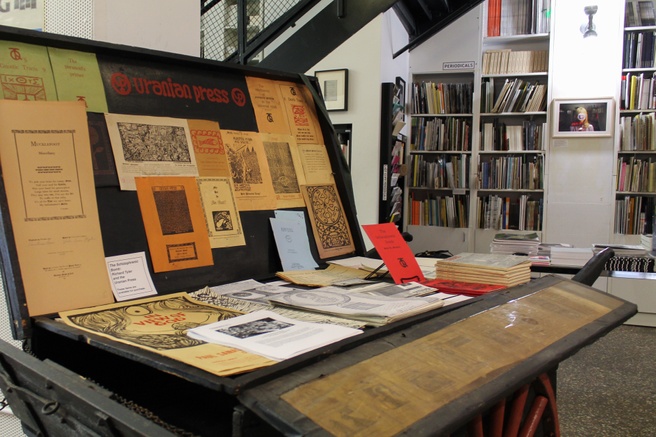 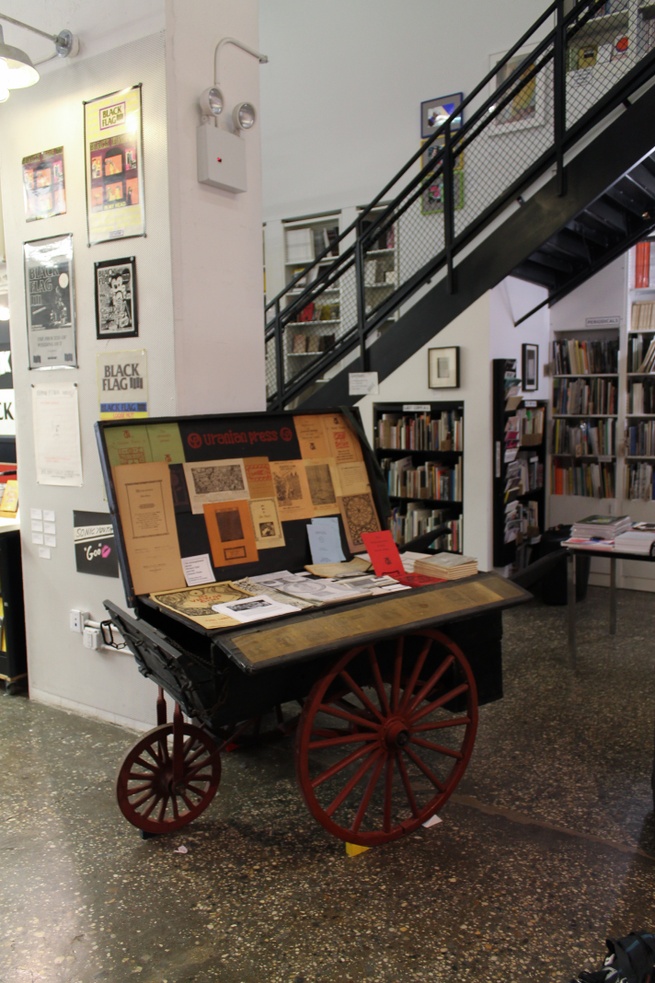 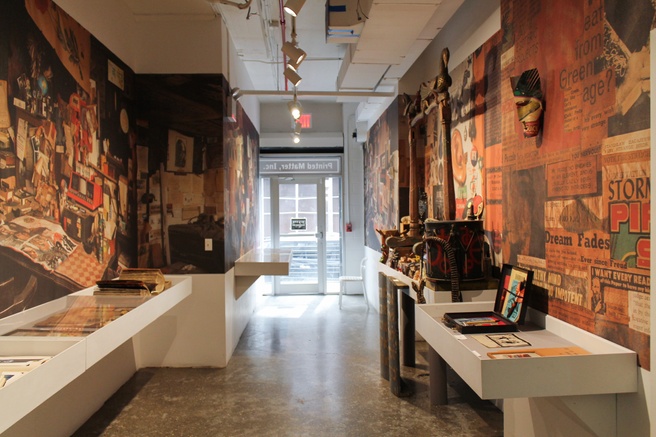 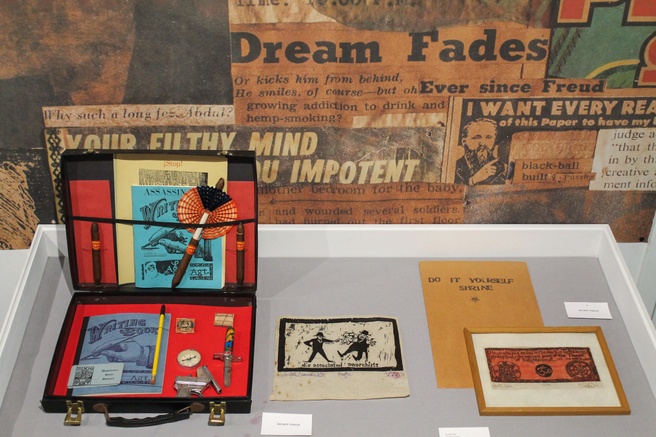 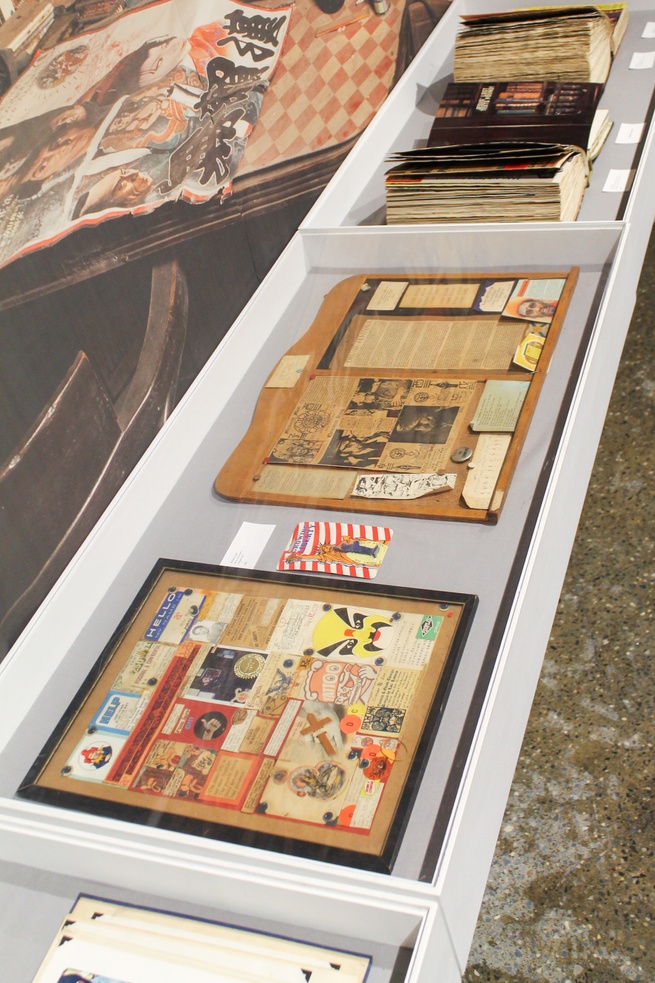 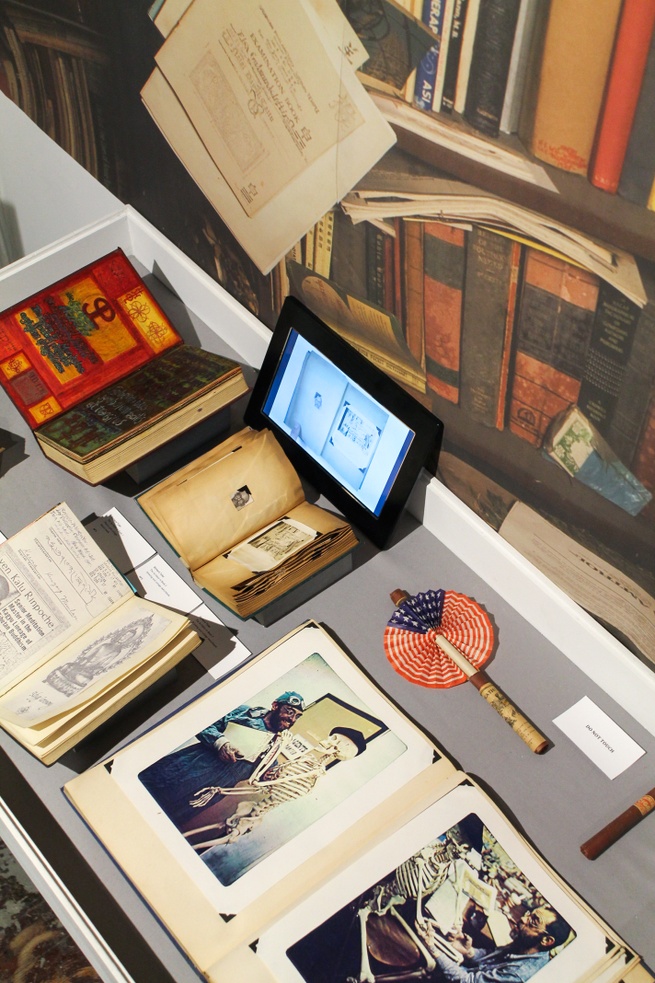 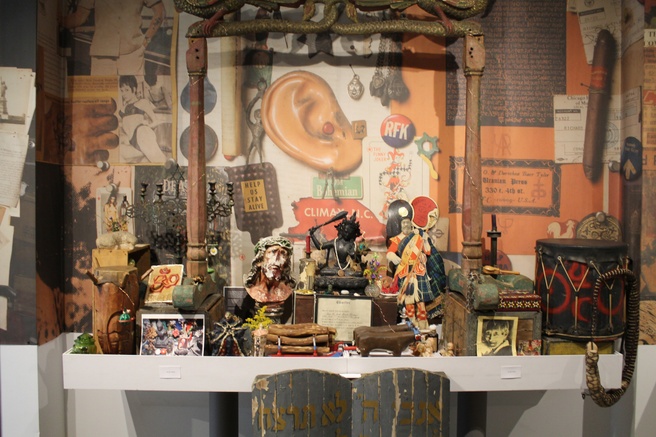 The Schizophrenic Bomb: Richard Tyler and the Uranian Press