Realize Your Desires: Underground Press from the Library of Stefan Brecht

Printed Matter presents Realize Your Desires: Underground Press from the Library of Stefan Brecht, an exhibition of alternative and independently-published newsprint periodicals from the early ‘60s to mid ‘70s.  Featuring work from nearly 30 presses with over 400 individual issues, the exhibition highlights both well-recognized and under-known publications, presented from the collection of the late poet, theater critic, and philosopher Stefan Brecht. The exhibition spans across Printed Matter’s back wall and adjoining project room, with hundreds of items available for purchase (several in complete or near-complete runs). The exhibition runs from June 18th through July 31. Please join us for an opening reception and viewing on Saturday, June 18, 5-7 PM.

Under the rubric of a loosely affiliated (and sometimes syndicated) ‘Underground Press’, these periodicals trace a powerful shift in a rapidly evolving cultural landscape. Usually published as weeklies – often in large editions – and broadly distributed locally and by subscription, the Underground Press provided a vibrant space for revolutionary ideas which played out on all fronts of politics and culture, and offered a searing response to many issues of the day. For the years it was active, the Underground Press served as a radical agent in the push for civil rights on a host of issues including, the anti-war movement, black power movement, women’s liberation, gay rights, sexual liberation, drug culture, and anti-colonialism/imperialism.

The publications of the ‘Underground Press’ emerged out of a specific historical moment. In 1966 a Supreme Court decision allowing that ‘offensive material’ was permissible if it was seen to have redeeming social value created a relatively tolerant legal climate in which the Underground Press was able to thrive. Within seven years amidst the Nixonian backlash against political and cultural dissent, a Supreme Court Decision in 1973 effectively reversed the previous ruling and a higher threshold of censorship contributed to the squelching of this vibrant cultural phenomenon. Realize Your Desires traces the rise of radical voices via the Underground Press into the early seventies, at which point it is supplanted by a more subdued ‘alternative’ press offering a broader catch-all coverage of news, culture and the arts from a mainstream liberal perspective, with much of its radicality excised.

The periodical format - particularly that of the Underground Press – provides a spontaneous and raw narration of an historic era “in real time”. These tabloids – with writing that was opinionated, heartfelt, and very often outraged – were not merely reporting on the issues of the day, but were the sites of commentary and critique that engendered and progressed the movement itself. This was the revolution in the first person, without an interest in posterity and without the misty lens of history.

Beginning with activist newsweeklies from the early 1960’s such as Dorothy Day’s Catholic Worker (founded in the ‘30s), the marxist Militant, and the anti-racist and anti-imperialist Muhammad Speaks, the exhibition follows the explosion of countercultural publishing that properly begins in 1967.

In the case of The Black Panther, the newspaper served as the official news service of the Black Panther Party, publishing twice a month on the black liberation movement and its battle with America’s racist legacy.  The militant tone - accompanied by the iconic graphics of Emory Douglas – addressed the systematic intimidation, disenfranchisement and killing of black people as it played out in the streets, in the court system, prisons, universities, and military. The ideological struggle chronicled in this tabloid was met with real violence unfolding on a weekly basis, as the group clashed with both police and federal agents.

In addition to the seminal East Village Other (1967- 1971), a broad selection of issues of its lesser-known downtown counterpart the Rat (or Subterranean Rat and Women’s LibeRATion) will also be on view. While EVO traced the trajectory of the Civil Rights and Anti Vietnam War movements as they intersected with hippie culture, drug culture and the psychedelic aesthetic, the editorial staff of the Rat transitioned to all-women and the paper transformed into a militant forum for the emerging Women’s Lib movement.

Gothic Blimp Works, a short-lived supplement to the East Village Other, was a rare tabloid-format vehicle for the nascent underground comic community featuring the publishing debuts of many leading protagonists in the comic scene. A rare complete run of eight issues are included in the exhibition.

The San Francisco Oracle and Oracle of Southern California took the “hippie” sensibility even further, with a commitment in counterculture, spirituality, new age, and poetry. The elaborate multicolor cover design and layout is an extraordinary example of a bright psychedelic aesthetic which would become a wide-reaching phenomena across popular culture. Featuring the experimental use of a split-fountain inking process which was operated with makeshift ink dams, the editors fed through multiple colors at once to create a drug-laced vision that matched the content.

Lesser known tabloids such as Other Scenes and Logos (from Montreal) deploy similar gradating color printing techniques and are likewise excellent examples of the emerging psychedelic sensibility.

Pornographic and Sex tabloids including Screw, the NY Review of Sex, Pleasure and Kiss were simultaneously news and cultural forums. Though at times arguably misogynist, these publications challenged sexual prohibition and repression, celebrated sexual expression and liberation, and pushed the permissible to the limit with raw representations of sex and sexuality.

Gay Power, the first queer weekly tabloid (1969 -1972) provides a rare space for gay cultural expression, produced in large editions. Featuring its share of erotica and pornography, Gay Power was also a powerful voice in the post-Stonewall era for its engagement in politics and culture and lifestyle around the gay community.

While not comprehensive, this collection of periodicals (and some accompanying posters) represents an incredible and eclectic range of countercultural positions. The Underground Press is unmatched for its first-hand view of how a society can be shaped and advanced from its very margins.

On Stefan Brecht All of the publications in this exhibition come from the library of Stefan Brecht (1924-2009), the son of German playwright and poet Bertolt Brecht. With a doctorate in philosophy, Stefan Brecht arrived in New York City in the early sixties to continue his research on Marx and Hegel, but quickly became enmeshed in the emerging experimental theater scenes. Brecht was both an active performer (in Robert Wilson’s company as well as Charles Ludlam’s Ridiculous Theater) as well as a fastidious chronicler of what he identified as a revolutionary cultural moment. This work would evolve into his lifelong project and unfinished series of books, the Original Theater of the City of New York from the Mid-Sixties to the Mid-Seventies.

Brecht had a penchant for many other spheres of the unconventional and controversial, as well as a discerning eye for the ephemeral and its role in representing history. As such, his collection of underground newspapers represents a broad – if not comprehensive – sampling of this remarkable period in independent publishing history

Realize Your Desires: Underground Press from the Library of Stefan Brecht is curated by Max and Solvieg Schumann. Printed Matter thanks Solveig Schumann and Sebastian Brecht for their assistance with and support of the exhibition.

Please write to news@printedmatter.org to more information, or to receive a list of available titles. 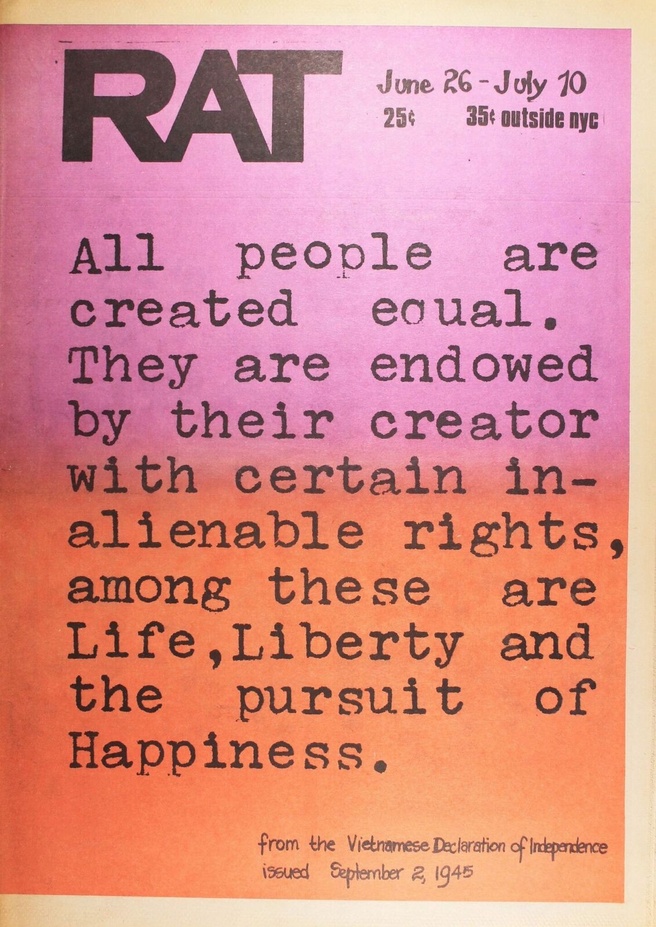 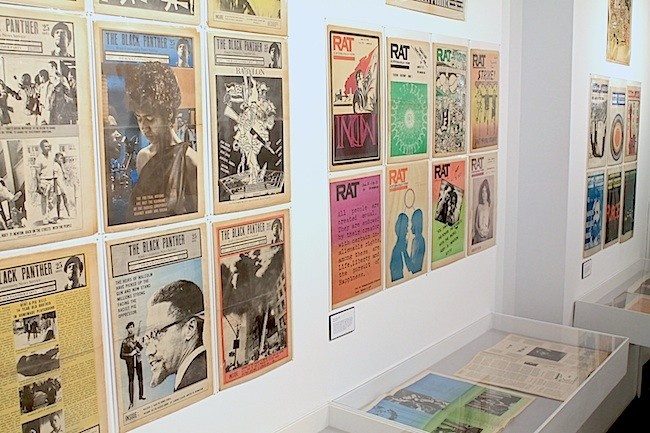 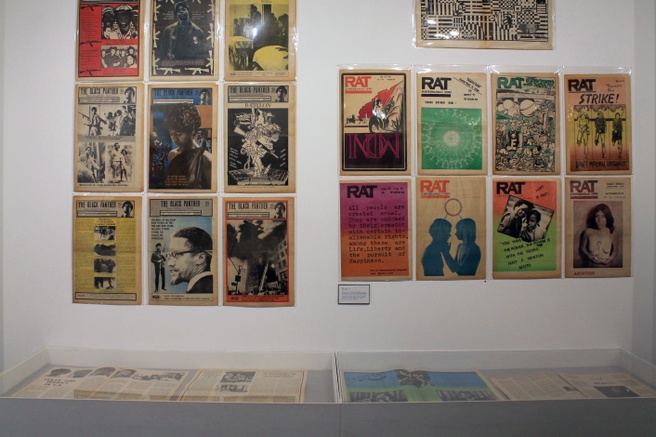 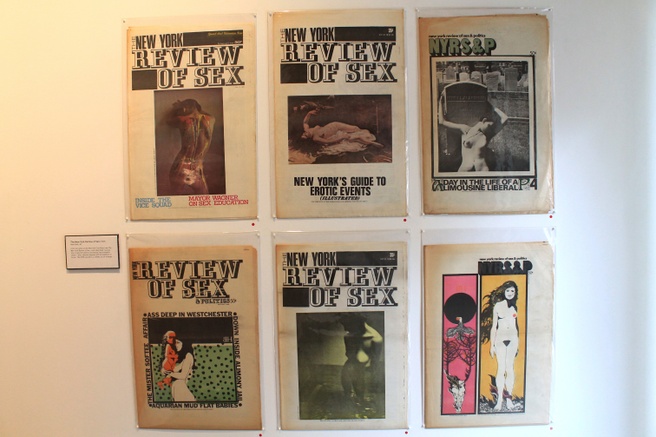 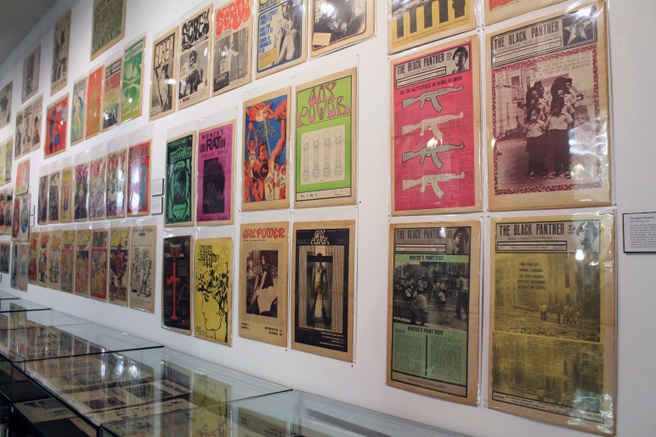 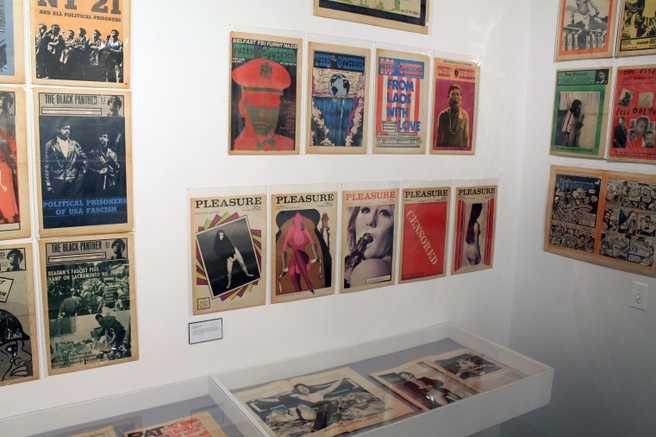 Underground Press from the Library of Stefan Brecht