We Live in Real Time: A Window Exhibition of Mail Art Made During the Pandemic

In April and May of this year, Printed Matter/St Marks put out an open call for mail art submissions with the prompt We live in real time. Mail art has a deep association with Printed Matter’s mission of circumventing the institutional spaces through which art is usually consumed by widely distributing artworks to be experienced within our daily lives. As a medium, mail art felt especially relevant at the outset of the COVID-19 pandemic—sending art through the postal system allows for a new type of physical connection between people, places, and ideas. On view now in the windows of our storefront at 38 St Marks Place at the Swiss Institute is an exhibition of selected mail art submissions that we received from around the world.

[Mail art] is a way to convey a message or a kind of idea to someone which is not verbal; it is not a confrontation of two people. It’s an object which is opened in privacy, probably, and the message is looked at … You look at the object and, depending on your degree of interest, it very directly gets across to you what is there … —Ray Johnson

It was in the late 1950s that standard letters and postcards, through a surge of creativity and in the spirit of anti-institutionalism, grew into what we now know as ‘mail art’. Consisting of postcards, envelopes, rubber stamps, stickers, collage, and other paper ephemera, mail art in fact only has one common characteristic: that it be circulated through the postal service.

Although its origins can be traced back to the Dadaists and Italian Futurists, New York artist Ray Johnson is considered by many as the founder of contemporary mail art. In the 1950s, he began sending out small-scale collages he called “moticos,” some of which included simple instructions for the recipient. The mail was often meant to be sent back, or forwarded to another person, creating effective chains of artistic correspondence.

Mail art proved to be successful in countering existing institutions and galleries. Artists began corresponding with each other, disseminating their art, and creating notoriety through this unconventional method. Thus, due to its explicitly populist and anti-commercial tenants, mail art found a place within the countercultural art movements of the 1960s and 1970s.

With this communal artistic concept and approach, circles of artists started to form all across the United States and abroad. Johnson’s own works and the consequent network of artists creating mail art came to be known as the New York Correspondence School. Another collective contemporary to the Correspondence School was Image Bank, founded in 1970 by Michael Morris and Vincent Trasov. Image Bank also used mail art as a means to create an alternative economy of artistic exchange. Members created gender-bending alter egos and responded to other members’ prompts with artwork that often incorporated wordplay and visual puns.

Mail art’s fusion of collage-making and performance made it a popular artistic practice amongst Fluxus artists of the late 1960s, such as Robert Watts, Ben Vautier, and Robert Filliou. They even created postal ephemera such as sheets of postage stamps, rubber stamps, and a “Flux Post Kit”. Through these experiences, Filliou coined the term “Eternal Network” in order to articulate how mail art had become a new form of international communication and social change.

Mail art, as a democratic response to the often elitist art world, attempted to dismantle the hierarchical system of museums and galleries. It was a populist form of art, allowing participation simply by writing a letter, sending a postcard, or responding to an open call for submissions. Today, the art form has expanded to include emails, faxes, and blogs. The distinctly democratic and inclusive qualities of mail art keep the form alive, even in our digital age. 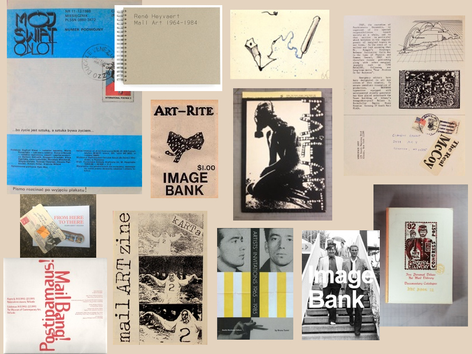 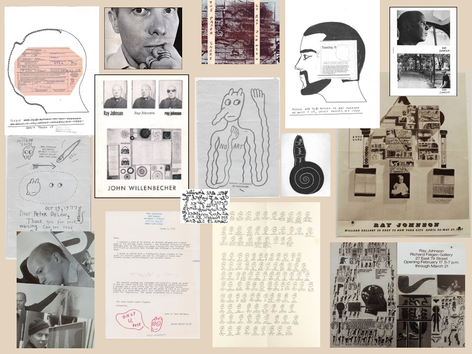