Slow Down Fast, A Toda Raja — A conversation with Camila Marambio and Cecilia Vicuña 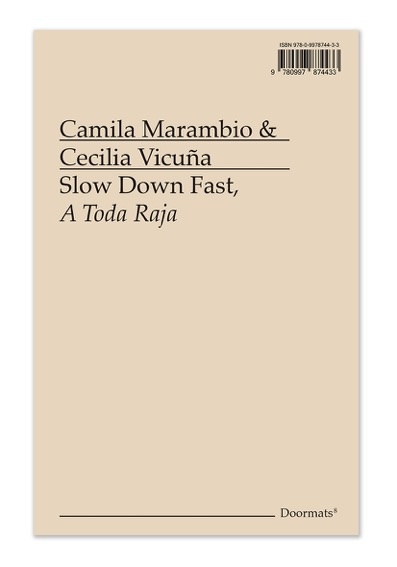 Printed Matter is pleased to announce a book launch for Slow Down Fast, A Toda Raja by Camila Marambio and Cecilia Vicuña, published by Errant Bodies Press as part of its Doormats series. Join the event on facebook here.

“This is a book of the female giggling that terrifies men.”

In this brilliant intergenerational dialogue, curator Camila Marambio and artist Cecilia Vicuña, one of the most intriguing Indoamerican artists of our times, converse about mestizaje/miscenegation, ecological disaster, eroticism and decolonisation in their multilingual, irreverent and humorous slang.

The result is a unique book that presents a conversation that is both poetic and critical. The particular dialogue presented in the book crosses over from Spanish to English, from poetry to academic argumentation, and from art to science. It proposes a necessary method for decolonial liberation, which reveals the transformative power of art in search of “an ecology of the soul, the resplendence of our connectivity to each other and the cosmos.”

The book, which they began working on in 2015 through recorded meetings that were then transcribed, was edited by Helen Hughes and published in Berlin by Errant Bodies Press, and will be presented at Printed Matter by Camila Marambio and Cecilia Vicuña.

Cecilia Vicuña’s work has addressed ecological destruction, human rights, and cultural homogenization, since her first poems and paintings, made in Chile during the 1960s. Her performances and installations, such as the Quipu (created in nature, streets, and in museums), combine ritual and assemblage elements in a practice that Vicuña calls lo precario (precariousness): transformative acts that bridge art and life, the ancestral and the avant-garde. Her paintings, poetry, and Palabrarmas (prints and collages that create new meanings by decomposing signifiers in words) all propose a free and futuristic vision considered pioneering indigenous decolonisation. Her work can be found in the collections of museums such as the Guggenheim and MoMA in New York, the Tate Modern, London, MoMA and the Guggenheim Museum in New York and the Museo Nacional de Bellas Artes in Santiago, Chile. Her first retrospective exhibition, Veroir el Fracaso Iluminado/Seehearing the Enlightened Failure, organised by the Witte de With Center for Contemporary Art in Rotterdam, the Netherlands, opened on May 26, 2019.

Camila Marambio is 68% Southern European, 10% Native American and 0.2% Scandinavian according to 23&me.

She was part of a magic circle according to Juan Esteban Varela.

She set up a laboratory for making time according to visitors at the Institute of Modern Art in Brisbane.

She has developed a method to communicate with beavers according to a peer-reviewed science journal.

She has stolen part of an artwork at Moderna museet in Stockholm according to an anonymous source.

She is developing an ecology of the soul according to Cecilia Vicuña.

She is queering cancer according to Nina Lykke.

She is a character in the novel Headless according to her own account. 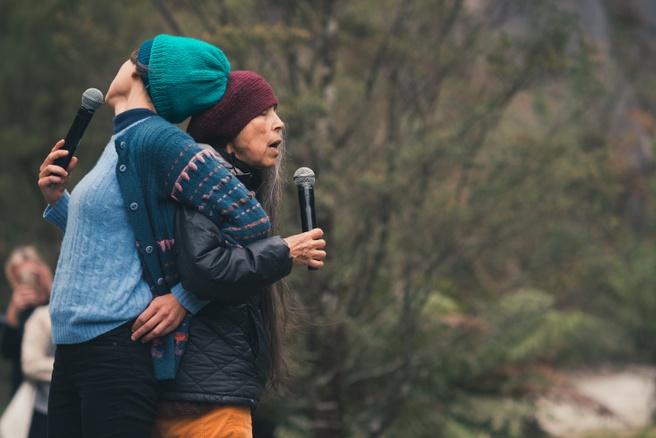 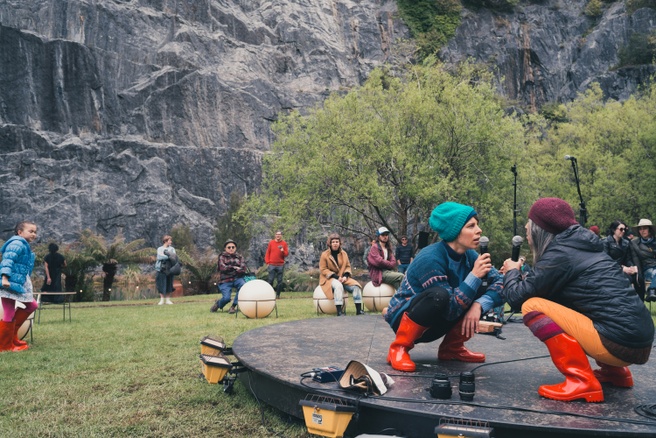