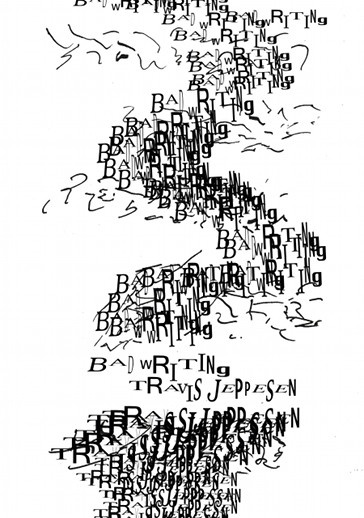 Travis Jeppesen’s Bad Writing is a collection of interconnected essays and “fictocriticisms,” many appearing in print for the first time, that etches a pathway for a truly radical “bad” modernism in art and literature. Erudite, witty, and occasionally controversial, Bad Writing reinvigorates the too-often staid medium of art criticism as an iconoclastic and inventive literary art form.

Travis Jeppesen is the author of the novels Victims, Wolf at the Door, and The Suiciders, as well as two volumes of poetry and a collection of art criticism, Disorientations: Art on the Margins of the “Contemporary”. In 2018, his book See You Again in Pyongyang, about his time living and studying in North Korea, was published. His essays and criticism have appeared in The New York Times Magazine, Wall Street Journal, New York Daily News, Artforum, Afterall, Art in America, Texte zur Kunst, Flash Art, Bookforum, Spike, Frieze, and Mousse, among other publications. In addition to his art criticism, he is known as the creator of object-oriented writing, a metaphysical form of writing-as-embodiment that attempts to channel the inner lives of objects. His first major object-oriented writing project, 16 Sculptures, was published in book format by Publication Studio, featured in the 2014 Whitney Biennial as an audio installation, and was the subject of a solo exhibition at Wilkinson Gallery in London. He is the recipient of a 2013 Arts Writers Grant from Creative Capital / the Warhol Foundation, and has taught as a visiting lecturer in Critical Writing in Art and Design at the Royal College of Art, where he completed his PhD in 2016. His calligraphic and text-based art work has been the subject of solo exhibitions at Wilkinson Gallery (London), Exile (Berlin), and Rupert (Vilnius). Jeppesen is based in Shanghai, where he teaches writing at the Institute for Cultural and Creative Industry at Shanghai Jiaotong University. His new collection of essays, Bad Writing, was recently published by Sternberg Press.

Sternberg Press grew out of the small publishing house known as Lukas & Sternberg, founded in 1999 by Caroline Schneider. With a focus on art criticism, theory, fiction, and artists’ books, the Berlin-New York based publishing endeavor was set in motion with a pocket book series— edited in part with Nicolaus Schafhausen. Dedicated to an expanded notion of writing on art,Sternberg Press has created a formidable platform in which practitioners from the fields of art and culture (architecture, design, film, politics, literature, and philosophy) can engage in a critical discourse. Each book is a special object celebrating creative publishing at its best, based on both meticulous editorial decisions and distinctive design. Through both commissioned and translated works, Sternberg Press seeks out the blind spots within contemporary discourse and offers a timely response to the related debates.