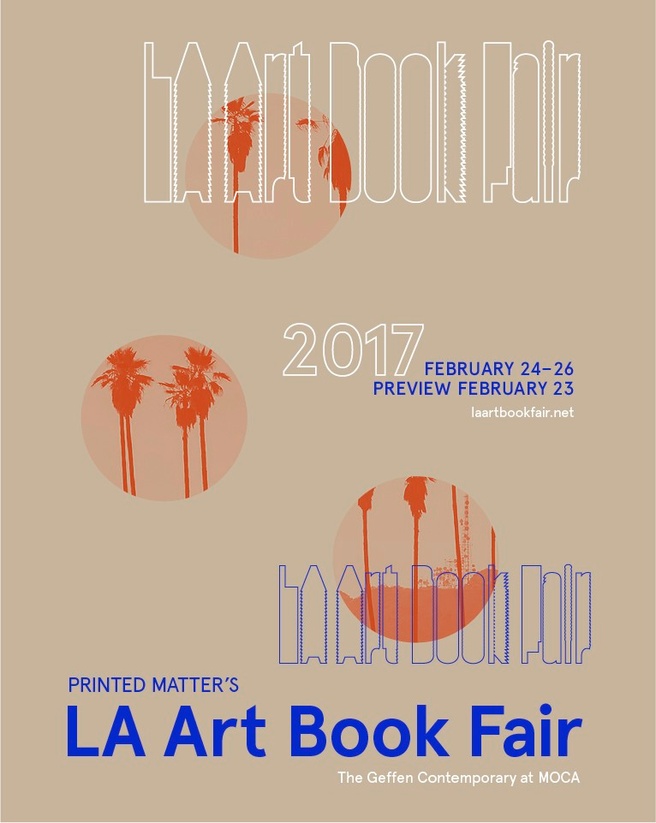 Free and open to the public, Printed Matter’s LA Art Book Fair is a unique event for artists’ books, catalogs, monographs, periodicals, and zines presented by more than 300 presses, antiquarians, artists, and independent publishers from over 20 countries.

THE LA ART BOOK FAIR PREVIEW Join us on Thursday, February 23, from 6 to 9 pm, at The Geffen Contemporary for a three-hour opening night preview, with special musical performances by Seth Bogart and Kembra Pfahler from The Voluptuous Horror of Karen Black.

Entry to the Preview will cost $10, proceeds going directly to support the fair. The first 2,000 visitors to pre-pay online or to pay at the door (while supplies last) will receive a Ticket Edition by artist Mike Mills.

Entry may be paid at the door (cash only) or booked online at printedmatter.org until 12 noon PST on February 23rd, 2017. If purchased online, you’ll receive your Ticket Edition when checking in at the Preview.

Visit laartbookfair.net for details on this and other special events.

LA Contemporary Artists’ Books Conference (CABC) The third annual LA Contemporary Artists’ Books Conference features a keynote address by AA BRONSON, titled MY LIFE IN BOOKS. An autobiographical romp through the world of artists’ books, from the 60s to today, from underground newspapers to queer zines, through the eyes and words of AA Bronson. From his beginnings in a free school and commune, through his 25 years as one of the artists of General Idea, his deep involvement with founding and developing collaborative and social structures such as FILE Magazine, Art Metropole, the LA Art Book Fair, and AA Bronson’s School for Young Shamans, as well as through his current collaborations with younger generations, he has focused on the politics of decision-making and on living life radically as social sculpture.

Additional Conference sessions include the following panel discussions: PRESERVATION AND ACCESS OF ARTISTS’ BOOKS IN THE ARCHIVE; X-TRA MAGAZINE ARTISTS ♥ BOOKS; and OPEN READING, a discussion of nonprofit artist spaces that exist outside institutional museums. In addition, the panel MAKING A SPLASH: WET MAGAZINE brings together the group of architects, artists, designers, performers, poets, writers, and bathers who collaborated on this unique magazine in Venice, California from 1976-1981.

Admission is free for all sessions, but space is limited. General admission is first-come-first-seated.

Friendly Fire A diverse group of politically-minded artists and collectives focused on the intersection of art and activism, this section includes: True Laurels (Baltimore); Other Forms (Chicago); ONE National Gay & Lesbian Archives at the USC Libraries (Los Angeles), and others.

The Box will be showcasing a selection of work from the Los Angeles Free Music Society (LAFMS), an experimental music collective founded by artists and musicians in Pasadena, CA in the early 1970s. Continuously active for 40+ years, the LAFMS is an integral part of the underground noise, experimental sound, music and art scenes in Los Angeles. The Box’s project space will include historic photographs, home-made instruments, recordings, visual art works, posters, and other ephemera relating to the LAFMS. In addition to a display of archival objects and artworks, the exhibition includes new material from the recently released project, LAFMS BOX BOX, a 13 LP box set composed of live performances during a major exhibition surveying the history of the LAFMS at The Box in 2012.

David Zwirner Books is proud to present a project space dedicated to Donald Judd Writings, which features an extraordinary library table designed by this legendary American artist and on loan from his home in Marfa, Texas. Co-published with Judd Foundation and edited by the artist’s son, Flavin Judd, the book is a remarkable and comprehensive compilation of Donald Judd’s writings, spanning from 1958 to 1993. Included are hundreds of previously unpublished notes, along with letters, early graduate school papers, and his more well-known essays.

Gagosian Gallery is pleased to present FLASH FLASH FLASH, an exhibition as tattoo parlor. Following the success of the same project at the NY Art Book Fair 2016, Gagosian has recruited six new artists, including Kenneth Anger, The Haas Brothers, Mark Mothersbaugh, and Analia Saban to create original flash art for the Los Angeles incarnation. Professional tattoo artists from the world famous Shamrock Social Club will be inking these specially commissioned designs inside the booth. Tattoos will be hand-numbered on the bodies of the purchasers, and once six people have a tattoo, the design will be retired forever. In addition to their permanence on patrons’ bodies, each original flash artwork has been produced as a limited print in an edition of six by The Lapis Press. Brian Roettinger has designed a special-edition book and relics acknowledging the authenticity of each tattoo for the project. In addition to a selection of Gagosian’s publications and rare materials from the gallery’s shop in New York, the tattoos, prints, and books will all be available for sale on-site at the fair.

Harper’s Books will curate a selection of books and ceramics, exploring the shared shelf-life of print and small sculptural objects.

Werkplaats Typografie will present a project that is specially invented, devised, appropriated, designed and performed on the occasion of the LA Art Book Fair 2017.

A full calendar of events will be posted online at laartbookfair.net

Teen Angels Magazine, Kill Your Idols and Printed Matter proudly present TEEN ANGELS, an exhibition around the artist known as Teen Angel, who began working full time as an artist and writer for Lowrider Magazine in 1977. His art graced the pages regularly and he soon became well known as ‘The Lowrider Artist’ amongst its underground culture. Teen Angel had a way of depicting the lifestyle in a fun whimsical way with his “Bubble Head” figures and colorful art. In 1981 he ventured into publishing on his own and started Teen Angels Magazine. Much edgier than Lowrider Magazine, Teen Angels Magazine featured artwork, dedications, photographs, poems and articles all focusing on life in the streets of the Varrios of California and the Southwest. Rejected by the larger chain stores, the only place to find Teen Angels Magazine was in liquor stores and bodegas in these neighborhoods. Teen Angel went on to publish over 200 issues, highly collectable today due to their rarity. He passed away in early 2015, but his legacy lives on through Teen Angels Magazine.

The exhibition will include original Teen Angels Magazine cover art, the entire collection of Teen Angels Magazine’s 200+ issues, artwork, model cars, miniature buildings and more, all created by Teen Angel himself, including many unpublished, never-before-seen, pieces of original artwork. In addition, there will be a new collaborative tattoo project featuring the artwork of Tamara Santibañez.

This exhibition is made possible by the generous support of LEVI’S.

Boo-Hooray presents The Living Theatre Archive In A Box. Collecting half a century’s worth of materials that document the work of one of the most influential theatre troupes in American history, this assemblage publication is unique as the contents are original materials preserved by members of The Living Theatre. These posters, handbills, programs, and photographs were designed and produced by members of the theatre parallel to art movements of the time spanning the early 1950’s through the 1990’s. The Living Theatre Archive In A Box is a numbered edition of 200 that contains dozens of posters, handbills, pamphlets, programs, and photographs contained within a stenciled box. Boo-Hooray will stage A Living Collage in their booth for the duration of the fair and give away Living Theatre posters in exchange for donations supporting Printed Matter.

Moran Bondaroff presents The Sabian Exercise, 1971-72 by George Herms. From April 1971 to April 1972, George Herms made a drawing a day for one year based on Sabian symbols. Each day takes the form of one symbol as a starting point, and expands upon it within each degree of the zodiac circle. The exercise draws out the rhythm and formal qualities of the symbols, to assign new and personal meanings and associations, in the method of concrete poetry. In 1979, the drawings were collected and published into hand-painted box sets in an edition of 1,000. Having been in storage for the last 40 years, this will be the first time The Sabian Exercise will be presented to the public in the form of an immersive installation created by this iconic California artist.

In Support of Books is an exhibition of contemporary bookends. In seeking out the peripheries, ephemera, and supporting structures of book culture, Norma — a multi-disciplinary design practice based in Los Angeles — has produced an exhibition of contemporary Bookends from an international assembly of Product, Object and Industrial designers. As a project, In Support of Books seeks multiple outcomes: to publicly survey a single typology of design object; to lay bare the publication-based references of the exhibitors; and to begin a series of inquiries that explore the objects associated with the reading, display, and appreciation of [art] books. The exhibition will be accompanied by a printed catalog with essays by artist Erik Benjamins and Laura Houseley of Modern Design Review, and will also showcase publications from each participant’s canon — arranged, of course, in between and among the bookends in question.

Hours and Location The LA Art Book Fair is free and open to the public: