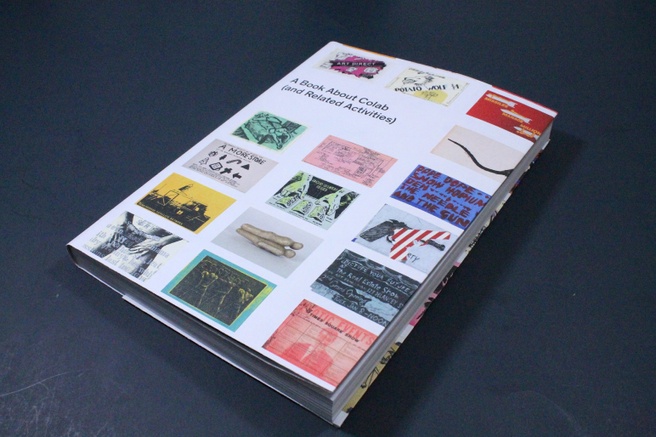 Printed Matter is pleased to announce the publication of A Book About Colab (and Related Activities). Edited by Max Schumann, Director of Printed Matter, and with a Foreword and Afterword by art writer and Colab member Walter Robinson, the book traces the output of Collaborative Projects Inc. (aka Colab), the highly energetic gathering of young New York downtown artists active from the late 1970’s through the mid 1980’s.

A Book About Colab serves as an exhaustive homage to the group’s work and a testimonial about their particular practice of collaboration, collectivity, and social engagement, while reflecting an iconic period of NYC cultural history. Advocating a form of cultural activism that was purely artist driven, the group created artworks, negotiated venues, curated shows, crafted their own PR, and engaged in discourse that responded to the political themes and predicaments of their time, among them the recessions of the 1970’s, the Reagan era of budget cuts and nuclear armament, the housing crisis and gentrification in New York City, and other pressing social issues.

In form, A Book About Colab captures the busy energy of the group as it focused on a battery of overlapping projects staged in artists’ lofts, vacant storefronts and abandoned buildings, as well as on the airwaves and in print. With extensive documentation of the printed material and media (posters, books, ephemera, films, broadcasts) steadily produced in the course of their collaborative undertakings, A Book About Colab offers a vivid account of the diverse aesthetics and concerns of the group as they embarked on X-Magazine, The Real Estate Show, The Times Square Show, the A. More Store, the cable access TV show Potato Wolf, and a myriad of other projects.

To illustrate the broader reach of the group, the book also explores a number of Colab-related efforts which took place in addition to their communal activity. Artists’ initiatives such as Fashion Moda, the New Cinema, Spanner Magazine, and ABC No Rio, while not purely Colab projects, derived their vitality from its members and reflected the spirit of that community.

In keeping with the democratic “by and for artists” ethos of Colab, the publication places this material alongside newly solicited texts from many of the group’s members – a mix of reflections and anecdotes, statements, manifestos, and excerpts from the ‘Colab Annual Report’, which provide a close perspective on the meaning of Colab for those who came into its orbit.

A Book About Colab (and Related Activities) is published by Printed Matter, printed full color, paperback, 256 pages, in an edition of 1000 copies. The book features a two-sided color wraparound cover, with the interior showing a selection of Fingerpaint Portraits of Colab group members by Cara Perlman.

The publication is a companion piece to the exhibition A Show About Colab (and Related Activities), organized by Schumann at Printed Matter, October 15-November 30, 2011.

Printed in Canada by The Prolific Group.

A Book About Colab retails for $39.95 and is available here.

Printed Matter is extremely pleased to announce Money Creates Taste?, a collaborative fundraising edition by Jenny Holzer and Tom Otterness. Funds raised by the sale of the edition will go to support Printed Matter’s new publication A Book About Colab (and Related Activities). The sculptural work incorporates a variation of a Truism written by Holzer in 1978, (around the time of the founding of Colab), and re-works a visual motif that Otterness developed in the mid 80’s (around the time that Colab was winding down its activities). The combined elements of two figures struggling over a coin, accompanied by the text “Money Creates Taste?”, provides playful and rich allusions to the internal polemics of the artists’ group itself, as well as to the socio-economic context from which Colab arose, and which still has such profound resonance today.

The near-miniature work is a bronze casting with gold plating, measuring 2.75 × 3 × 1.5 inches, in a signed and numbered edition of 9. Please write to news@printedmatter.org for information on availability and price.