Printed Matter is pleased to present an exhibition of works by artists Eve Fowler and Sam Gordon. The show will focus on the artists’ books, posters, video works and original artworks that the artists have created independently and as part of their ongoing collaborative practice. An earlier version of the exhibition was previously mounted at USC Roski School of Fine Arts. On view at Printed Matter from May 4 – May 25, a concurrent presentation will be shown at Feature Inc. on the Lower East Side. Join us for an opening reception with the artists, Saturday, May 4, 5-7 PM, featuring a reading organized by Katerina Llanes with poets and writers Jess Arndt, Corrine Fitzpatrick, Paul Legault and Litia Perta.

The exhibition will gather the complete inventory of Fowler’s newsprint zines alongside Gordon’s collection of photo books and artists publications. Works from Fowler include a series of untitled photocopied books showing a collection of portraits investigating gender, identity and lesbian subculture. Gordon includes his oversized Warhol scrapbook, Artist in Residence: Giverny / Tennessee, and a B&W publication compiling 100 portraits of Walt Whitman. Fowler and Gordon have also created THE FOWLER / GORDON READER, a small print publication and PDF gathering various texts and images derived from their previous projects including reprints of their respective interviews in North Drive Press.

The Printed Matter window will feature overlapping posters from the two artists. Fowler’s A Spectacle and Nothing Strange is a series of brightly-colored letterpress posters with fragments of text taken from Gertrude Stein’s Tender Buttons. The lively phrases –“A difference of very little difference”, “Very like the last time”, “There are the ones who do see me,” and so on – are scripted over a range of colorful gradients, both queer and challenging for their focus on language and flexible meaning. Produced by the now defunct Colby printing, a commercial printer in LA, the posters were distributed by Fowler throughout the city in the spirit of concert promos and other advertisements, taking on a public life that is at once faux-informational and underhandedly poetic.

In 2012 during a visit to Los Angeles to host a 24 hour screening at the Mandrake of The Lost Kinetic World, Gordon’s ongoing video project capturing art moments, Fowler and Gordon began their collaboration by putting Gordon’s sweepings from his studio onto Fowler’s posters. Riffing off Fowler’s text appropriation, Gordon choose a recent poster of Karl Holmqvist’s which samples lyrics of Patti Smith, a poster of Stephen Prina’s, and an early poster of Dean Daderko’s pulled from his archive and selected with the idea that text would be the link between. Original works that take posters and zine ephemera as the starting point are also on view. Fowler will show two large-format acrylic on wood panel works from the Tender Buttons series. Gordon will show Street Vendor, a mixed media painting including bleach, acrylic paint, spray paint, and inkjet transfers, on sewn clothes and canvas remnants which depicts the zines and books by other artists in which his work is included.

Also as part of the window installation videos from the artists will be screening. Sam Gordon has been documenting art moments, events, and exhibitions for almost a decade now. The Lost Kinetic World, Volume 1, is the first in a series of art world video records that chronicle the art the artist has experienced. Likening the video to a magazine disguised as a movie, Gordon describes the piece as a free-form poem coalescing the scope of possibilities within a multitude of contemporary art practices; video as snapshot. Running parallel, Gordon’s 1000 Sketchbook Pages turns scans from his ongoing sketchbooks into a slideshow loop. Fowler will debut a video which recreates one of Warhol’s more infamous experimental films. 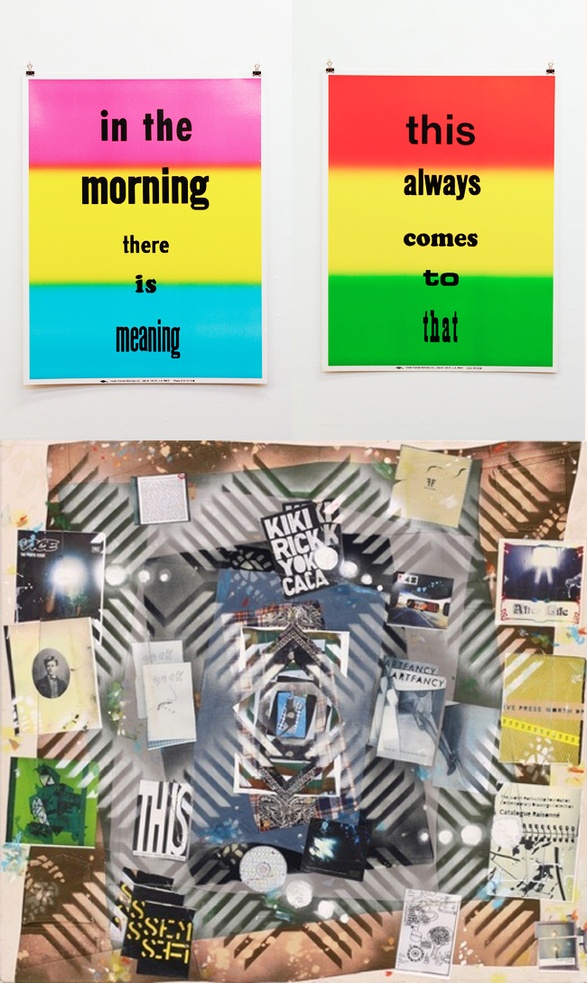