IN BETWEEN SPACES - An exhibition by E.B. Itso

Printed Matter is pleased to announce IN BETWEEN SPACES, the first solo show in the US by Danish artist E.B. Itso. The exhibition presents more than 40 titles produced by the artist over the last decade, including self-published booklets, zines, posters, and pamphlets, as well as experimental artists’ books and book works. To coincide with the opening of the show, Itso will release a new photographic zine Soil published with Printed Matter. The exhibition will be on view March 15 - April 12, with an opening reception Saturday, March 15, 5-7 PM.

E.B. Itso’s work is interested in people and places that exist in the periphery. His visual output is shaped by a profound care for the mundane and overlooked, as well as a fascination with the strange and hidden. Through his own photographic work and artistic collaborations, Itso looks at the uncharted people and places that exist in any city and country, giving a rare voice to the corners of society. In addition to his Xeroxed and staplebound publications and pamphlets, the exhibition presents larger pieces including Murmellemrum (Inbetweenwalls), 2010, a suite of works including a book, a photo diptych, and a framed painting made from red pulverized brick. Along with Mount Cavernous, 2013 - a book work, slide projection, and three photographic prints in handmade frames - these pieces engage our relationship to space with an implicit social critique, questioning the dominant perception of what formulates a good life and a sustainable society.

In addition to working with the artist-book as medium, E.B. Itso also works within the field of photography, urban construction, film, and public messages.

IN BETWEEN SPACES is guest-curated by Emilie Nilsson. 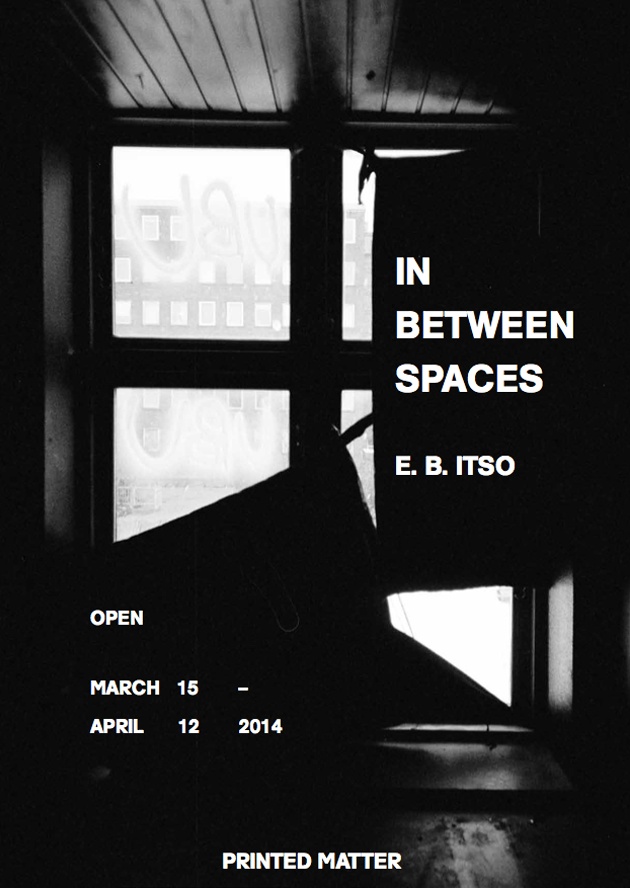 IN BETWEEN SPACES by E.B. Itso