Printed Matter is pleased to announce After Reasonable Research, an exhibition of artists’ books and related material exploring the encyclopedic form. The show opens February 9th and is on view at the storefront through the 26th. Please join us Thursday, February 17th, 6:30 PM, for a talk by UK publisher, editor and writer James Bridle, who will speak on cultural heritage, Wikipedia, books and systems of knowledge. Richard Nash, former editor of Soft Skull Press and publishing entrepreneur, will give an introduction and moderate a conversation following Bridle’s presentation. Printed Matter is located at 195 Tenth Avenue, between 21st and 22nd Street in New York City.

After Reasonable Research forms a radical reference library with an interest in accumulated knowledge. The collected books explore systems of classification, asking how information can be parsed and accommodated into expressive formats that describe content as much as deliver it. Images and text are exhaustively compiled (a number of the works span multiple volumes), often accompanied by charts, lists, annotations and appendices. Some act as compendiums—a working index to a field of knowledge—but all stand as artworks awash with imprecision, personal narrative, rigorous and semi-rigorous research, fiction, and all the compulsions that make these encyclopedias, in a sense, factual.

In Parallel Encyclopedia Batia Suter has created an encompassing work with images from old encyclopedias and scientific manuals, sequencing thousands of photos according to a shifting resemblance of form. Josh Smith’s 28-volume Untitled (Encyclopedia) compiles an eccentric mix of photocopies, newspaper clippings, cut-down Yellow Pages and office-supply catalogs, resulting in the idea of an encyclopedia as filtered through the artist’s hand. Sol LeWitt’s photos in Autobiography—square format and arranged in a grid—represent an attempt to document every possession in the artist’s New York living and studio space. James Bridle’s 12-volume The Iraq War: A Historiography of Wikipedia Changelogs charts the complete edits (12,000 of them) made to the Wikipedia entry on the Iraq War between 2006-2009.

Each work in After Reasonable Research presents a way for reading a system, a codex that can be overlaid so that new links and likenesses start to emerge. While short of a scientific record, the books commit to their own kind of truth. The extravagant gesture of the encyclopedic form conveys a particular kind of beauty, dealing at its core with how information, people and forms relate in extraordinary ways. 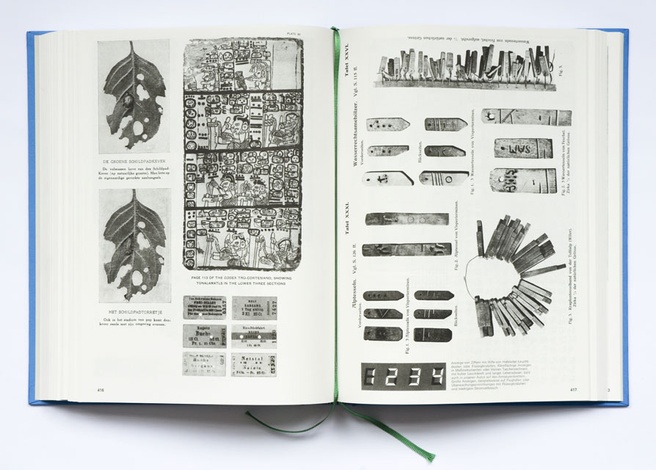