A Blade of Grass presents STTLMNT: An Indigenous Digital Occupation 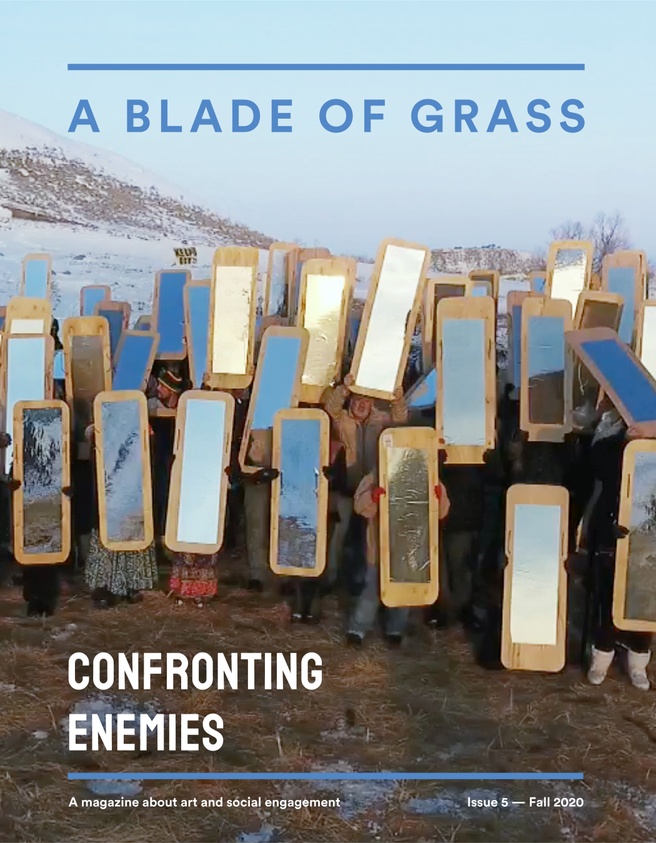 Join moderator Prerana Reddy, A Blade of Grass Director of Programs, with organizing artist Cannupa Hanska Luger and collaborators for a preview of Settlement’s representation of complex, living Indigenous cultures, and the Indigenous-led new media, theory, and contemporary art “digital occupation” taking place at www.sttlmnt.org. A project two years in the making, originally planned as month-long encampment in Plymouth, UK, to take place this summer within the context of the commemoration events for the 400th anniversary of the Mayflower’s voyage to the so-called “New World,” Settlement was intended to go beyond conversations of decolonization and actively practice Indigenization as a radically immersive onsite experience. With the onset of the Covid-19 pandemic, the participating artists have nibly adapted their projects to instead engage this issue over the fall and winter through a succession of online performances, artist discussions, social engagement, mini docs, and new work that invite audiences, globally, to engage with the diverse, complicated, and intersectional art and reality of the Indigenous peoples of North America and the Pacific.

The 90-minute event on Zoom will include a live performance of new music by Laura Ortman; screening of a trailer and discussion with filmmaker Razelle Benally, who has traveled around the country documenting artists at home; a discussion of active, non-extractive, collaborative creative work with Settlement artists Cannupa Hanska Luger, Marie Watt, and Emily Johnson; concluding with perspectives from UK collaborators Karen and Fiona Evans, known as The Conscious Sisters, discussing their Clan-Kind project that helps people living in Plymouth develop a deeper connection between place & community by bringing together diverse groups to learn about the natural or built heritage, including acknowledgement of legacy of indigenous Welsh heritage. The event also includes an opportunity and call to action to participate in the each/other collaborative artwork, under the direction of Luger and Watt, to be featured in their forthcoming dual-exhibition at the Denver Art Museum in 2021.

The event is presented by Settlement, with special thanks to its US Producer, Ginger Dunnill and A Blade of Grass. Participants will also receive a digital copy of the fall 2020 issue of A Blade of Grass Magazine, “Confronting Enemies,” featuring an interview with Prerana Reddy and Cannupa Hanska Luger, available also for download on abladeofgrass.org/magazine/ and printedmatter.org

Razelle Benally is an emerging independent filmmaker dedicated to creating stories with strong Indigenous female protagonists and hopes to bring a new perspective to the male-dominated film industry that has a history of marginalizing Indigenous peoples. She has helped facilitate several film workshops with Native youth in Oregon, South Dakota and New Mexico. She was the 2010 Santa Fe Indian Market jury-awarded winner for Best Documentary in SWAIA’s Classification X and is an alumna of the 2012 Sundance Institute Native Filmmakers Lab as well as an awardee of the 2015 Sundance Institute Native Short film Production Grant for her most recent completed work I Am Thy Weapon. Benally’s 2015 Short Film The Blanket was the 2016 New Mexico Film Foundation’s Student Showcase winner for Best Narrative, Best Actor, and Best Overall Film of the Showcase. I Am Thy Weapon also won SWAIA’s 2016 Classification X: Best Short Narrative.

Emily Johnson is an artist who makes body-based work. She is a land and water protector and an activist for justice, sovereignty and well-being. A Bessie Award-winning choreographer, Guggenheim Fellow and recipient of the Doris Duke Artist Award, she is based in New York City. Originally from Alaska, Johnson is of the Yup’ik Nation, and since 1998 has created work that considers the experience of sensing and seeing performance. Her dances function as portals and installations, engaging audiences within and through space, time, and environment—interacting with a place’s architecture, peoples, history and role in community. Johnson’s writing has been published and commissioned by ArtsLink Australia, unMagazine, Dance Research Journal (University of Cambridge Press); SFMOMA; Transmotion Journal, University of Kent; Movement Research Journal; Pew Center for Arts and Heritage; and the compilation Imagined Theaters (Routledge), edited by Daniel Sack. She is part of a US based advisory group—including Reuben Roqueni, Ed Bourgeois, Lori Pourier, Ronee Penoi, and Vallejo Gantner—who are developing a Global First Nations Performance Network.

Cannupa Hanska Luger is a New Mexico based multidisciplinary artist who uses social collaboration in response to timely and site-specific issues. Raised on the Standing Rock Reservation in North Dakota, he is of Mandan, Hidatsa, Arikara, Lakota and European descent. Luger produces multi-pronged projects that take many forms—through monumental installations that incorporate ceramics, video, sound, fiber, steel, and repurposed materials, Luger interweaves performance and political action to communicate stories about 21st Century Indigeneity. This work provokes diverse audiences to engage with Indigenous peoples and values apart from the lens of colonial social structuring, and often presents a call to action to protect land from capitalist exploits. He combines critical cultural analysis with dedication and respect for the diverse materials, environments, and communities he engages. Luger is a 2020 Creative Capital Fellow, a 2020 Smithsonian Artist Research Fellow, the recipient the 2020 A Blade Of Grass Artist Fellowship for Socially Engaged Art and the recipient of the Center For Crafts inaugural Craft Research Fund Artist Fellowship for 2020.

Laura Ortman (White Mountain Apache, lives and works in Brooklyn, New York) is a soloist and vibrant collaborator who works across recorded albums, live performances, filmic and artistic soundtracks, and is versed in Apache violin, piano, electric guitar, keyboards, and pedal steel guitar, often sings through a megaphone, and is a producer of capacious field recordings. She has performed at The Whitney Museum of American Art and The Museum of Modern Art in New York, The Toronto Biennial in Ontario, the Musée d’Art Contemporain de Montréal, and the Centre Pompidou, Paris, among countless established and DIY venues in the US, Canada, and Europe. In 2008 Ortman founded the Coast Orchestra, an all-Native American orchestral ensemble that performed a live soundtrack to Edward Curtis’s film In the Land of the Head Hunters (1914), the first silent feature film to star an all-Native American cast.

Marie Watt is an artist and citizen of the Seneca Nation with German-Scots ancestry, which informs her work and process deeply. Her layered points of influence are reflected in her artwork, particularly text elements featuring language pulled from and discussing Indigenous knowledge and Iroquois protofeminism, the matriarchal structures of certain Native American tribes, the rise of social activism throughout the 20th century, and the anti-war and anti-hate content of 1960s and 1970s music. Watt holds an MFA in painting and printmaking from Yale University; she attended Willamette University and the Institute of American Indian Arts; and in 2016 she was awarded an honorary doctorate from Willamette University. Watt’s work has been on view in 2020 at: The Whitney Museum in the exhibition Making Knowing: Craft in Art, 1950–2019, the Yale University Art Gallery in Place, Nations, Generations, Beings: 200 Years of Indigenous North American Art, the Renwick Gallery of the Smithsonian American Art Museum in Hearts of Our People: Native Women Artists.

The Conscious Sisters is a socially engaged arts company based in Plymouth, UK, which produces unique art projects working with and for the community. Work is produced by actual sisters Karen, a multimedia artist, and Fiona, a photographer/filmmaker, Evans. The sisters love collaborative working with communities and specialise in work that explores identity, drawing from over 40 years of experience of inclusion and race work. Their project Clan Kind was inspired by the Settlement project and working in partnership with Cannupa Hanska Luger, to develop a deeper connection for the people of Plymouth between place & community by bringing together diverse groups to learn about the natural or built heritage in their neighbourhood in a participatory and unexpected way.

A Blade of Grass is a national arts non-profit established in 2011 that nurtures socially engaged art through direct financial support to artists, advocating for artists working in the field, and creating digital and print media, documentary films, public programs, and research. For more information, please visit www.abladeofgrass.org. 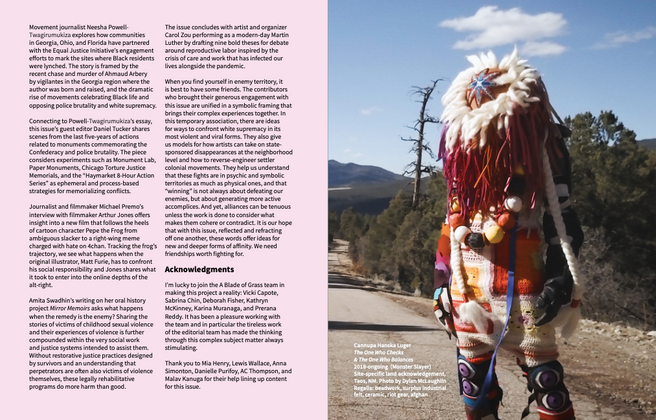 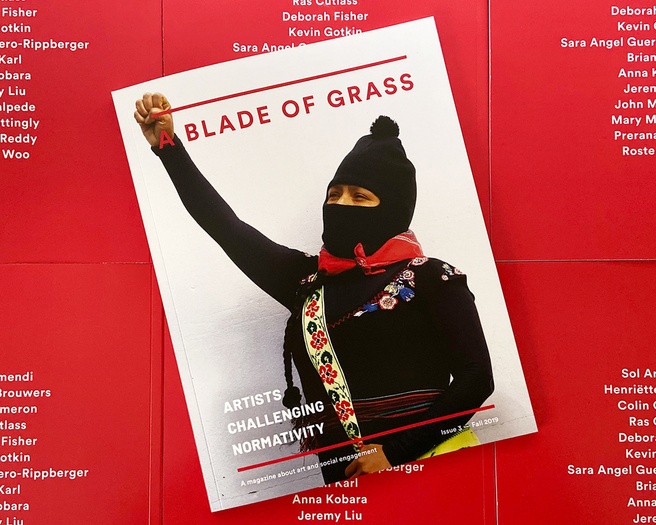 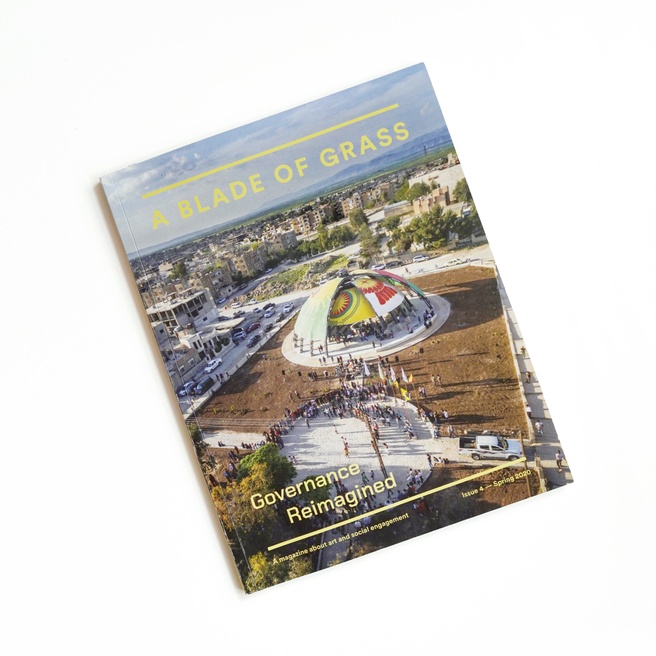 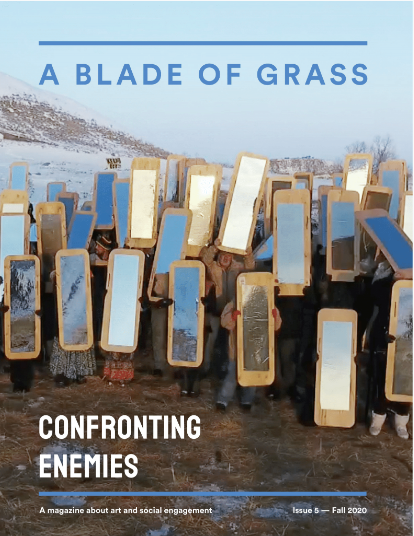 A Blade of Grass Magazine Issue 5