Although we are in undesirable and difficult circumstances, this time of pause also presents us with a valuable opportunity to look back and to look inwardly. Printed Matter is initiating a research and presentation series on our own history and the history of artists’ books. We begin this series with Sol LeWitt and a discussion by Printed Matter’s Chang Yuchen on his practice and articulation of conceptualism; his subversive yet elegant usage of book form; and his masterful ability to translate his vision into a political ideal, an aesthetical tendency and an administrative structure— the coherence of which resulted in the founding of Printed Matter.

A Selection of Printed Matter Ephemera

1) Art-Rite #14 Winter 1976/1977
Art-Rite was edited by co-founders Edit Deak and Walter Robinson who were also founding members of Printed Matter, which was just coming into being when the issue came out. The issue was devoted to the theme of artists’ books and included “Idea Poll"—a collection of statements on artists’ books by fifty artists and art professional connected to the medium, which featured such luminaries as Kathy Acker, John Baldessari, Ulises Carrión, Agnes Denes, Douglas Huebler, Sol LeWitt, Lucy Lippard, Richard Kostelanetz, Adrian Piper, Caolee Schneeman, and Lawrence Weiner among others. LeWitt, Lippard and Steir were also members of Printed Matter’s founding group.

3) "Idea Poll” Manuscript
When Lucy Lipppard left New York in the early 1990s, she dropped off several boxes filled with material related to Printed Matter, including much from its formative years—a treasure trove for Printed Matter’s institutional archive. This is the original hand-annotated manuscript of Lucy Lippard’s statement for the “Idea Poll” in issue #14.

7) Judy Rifka Card
The last issue of Art-Rite (#21) was an artist’s project by Judy Rifka, in which she made hundreds of original drawings and collages on blank Art-Rite covers. This is an announcement card for an installation of a sampling of the artworks that Judy presented at Printed Matter on Lispenard St in 1980. Edit DeAk and Walter Robinson, the co-founders and editors of Art-Rite, were also among the founding members of Printed Matter.

8) Press Release for Vigilance
An early collaboration between Printed Matter and Franklin Furnace was the exhibition Vigilance, which focused on artists’ books with political and social themes. The exhibition was co-organized by Lucy Lippard and Mike Glier, and was staged at Franklin Furnace with supplemental programs at both spaces, including a Guerilla Art Action Group window installation at Printed Matter. Artist Mike Glier was an early Printed Matter staffer who did sales, packing and shipping, and trips to the post office amongst the many other chores of the fledgling PM; Glier would later serve as a long-standing Printed Matter board member. This is the original copy of the press release for Vigilance.

9) Original Manuscript for Vigilance
And here is the original manuscript of the Vigilance press release with handwritten annotations from the Lucy Lippard files in Printed Matter’s archive.

10) Vigilance Newsprint Flyer, front
This is the front and back of the Vigilance newsprint flyer designed by Mike Glier on the occasion of the exhibition, which includes the curatorial statement, a bibliographic listing of the books in the exhibition, an addenda to Printed Matter’s 1979 catalog, and an announcement of an artists’ book display at the MoMA Library. Clive Phillpot, an advocate of experimental and accessible artists’ books, was the new Director of MoMA Library at the time as well as a Printed Matter board member, and was beginning to develop one of the leading artists’ book collections in the world at the library.

12) Promotional Mailer, front
This promotional mailer from 1982 was photographed and designed by Nancy Linn, then Director of Printed Matter. She was also doing volunteer work in the Pediatric Department at Bellevue Hospital at the time which she folded into her practice as an artist and photographer. Nancy was a critical presence at Printed Matter during its early years and continued her involvement by serving on the Board into the 1990s while she continued to pitch in with bookkeeping and photographing books for Printed Matter’s mail-order catalogs.

14) Gift Certificate
This photocopied handbill created sometime in the 1980s functioned as a gift certificate during the holidays. We have no idea how it worked. This was from Printed Matter’s pre-computer era when the inventory was organized in a card catalog system, with the bibliographic information typed out on index cards with hand annotations recording the quantities received and sold.

15) Press Release Flyer for Printed Matter Windows
From 1977 to 1989, Lucy Lippard curated Printed Matter’s storefront windows on Lispenard Street to supplement the public and accessible format of the artists’ books within. Rotating on a tight one-month schedule, the window installations provided an early career platform for many now influential and widely known artists, including Jenny Holzer, Richard Prince, Barbara Kruger, Mary Kelly and Felix Gonzalez-Torres among others. Lippard invited artists and made selections from proposals with an eye towards topical, social, and political themes including housing issues & gentrification, militarism & nuclear disarmament, police brutality, domestic violence—all still with us today. This photocopied press release-cum-announcement flyer was for the late activist-artist Paulette Nenner’s window installation. Nenner was also a member of the Collaborative Projects collective (aka Colab).

17) Statement from Ingrid Sischy
Printed Matter’s first Director was the late Ingrid Sischy, who would later rise to prominence in New York City’s arts and culture worlds as Editor-in-Chief of Artforum and later Interview Magazine, which she stewarded from 1989 to 2008. As Director of Printed Matter, Sischy helped establish Printed Matter as a 501©(3) non-profit organization and continued to stay involved as a Board member through the 1980s. This photocopied handbill is a promotion for Printed Matter’s 1983/1984 complete mail order catalog, with a statement by Sischy.

18) Barbara Kruger Matchbook, front
This is a promotional mailer Printed Matter produced for a set of matchbooks by Barabara Kruger, published by Rhona Hoffman gallery in 1986. We’re not sure who designed the card, but it may well be Kruger herself!

20) 10th Anniversary Announcement Card
Here’s the announcement card for Printed Matter’s 10th anniversary in 1986, designed by Jenny Holzer. The celebration was held at the Great Hall at Cooper Union and featured readings by a number of artists and performers including Eric Bagosian, Constance DeJong, John Giorno, Cookie Mueller and Richard Prince.

22) Promotional Card for Last Mail-Order Catalog
This promotional card was for Printed Matter’s last mail-order catalog representing the complete inventory. With Printed Matter’s inventory rapidly expanding, the production of the full inventory catalog had become a laborious and time consuming task that was no longer possible to support. Printed Matter continued to produce numerous pared down print catalogs and brochures into the early 2000s, at which time it transitioned to an online catalog with the growth of e-commerce. Printed Matter’s catalogs, brochures, and flyers comprise one of the broadest print bibliographies of contemporary artists’ books, and reflect the evolution of the form in real-time.

23) Hand-rendered Workflow Chart
In 1986, Printed Matter transitioned from a paper-based inventory and invoicing system to a custom-made computer system in R:Base, moving all inventory, supplier, and customer records into the digital realm. This made for a far more efficient way to manage and track the distribution operations, and even automate consignment calculations and payments en masse. This hand-rendered workflow chart was produced right around the time of the transition to computer. Though many of Printed Matter’s operations have evolved since then, there is a structural similarity to the overall organization, and a number of the tasks and protocols remain in place today.

24) Lawrence Weiner bookmark, front
Lawrence Weiner produced this bookmark for Printed Matter shortly after we moved from Lispenard St to Soho and began an 11 year partnership with Dia Center for the Arts. This was one of many projects Weiner did with Printed Matter over the decades, and originally the bookmark was given out for free with a purchase. 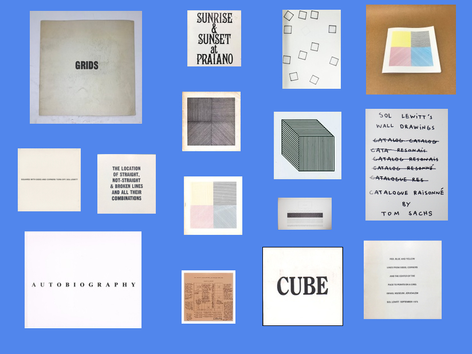