IN RELATION TO PROBABLE USE : 1. an artist may construct the work, 2. the work may be fabricated, 3. the work need not be built 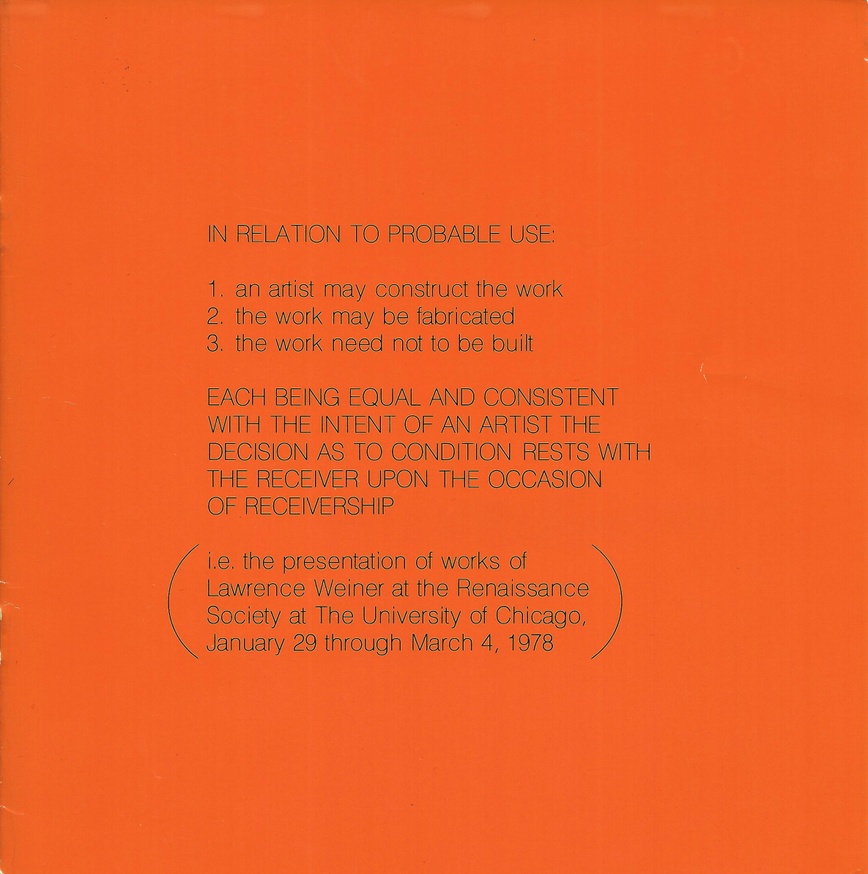 This offset-printed, staple-bound catalogue was designed by Lawrence Weiner himself to be included in his first one-man show in Chicago at the Renaissance Society at The University of Chicago, January 29 through March 4. 1978. Although short, spare, and seemingly straightforward at first glance, the publication soon reveals itself to be meticulously designed: Weiner has attentively numbered, oriented, and aligned its text and images so as to maximize disorientation and engagement, boldly yet subtly reworking and activating the reading experience.

“Weiner, who was among the first to use language as a medium for creating works of visual art, believes it is irrelevant whether or not an art object is ever made as a result of his linguistic propositions. … Weiner has received international acclaim among conceptual artists and critics for the emphasis he places on the content, or idea presented, in each piece. … One room of the gallery will be given over to new work, created especially for this exhibition. Other works in the show were done over a longer period of time, and reveal the subtlety and complexity that is possible within Weiner’s chosen medium.” — The Renaissance Society

“Since 1968, when he concluded that the actual construction of a work was not critical to its existence in the world, Weiner has authored hundreds of linguistic artworks. … Weiner realized that the essence of a work is textual and not physical. … In a radical restructuring of the traditional artist/viewer relationship, Weiner shifted the responsibility of the work’s realization to its audience, while also redefining standard systems of artistic distribution. A work … can be made or merely spelled out on a museum wall, but it can also be read in a book or heard if uttered aloud. Weiner’s art can literally be disseminated by word of mouth. Much of the early work rehearses simple actions involving basic substances—pouring paint, digging trenches, removing plaster—and, like all subsequent examples, are stated in the past tense to avoid the authoritative tone of a command.” — Nancy Spector, Guggenheim

Out of Print: Conceptual Classics, Early Pop and Performance (prices are approximate)

Out of Print: Conceptual Classics, Early Pop and Performance (prices are approximate)