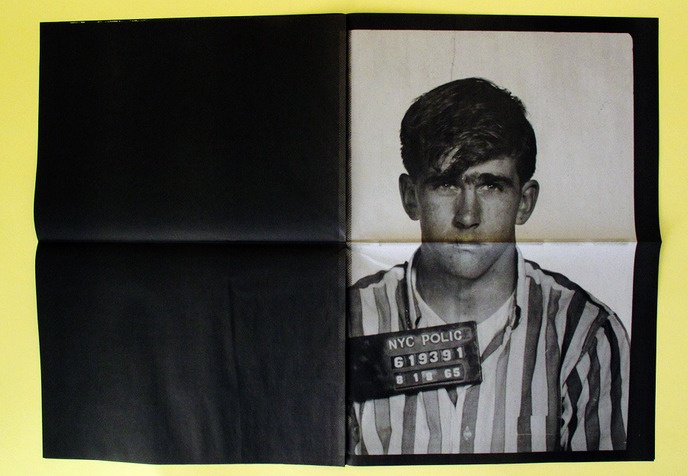 Please log in.
$10.00 ($9.00 for members)
Add to cart
Add to table Facebook Tweet
Nowork publishes anonymous work related to New York City. In this edition, a dark black oil-paper opens up to a series of large-format mug-shots, providing a stark understanding of the NYC penal code and its modes of representation.

The books featured on this table all deal with criminality by exposing the complexity of crime. As a group, the works illuminate the various perspectives that create the idea of criminal culture.

Some take a humorous approach to lawlessness. Rita MacBride’s Crimeways plays with the idea of the detective novel, telling the tale of a New York under siege by an underground band of aesthetic criminals who threaten to destroy a landmark in the name of art. Meanwhile, Dale Whittig’s Law & Order Special Victims takes the tone of a fan-fiction zine. The work turns the table on the show’s characters by exhibiting the criminal behavior of the crime fighting heroes, a far cry from the show’s regular narrative progression.

Other books refer to real people and authentic criminal acts. Blotter, by NO WORK, is a collection of actual mug shots of NYC criminals. In Redheaded Peckerwood, Christian Petterson combines his own photographs with archival images to re-enact a gruesome three-day killing spree. The book traces the movements of 19-year-old Charles Starkweather and 14-year-old Caril Ann Fugate who murdered ten people, including Fugate’s family, on a trek across Nebraska to the point of their capture in Douglas, Wyoming in 1959.

Season of Violence Volume 1 and Men in the News #33 compiles lists of criminals, the former seeking a kind of retribution or absolution in highlighting the faces of war criminals, the latter attempting to expose the repressive uses of a state’s definition of “a crime.”