A Box of Smile [White] 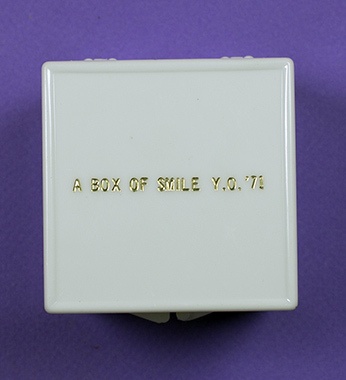 Please log in.
Out of stock
Add to table Facebook Tweet
This is an authorized continuation of the Fluxus edition begun in 1971 by George Maciunas. White plastic boxes are gold-stamped across the outside with “A BOX OF SMILE Y.O. ‘71”, and open to reveal a mirror with a reflection of your own smile.

Yoko Ono is considered to be one of the most influential artists of her generation, sustaining an active art practice since the the early 1960s which has focused primarily on performance, writing, and music. Early instruction-based works like Grapefruit helped to define a new set of parameters for the Fluxus generation, which has had a lasting impact on conceptual art. Included here is the brand new facsimile reprint by MoMA of that 1964 work, as well as an authorized continuation of Ono’s A Box of Smile, which George Maciunas started in 1971 (signed and unsigned, in black and white), plus other publications, multiples and posters.