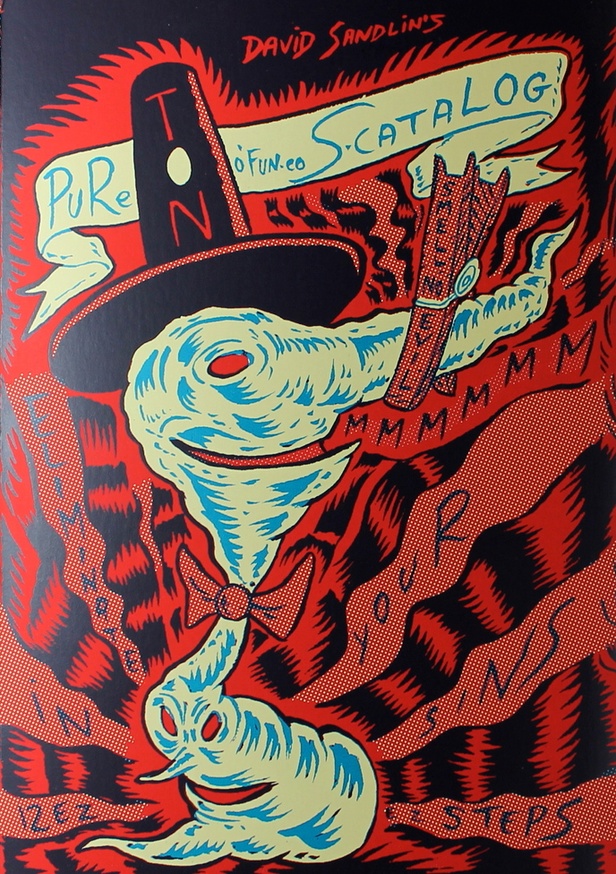 Big Red Pure Ton O’ Fun Co. Scatalog is an artist book by David Sandlin. This book is risograph printed and includes a hand screen printed book cover. Big Red Pure Ton O’ Fun Co. Scatalog is a series of complex illustrative drawings which are a sartorial critique of repentance and sin. The humorous tone of the drawings are reminiscent of punk ethics and culture. Sandlin uses aspects of artist comics, satire, and fine art printmaking in order to produce a book which can appeal to audiences of all of the aforementioned realms while standing firmly as a work of art and cultural criticism.

David Sandlin was born in Belfast, Northern Ireland, in 1956, and has lived in the United States since 1972. He has been painting, printmaking, and creating installations since moving to New York City in 1980. Sandlin is a professor at the School of Visual Arts. His paintings, prints, books, and installations have been exhibited extensively in the U.S., Europe, Japan, and Australia. His work has also been published in the Best American Comics 2012 and 2009, New Yorker, the New York Times, RAW, and other publications. A recipient of a 2014 Guggenheim Foundation Fellowship, Sandlin has also received numerous grants and honors, including a fellowship with the New York Public Library’s Cullman Center for Scholars and Writers and the Lamar Dodd Chair of Art at the University of Georgia.