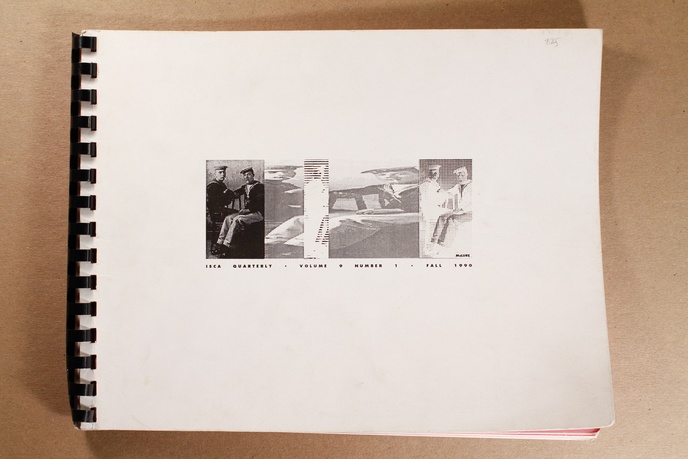 I.S.C.A. Quarterly _ is a periodical of copier art edited by Louise Odes Neaderland. This particular issue, Volume 9, Number 1, was published in September 1990. Each issue was devoted to a particular copier technique, this issue is devoted to photography/xerography and each print included in the volume is based on a personal photograph, a favorite photograph, or a news photograph. I.S.C.A. is the International Society for Copier Artists. _I.S.C.A. Quarterly is the journal of the I.S.C.A. and operated as a non-profit organization located in New York City. It was produced four times each year in September, December, April, and June from 1982 to 2003. The contents of each issue are composed of artist contributed prints in limited editions of 150.

Historically, issues were produced in limited editions of 200 copies, with an average of 45 pages of original copier art supplied by I.S.C.A. members. Over the years the form of the _I.S.C.A. Quarterly _ transitioned from a collection of unbound pages to a spiral bound journal and eventually included an Annual Bookworks Edition which included of a box of books made by I.S.C.A. artists. The artwork produced for the _I.S.C.A. Quarterly _ varied from social and political issues to personal and emotional themes.

Louise Odes Neaderland (b. 1932) is an artist, photographer, printmaker, book artist, and the founder of the I.S.C.A. and editor of I.S.C.A. Quarterly _. She also curated a traveling exhibition of xerox art, _ISCAGRAPHICS. Neaderland earned a BFA from Bard College in 1954 and earned her MFA from the University of Iowa in 1957. She was awarded the Norfolk Fellowship from Yale University for printmaking in 1952. In 1986, Neaderland received a grant from the National Endowment for the Arts in artist bookmaking. Neaderland began using the photocopier to make artwork in 1972 at the Women’s Studio Workshop and by the 1980’s she had gained recognition as a xerography artist. Neaderland has authored numerous limited edition books and her work is collected by the Museum of Modern Art, the Metropolitan Museum, the Getty Center, and the Brooklyn Museum.

Louise Neaderland and the ISCA Quarterly

Louise Neaderland of New York City is the founder and Director of the non-profit group International Society of Copier Artists (1982-2002). The organization’s mission was to recognize and promote the use of the copier as a creative tool, regularly putting out xerographic prints and artists books through their assemblage publication The ISCA Quarterly.

Louise Neaderland and the ISCA Quarterly