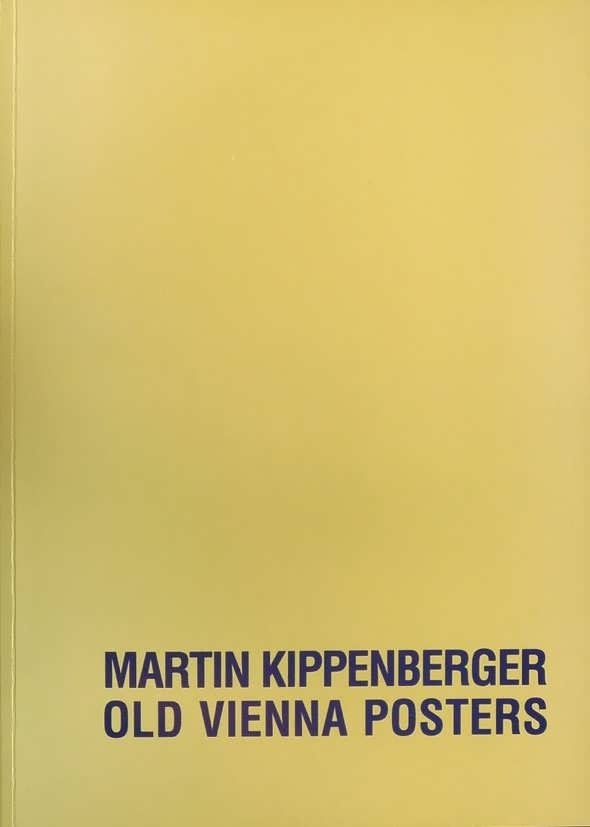 Martin Kippenberger was an artist best known as a member of the German enfants terribles (along with Albert Oehlen, George Herold, and Günther Förg, among others), who produced a large oeuvre of work in a wide range of styles. From colorful, loose paintings of single subjects (including a man with a gauze head-wrap, a brain, and a puppy) to large-scale public sculptures with humorous undercurrents (such as a full-scale staircase angled to appear as if it is jutting out of the ground), Kippenberger made a point of constantly shapeshifting his practice. In addition to this, he founded Kippenberger’s Office, along with Gisela Capitain, which put on a series of exhibitions in Berlin throughout the late 1970s and early 1980s; was the business director of SO36, a performance and music space; was a member of the punk band the Grugas; and regularly collaborated with the artists signed to Hetzler gallery, providing insight to expand their programming.

In Old Vienna Posters, each spread zooms in on a specific element of a commercial ad or poster, such as a woman’s leg in a bikini, a wine bottle, or a dining room set with chairs. He removes all other contextual information of the print, leaving only an isolated component, printed with fine Ben-Day dots in red, blue, and yellow. Perfect bound, the book was published in an edition of 200 by Grazer Kunstverein.