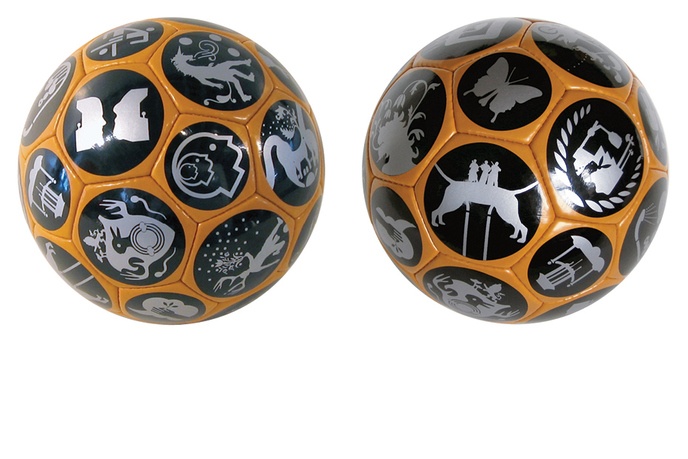 This table features a selection of artists’ multiples from Jenny Holzer, Yoko Ono, General Idea, Sherrie Levine, Claes Oldenburg, Barbara Kruger, David Robbins, and others. Including: -An Oldenburg miniature soft sculpture drum-kit, edition of 200, signed and numbered. “The scale of this version of the Soft Drum Set was determined when I was attempting, in June 1967, to visualize by drawing, what a soft drum set might look like-in preparation for making the large version. I found the effect impossible to imagine and therefore to draw, and so had the original of this edition sewn up to guide me. It could be called three-dimensional drawing.” -Oldenburg’s Geometric Mouse, Scale-D “Home Made” from 1971. This die-cut 3d work can be assembled into movable cardboard object. The piece is a reproduction (2/3 size) of the prototype made in preparation for a fabricated black metal work by the artist. -Two Parkett editions from the early 1990s, including Sherrie Levine’s miniature pair of shoes in leather and suede, produced after she found and sold pairs of small shoes in a gallery in New York, and Cindy Sherman’s edition featuring a silken greasepaint grotesque that bursts from the frame. -A first edition of Printed Matter’s fundraising edition bag, silkscreened with an image from Barbara Kruger. The work features a close-crop of a snarling canine mouth with the text, “Business as Usual”. On the reverse is Printed Matter’s Wooster street address, where we once enjoyed the luxurious gallery-sized space via the DIA Foundation.