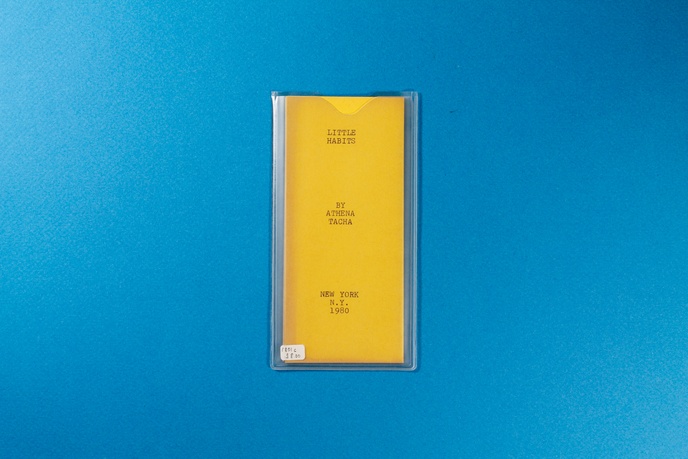 Please log in.
Out of stock
Add to table Facebook Tweet
Part of Athena Tacha’s small book series, this book seaks to the artist’s dislikes of certain irritating habits.

Printed Matter is pleased to present an exhibition of artists’ books by Athena Tacha. The presentation features the complete run of publications by the artist, including long out-of-stock titles new to Printed Matter as well as items that have been distributed by the organization since the 1970s. The focus of Tacha’s practice ranges broadly. She examines abstract geometries, creates intimate narratives, and builds scientific records. The mediums Tacha utilizes are as diverse as her subject matter, and her talents as photographer, sculptor, author, designer and architect are evidenced in the diversity of publications she has produced over the past four decades. Many of the works featured here are a part of Tacha’s pocket books series and present titles that read like poetry: Little Pleasures, Adolescent Loves, Different Notions of Thriftiness, Life’s Layering, Vulnerability, Tragic Cats. The accounts within each are meditations on a particular aspect of life, describing ordinary acts and phenomena such as scratching dandruff from the scalp, considering which groceries to buy in the supermarket, or the appearance of wrinkles with age. Tacha’s reflections bring to light the broader implications of these seemingly commonplace events, making allusions to the ecological, sociological, and political impacts of our personal choices and emotions and visa versa. Just as often, Tacha’s reflections stay within the intimate scope of the act or object described and leave the reader to draw their own conclusions. In contrast to the psychological self-portrait developed in the pocket book series, Tacha also has produced a physical/physiological self-portrait throughout a series of artists’ books. Gestures, Expressions, The Human Body : An Invisible Ecosystem and Heredity Studies I and II examine the human body. These titles record variations of hand and facial positioning, genetic variation within nuclear families, and the diverse micro-organic fauna that live on and in the human body. The more architectural, spacial and abstract areas of Tacha’s practice are exemplified in Dictionary of Steps, Spacial Disorientation: Staircases and Ramps, and Ten Projects for Staircases (Tacha’s first book, never before available through Printed Matter). An exhibition of Athena Tacha’s titles will be on display at Printed Matter from March 18th through April 19th. See more of her work on her website, and read / listen to a great piece by Rebecca O’Keefe which features audio recordings of Tacha’s thoughts on writing, aging, public art, and her contemporaries. Athena Tacha is originally from Larissa, Greece and currently lives in Washington DC.