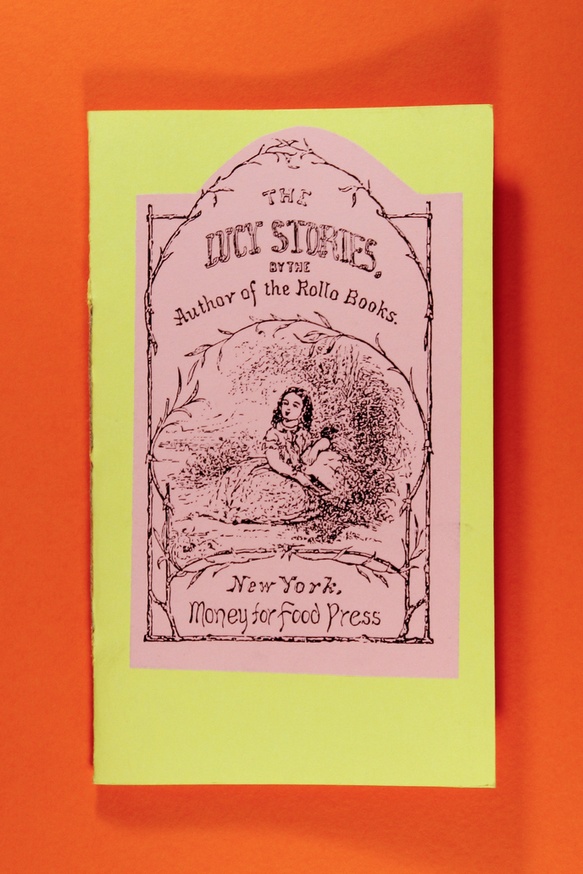 Please log in.
$50.00 ($45.00 for members)
Add to cart
Add to table Facebook Tweet
In The Lucy Stories, Buczak pairs short vignettes of the 1980s New York art scene with Victorian drawings. The stories follow Lucy through her days as she shops, curates, and decides what’s for dinner. Narrated with an Alice in Wonderland-like naivety, the sweetness barely masks Buczak’s critical edge. Written in English. Stitch bound. 22 pages.

The Late Edition: Twenty Years of Dissemination at Printed Matter

As Clive Phillpot tells the story in Artist/Author (1996), it begins here:

In April of 1963, Ed Ruscha published Twentysix Gasoline Stations 1962. It was a small paperback containing pictures of gas stations dotting U.S. Route 40, the road between Oklahoma City, where the artist grew up, and Los Angeles, where he lives and works. The work hinged on a highly personal alphabet, but perhaps the most notable thing about the book was this: it was a book.

Ruscha continued to produce books of a similar ilk throughout the ’60s. With them, he helped to forge a medium that was cheap, accessible, reproducible, and portable. After Twentysix Gasoline Stations 1962, Ruscha took the further step of refusing to sign or number his books. Additionally, he practiced a mode of production that allowed him to flood the art market and thus depreciate the value of his work from time to time. It was called an open edition – and it simply meant the artist would make more copies of his work whenever he felt like it. One such time was in 1967, when Ruscha printed an additional 500 copies of his seminal artist’s book. He did it again in 1969. The book retailed for $4.00.

Founded in 1976 and incorporated as a non-profit in 1978, Printed Matter’s mission was “to foster the appreciation, dissemination, and understanding of artists’ books and other artists’ publications.” Now, almost 30 years later, Printed Matter, much like most of the New York art scene, is no longer in SoHo. The contemporary art scene no longer revolves around the geography of cheap rent in Manhattan simply because there is no more cheap rent in Manhattan. Of course, Printed Matter is still alive, well, and well on its mission, but the nature of the store’s merchandise has necessarily shifted with the times. For example, Twentysix Gasoline Stations 1962 is still in stock. However, one might say the price has been adjusted for inflation. Today, the book retails for well over $500.

As the store gears up for another move, just around the corner, it seems as ripe a time as any to take stock of the last 30 years. While the price of Twentysix Gasoline Stations 1962 may have increased by a factor of over 230, the store is still packed with artists’ books that adhere to its original aesthetic. In a neighborhood of spare and sterile galleries, Printed Matter remains a space that provides a very tactile experience. The art here is meant to be held, opened, and taken for a test drive, as scores of molested display copies can attest to. This display is a small sampling of such books, from Tony Rickaby’s 1975 oeuvre to Edie Fake’s 2005 Foie Gras.

These books may not be the flashiest or shiniest objects in the store. Their authors may never be the subjects of solo museum retrospectives. Yet, for all the variety and time between the production of each of these books, they are first and foremost just that: artists’ books. Each work here is undeniably concerned with its format. Bound or unbound, diptych or otherwise, each of these works hinges on the meaning, definition, and cultural significance of the book itself.

In the instance of Address Book, the take is almost painfully analogue and intimate: real names, numbers, and personal facts spill out, rudely exposed and somehow dead in the past tense. It is almost as though it were photocopied for a court case. On the other end of the spectrum, beaut.e (code) prints programmers’ remarks about the beauty of programming on keypunch cards. It is at once an ironic, again analogue, presentation of interview material and a subtle comment on the future of the book and the printed word – the old modes by which such information was conveyed.

Similarly, Mom Leaves Baby On Bus places our level of reading and contemplation on those great moving billboards of the city: the sides of buses – hence the elongated rectangular shape and punchy copy. Teach Your Child To Tell Time uses New York Times jewelry ads to put a political slant on the old gloss, “time is money.” Rather than giving the time on each timepiece, the price of each watch is stamped in blood-red letters across the page.

Some books, such as Missing Persons and UnMatched Halves, rip apart the process of page turning and linear narrative simply by ripping apart their pages. Meanwhile, Louise Neaderland’s work is represented here for its contribution to Xerox Art. In addition to her Missing Persons, La Strada takes the reader for a walk with a flip of a graduated page, while Empress Bullet finds the speed and doomed momentum of a loose horse at the Aqueduct. A Book Of Short Stories floats by like a late Brakhage film.

Ich Rufe Morgen An uses repetition as content. Every page is cloyingly identical: the reader is treated to over 200 copies of the same grating, precious, cereal-ad moment of an attractive woman feeding a bathrobe-clad man something in a spoon. As in advertising, the value of this image is played out by its reproduction. Bodies and Souls partakes in the same sort of mimesis with respect to scale, rather than sameness.

The Lucy Stories and Too Much Is Not Enough were each made with a painstakingly intimate touch; Rescue Of Panicky Victim is stubbornly, perhaps bizarrely, low-tech. Tail Bone Raw falls somewhere in between. Double Bind is positively literal while A Game of Chess is pure metaphor.

Despite and because of this scope and variety, each work seems to challenge the one right beside it, the one right before it, and the one right after it to uniquely contain an idea. These concepts are then inextricably linked to the presentation of content. Furthermore, that content’s relation to books themselves, in form and in function is inherently called into question.

This is by no means a formula or a definition. It is simply a proper end result: each of these works has a conscious, charged relationship to the term “artist’s book.”

The Late Edition: Twenty Years of Dissemination at Printed Matter