Seeing Power: Art and Activism in the 21st Century 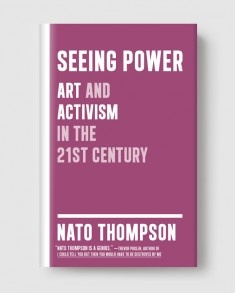 A fog of information and images has flooded the world: from advertising, television, radio, and film to the information glut produced by the new economy. With the rise of social networking, even our contemporaries, peers, and friends are all suddenly selling us the ultimate product: themselves.

Here curator and critic Nato Thompson interrogates the implications of these developments for those dedicated to socially engaged art and activism. How can anyone find a voice and make change when the world is flooded with images and information? And what is one to make of the endless machine of consumer capitalism, which has appropriated much from the history of art and, in recent years, the methods of grassroots political organizing and social networking?

Highlighting the work of some of the most innovative and interesting artists and activists working today, Thompson reads and praises sites and institutions that empower their communities to see power and re-imagine it. From cooperative housing to anarchist infoshops to alternative art venues, Thompson shows that many of today’s most innovative spaces operate as sites of dramatic personal transformation. - Melville House