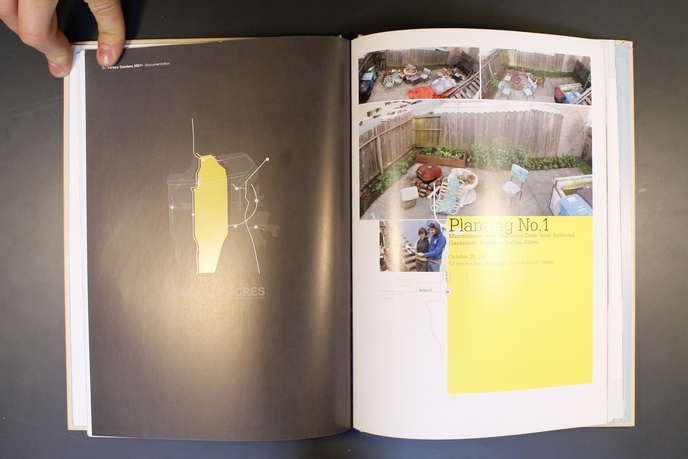 Victory Gardens 2007+ chronicles Amy Franceschini’s inspired reimagining of the original wartime Victory Garden program. The book features essays by Lucy Lippard and Mike Davis along with historical photos and context, project documentation and insight. Victory Gardens 2007+ was presented as a series of actions, sculptural icons, and ephemera during the San Francisco Museum of Modern Art SECA Award show in January of 2007. The project was initially a small pilot program designed to evolve into a larger plan for a city-supported food system. The goal was to create a community of food producers through public outreach and education.

In her introduction in the book Franceschini explains, “I worked idealistically with the hope that a practical program would form; one that could be implemented, practiced, and maintained - and it has. This project is both artwork and democracy in action. It is another reminder that grassroots efforts engage and mobilize communities and tune government to create change. This city IS ours!…I hope the information in this book will pay homage to a past, present, and future of food production within cities.”

This is a broad selection of publications currently in stock at Printed Matter, which relate to activist thought and practice. They are born from a range of disciplinary frameworks and intellectual traditions: direct action, radical pedagogy, critical theory, utopian invention, and ethnographic research. Most are hybrids of these traditions, as each way of working and thinking tends to imply the others. These publications both work to critique our present circumstances, and as images of what our communal life could be. Each attempts to embody a truly democratic community, in its form, in its content, and through the kinds of social life engaged in its production.

Many of these publications work by providing information: as a form of action, as a public service, to transmit the knowledge gained in previous activist work, or as a form of ethnography. Working in New York, The Center for Urban Pedagogy teams up designers and advocacy organizations to produce fold-out posters that educate about the complex bureaucratic and legalistic structures which regulate our lives. Some simply explain how complicated bureaucratic or economic systems work, (eg. social security, the global supply chain of consumer goods) so that people may productively engage in their political life. Others are meant as protection, as tools to help people navigate structurally unjust systems (eg. the deportation process, or unscrupulous investor speculation on affordable housing). In voice and style little separates these posters from government produced public information pamphlets, but unlike government materials, the Center for Urban Pedagogy’s posters specifically point out key problems in the system, providing both strategies to deal with them in the present, as well as possible solutions for the future.

The Occupation Cookbook is a different kind of guide: a detailed description of the mechanisms and forms of direct democracy used by students and faculty during a month long occupation of the Faculty of Humanities and Social Sciences, one of the largest educational institutions in Croatia. The occupation was a response to the introduction of tuition fees in Croatian higher education, part of a wider neo-liberal ‘modernization’ program for the country. In the Occupation Cookbook the functioning of each organ of the occupation is methodically gone over, from the general assembly and working groups, to the organization of security details and the media team. The books’ careful explication of the reasoning behind the specific forms of organization the occupation adopted makes a compelling case for this kind of action, and for the practice of direct democracy as a form of ‘pre-figurative politics’.

Blueprint For A Strike: A Fragmentary Capsule History of the Ironworkers and Other Unions at Nassco, by Fred Lonidier documents several years of relations between a large westcoast shipbuilding yard and the people who work there. The workers belong to a variety of different unions, and the book narrates the ongoing cyclical conflicts between different worker constituencies and the company board as their contract comes up for re-negotiation. Lonidier gives voice to the different players in the yard, weaving documentary photos, news copy, and letter exchanges between the unions and board together with interview excerpts from individual workers. This practice is both sociological and pedagogical. Working with labour organizers and exhibiting his work in union halls, he makes dense representations of the issues at stake available to rank-and-file union members, aiming in this way get people talking, to reinvigorate grassroots engagement within the labour movement.

The Solutions series, edited by Ingo Niermann, and published by Sternberg Press, takes a nearly pataphysical approach to social imagination. Each book consists of a set of proposed ‘solutions’ for the problems of a chosen nation state. Authors posit futures both likely and unlikely for various national cultures, framing their propositions within the concrete unrealities of mainstream national debate or the most obscurely subtle qualities of day-to-day life. Delivered in an ambivalently light tone, The Solutions give permission to the kinds of utopian play which it feels that we have been denied for so long. After all, how can things get better if we can’t annex for ourselves the agency to imagine something else? Maybe we should have all the policemen stand on their heads.