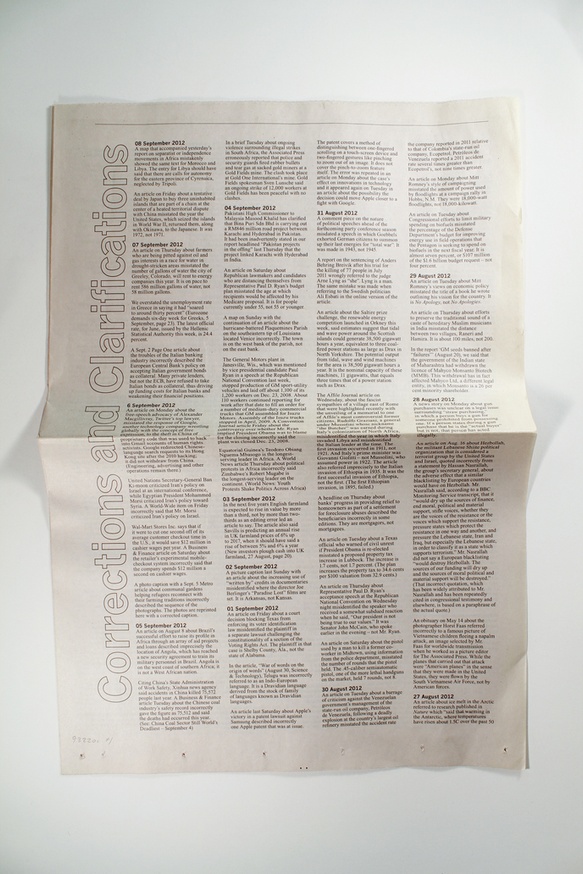 Please log in.
$1.00 ($0.90 for members)
Add to cart
Add to table Facebook Tweet
Corrections and Clarifications, subtitled “Apologies and Justifications, Denials and Distinctions, Retractions and Revisions” is an edited compilation of daily corrections to international news printed in English-language newspapers. This edition focuses on said clarifications from April through September, 2012.

After Reasonable Research presents an exhibition of artists’ books and related material exploring the encyclopedic form. Assembled together, the works form a radical reference library with an interest in accumulated knowledge. The books explore systems of classification, asking how information can be parsed and accommodated into expressive formats that describe content as much as deliver it. Images and text are exhaustively compiled (a number of the works span multiple volumes), often accompanied by charts, lists, annotations and appendices. Some act as compendiums—a working index to a field of knowledge—but all stand as artworks awash with imprecision, personal narrative, rigorous and semi-rigorous research, fiction, and all the compulsions that make these encyclopedias, in a sense, factual. In

Parallel Encyclopedia Batia Suter has created an encompassing work built of images sourced from old encyclopedias, scientific manuals and other texts. The artists’ book—nearly 600 pages—sequences thousands of photos according to a shifting resemblance of form. The extraordinary run-on (trees that look like birds that looks like teapots and so on) reveals a thread of likenesses, as if all forms could be strung together in a single cinematic progression. Josh Smith’s 28-volume

Untitled, which comes in a hand-built wooden box and stands on two stools, resembles a more conventional encyclopedia at first look, though the information it contains is eccentric and not functional in any conventional sense. Hand-sewn binding opens to a mix of photographs, reproductions of charcoal scribblings and compulsive photocopies of the artist’s hand. The work also covers a range of appropriated paper stock—clipped selections from newspapers, Yellow Pages and an office-supply catalog. Smith’s dedication to amassing such an assortment of material suggests that the vast, messy world it describes is one that should be taken seriously. The result is an encyclopedia as filtered through the artist’s hand. Sol LeWitt’s photos in Autobiography format and arranged in a grid—represent an attempt to document every possession in the artist’s New York living and studio space. The inventory includes pots and spoons and spatulas, stacks of books, wooden boxes, various keyholes, photos of photos, as well as his own drawings and sculptures (which undertake a formal inventory of their own). Through his systematic itemization LeWitt grants deeply intimate access to his private life. Similarly, in Daniel Spoerri’s

An Anecdoted Topography of Chance the artist creates a comprehensive catalog of the many objects cluttered on his table (Jar of Celery Salt, Shell Debris, Paring Knife, Very Pretty Dark Blue Bottle, among others). His descriptions touch on size, shape and function but digress into a more expansive reading. Literary quotations, recollected dialogue with friends and the surrounding circumstances are woven into a record of personal remembrance so that the banal detritus reveal their full existence. Translated from the French and further anecdoted by poet Emmett Williams. Publisher and editor James Bridle has created a 12-volume set which stands as the definitive wiki-historiography of The Iraq War is to say almost 7,000 pages that charts the tens of thousands of edits made to the Wikipedia entry on the Iraq War between 2006-2009. The work is a remarkable instantiation of what is otherwise intangible—a behind the scenes look at how history gets hammered out, and what facts are allowed to stand as facts. Miranda Maher’s