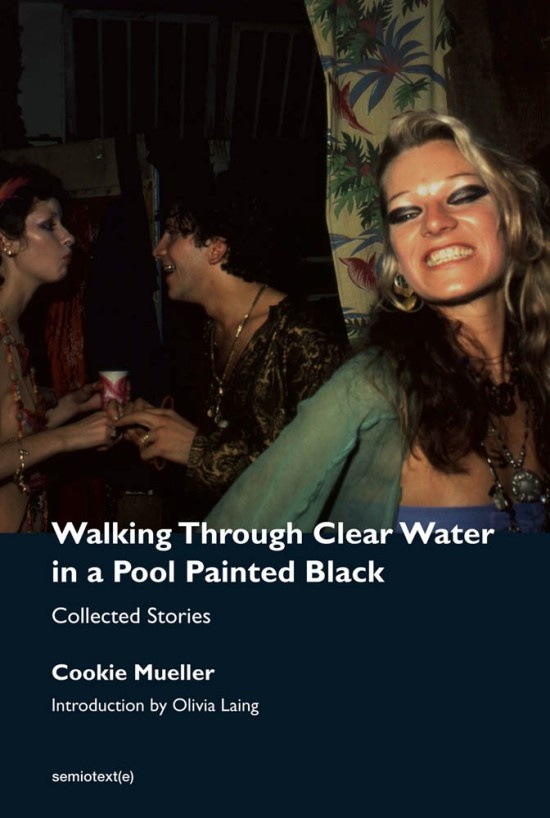 The first collected edition of legendary writer, actress, and adventurer Cookie Mueller’s stories, featuring the entire contents of her 1990 book Walking through Clear Water in a Pool Painted Black, alongside more than two dozen others, some previously unpublished.

Legendary as an underground actress, female adventurer, and East Village raconteur, Cookie Mueller’s first calling was to the written word: “I started writing when I was six and have never stopped completely,” she once confessed. Mueller’s 1990 Walking through Clear Water in a Pool Painted Black, the first volume of the Semiotext(e) Native Agents series, was the largest collection of stories she compiled during her life. But it presented only a slice of Mueller’s prolific work as a writer. This new, landmark volume collects all of Mueller’s stories: from the original contents of Clear Water, to additional stories discovered by Amy Scholder for the posthumous anthology Ask Dr. Mueller, to selections from Mueller’s art and advice columns for Details and the East Village Eye, to still “new” stories collected and published here for the first time. Olivia Laing’s new introduction situates Mueller’s writing within the context of her life—and our times.

Thanks to recent documentaries like Mallory Curley’s A Cookie Mueller Encyclopedia and Chloé Griffin’s oral biography Edgewise, Mueller’s life and work have been discovered by a new generation of readers. Walking through Clear Water in a Pool Painted Black: Collected Stories returns essential source material to these readers, the archive of Mueller’s writing itself. Mueller’s many mise en scènes—the Baltimore of John Waters, post-Stonewall Provincetown, avant-garde Italy, 1980s New York, an America enduring Reagan and AIDS—patches together a singular personal history and a primer for others. As Laing writes in her introduction, Collected Stories amounts to “a how-to manual for a life ricocheting joyously off the rails… a live corrective to conformity, conservatism, and cruelty.” - MIT Press