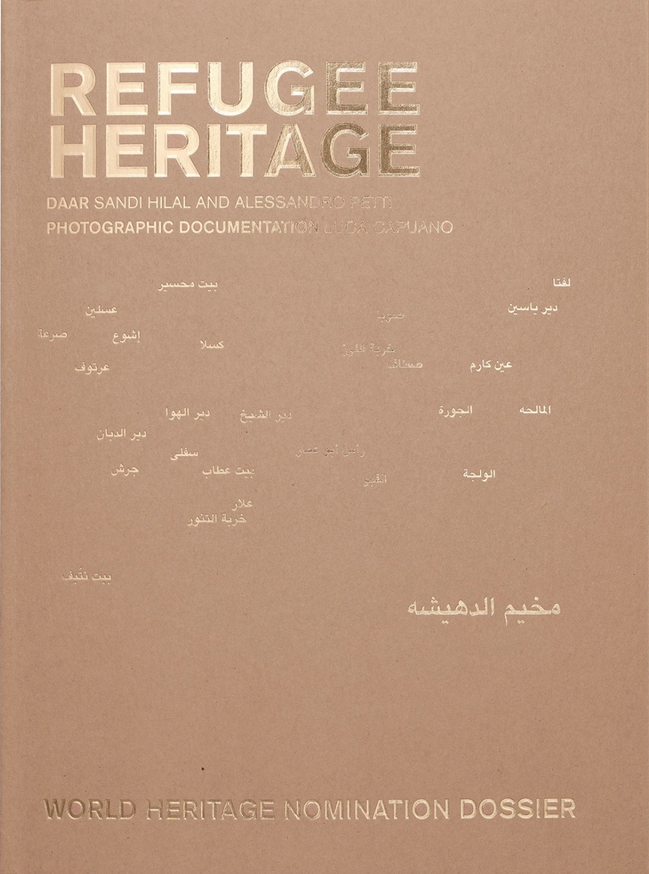 Refugee camps are established with the intention of being demolished. As a paradigmatic representation of political failure, they are meant to have no history and no future; they are meant to be forgotten. The history of refugee camps is constantly being erased and dismissed by states, humanitarian organizations, international agencies and even by refugee communities themselves, who fear that any acknowledgment of the present condition in the camp may undermine their right of return to their place of origin. The only history that is recognized is one of violence and humiliation. Yet the camp is also a place rich with stories, narrated through its urban fabric.

In tracing, documenting, revealing and representing refugee history beyond the narrative of suffering and displacement, Refugee Heritage is an attempt to imagine and practice ‘refugeeness’ beyond humanitarianism. Such a process requires not only rethinking the refugee camp as a political space: it calls for redefining the refugee as a subject in exile and understanding exile as a contemporary political practice that is capable of challenging the status quo. The recognition of “the heritage of a culture of exile” constitutes a new perspective from which social, spatial and political structures can be imagined and experienced, beyond the idea of the nation-state.

This book-dossier attempts to deactivate the claims of objectivity and universalism contained in the conventions followed by UNESCO in determining World Heritage status; it presents different narratives that do not fit within such statist discourse, reorienting heritage towards non-hegemonic forms of life and collective memory. By reusing, misusing and redirecting UNESCO World Heritage guidelines and criteria, Refugee Heritage challenges definitions of heritage and their colonial foundations, asking instead how architecture is mobilized as an agent of political transformation.

Refugee Heritage is comprised of the first four parts of the Annex 5 UNESCO nomination dossier for the inscription of Dheisheh Refugee Camp as a World Heritage Site, and an Appendix containing architectural interventions, conversations and responses, produced over the course of the last six years with the participation of organizations and individuals, politicians and conservation experts, activists, and governmental and non-governmental representatives. The publication of this book has been made possible with the generous support of the Royal Institute of Art, Stockholm; Iaspis, the Swedish Arts Grants Committee’s International Programme for Visual Artists; Van Abbemuseum; Art Jameel in Dubai. The book was presented on the occasion of the 17th International Architecture Exhibition, La Biennale di Venezia, 2021.

“Why resurrect it all now. From the Past. History, the old wound. The past emotions all over again. To confess to relive the same folly. To name it now so as not to repeat history in oblivion. To extract each fragment by each fragment from the word from the image another word another image the reply that will not repeat history in oblivion.” A curated selection of publications made in conjunction with our window installation on Korean American artist Theresa Hak Kyung Cha (1951—1982).