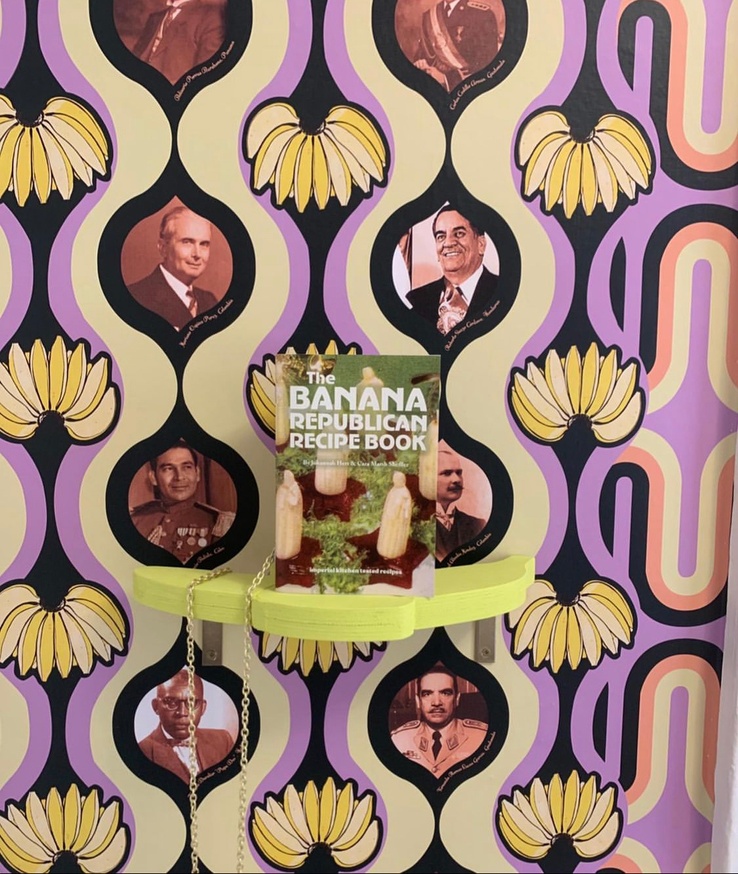 Equal parts propaganda and home economics, The Banana Republican Recipe Book is a dark riff on the United Fruit company’s recipe booklets of the mid-20th century. Now known as Chiquita Brands, United Fruits was anything but a cheery purveyor of tropical produce. Rather, the corporation worked hand-in-glove with the US Government and the CIA to facilitate regime change, crush labor organization, defeat environmental advocacy, grab indigenous land, and, above all, ensure that the banana stayed unreasonably cheap—and astronomically profitable—in supermarkets across the world. The Banana Republican Recipe Book is a fresh take on the rotten underbelly of America’s favorite fruit.

“Banana Republican Recipes” is a corollary to our 2020 catalogue, “Domestic Terrorism: War Rugs From America.” “Domestic Terrorism” documented and expanded upon Johannah’s ongoing “War Rugs From America” series—rugs which use the material and visual narrative strategies of Afghan War Rugs to interrogate state-sanctioned violence in America. In that catalogue, we aimed to portray American decline as what it invariably is: a consumer experience.

“War Rug X (Banana Republics/US Intervention in Latin America),” is another machine-tufted rug in this series. It is featured in the New Art Dealers Alliance on Governors Island this spring and summer (2021) with the support of Geary Gallery. Johannah’s installation, “Above the Fruited Plain (America! America!)” applies her war rug rhetoric to the violent legacy of American intervention—corporate and military—in Central America and the Caribbean. The rug is paired with a work on paper, “The Chemical Composition Of a Coup”; a subversive tropical wallpaper; and “Banana Republican Recipes.”

We lighted upon the medium of a recipe book to convey our curatorial content because United Fruit released them regularly from the 1940s to the 1970s. Light romps packed with nutritional information and cultural appropriation, they were part of a larger corporate propaganda campaign that enlisted doctors to tell patients to feed their children bananas and found its way into home economic classrooms across the country for decades. As Americans, we literally consumed that propaganda and, in the process, bought into a larger narrative about America as a good actor and benevolent, all-knowing protector during the Cold War.

This narrative is as toxic as the numerous pesticides used to protect the Cavendish banana monoculture. The notion of monoculture itself is shortsighted, weak, and doomed to fail, taking down so many lives, ecosystems, and communities with it. While the book is meant to be enjoyable and provide a little levity in the absurdities of late-stage empire, it begs to ask what a banana could cost—versus what it should. We want to encourage the reader to question when something seems a little too cheap to be true, take a closer look, and a longer view.