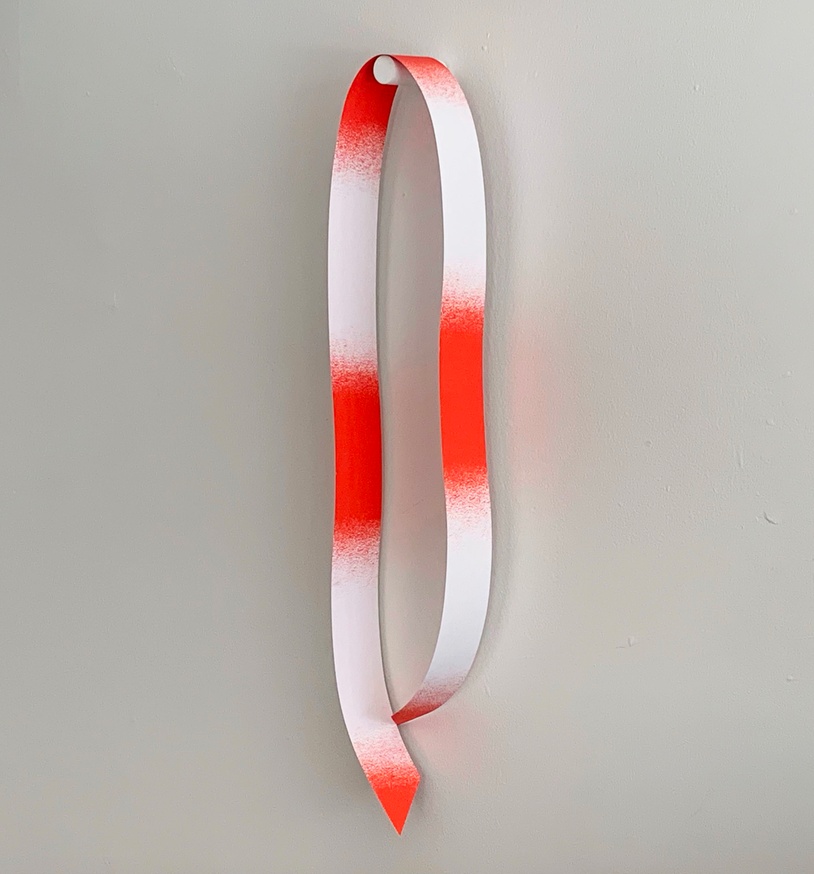 Artist Gordon Hall has produced a new limited edition sculptural artwork on the occasion of Printed Matter’s participation in Upstate Art Weekend 2021. Sash is a sixty inch long and two inch wide double-sided screen print draped over a wall-mounted peg. Much of Hall’s work is invested in everyday objects that contain, carry, and hold, which often emerges as sculptures that carry multiple readings. Sash is a portrait of a hanging bathrobe sash, abstracted into a hand-drawn gradient that is both drawing and sculpture. This edition is inspired by work from Hall’s recent exhibition END OF DAY at Hesse Flatow, New York. The purchase of this editioned work includes installation instructions.

Gordon Hall is an artist based in New York who makes sculptures and performances. Hall has had solo presentations at the MIT List Visual Arts Center, The Portland Institute for Contemporary Art, The Renaissance Society, EMPAC, and Temple Contemporary, and has been in group exhibitions at The Whitney Museum of American Art, The Brooklyn Museum, The Hessel Museum, Art in General, White Columns, Socrates Sculpture Park, among many other venues. Hall’s writing and interviews have been published widely including in Art Journal, Artforum, Art in America, and Bomb, as well as in Walker Art Center’s Artist Op-Ed Series, What About Power? Inquiries Into Contemporary Sculpture (published by SculptureCenter), Documents of Contemporary Art: Queer (published by Whitechapel and MIT Press,) and Theorizing Visual Studies (Routledge). OVER-BELIEFS, a volume of Hall’s collected essays, interviews, and performance scripts was published by Portland Institute for Contemporary Art in 2019. Gordon Hall is represented by DOCUMENT, Chicago.