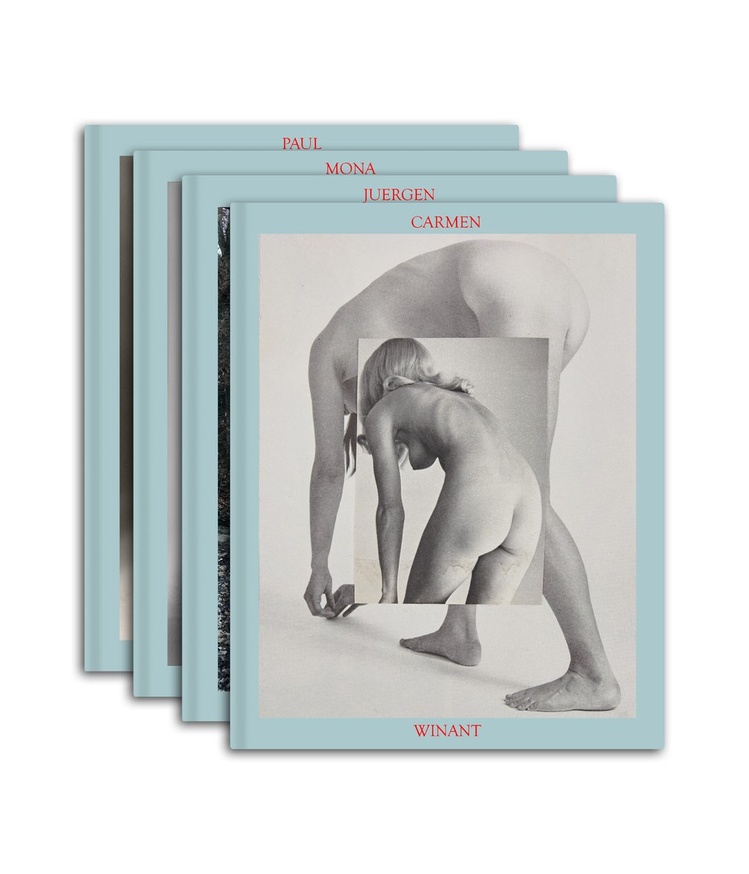 TBW Books is excited to present the seventh installment of our Annual Series. This year, four artists were invited to approach the concept of the human form. Implementing stylistically distinct approaches, each book works to challenge the artist’s own practice, making room for discovery within not only their own oeuvre but within the language of photography itself.

While each book is thought of as a stand-alone title, an undeniable dialogue is shared between all four when presented together, allowing viewers to experience the collection as a singular photographic meditation.

Body Index began a decade ago when Winant worked as a model for figure drawing classes and, as she explains, watched herself being watched from every angle. Affected by this moment in which the surveilled female body is transmuted into Art, Winant began to collect and collage images of women posing– originally intended as anatomical reference photographs for artists –to explore how the female body is instrumentalized before the camera’s gaze. In recontextualizing these images, Winant locates and exposes a hidden rebellion within the posing bodies. Though originally rendered as blank learning instruments, Winant’s subjects reveal a self-possession, an upper hand, something errant. A range of other bodies appear atop these images– from lesbian separatists to massage therapists and beyond –melding into a single picture-plane that complicates the terms of gendered agency and stillness. Originally assembled as a modular piece separated into discrete panels containing hundreds of image cells, the images are here presented in a tightly curated selection, each figure holding a single page.

In The Nipple the viewer is immediately confronted by the book’s cover of Teller’s mask-wearing nude subject. The image, notably shot pre-pandemic, acts as an allusion to the ever precarious nature of our mortal bodies. In his iconically casual style, Teller continues to allude to the body by pointing us to unused and uncared for exercise equipment on empty European city streets. Eventually this repetition is punctuated by a personal element, the artist himself undergoing an endoscopic medical procedure, perhaps routine but possibly more serious. When not isolating the human body itself, he gives us devastated proxies for it: an unworn dinosaur costume inert and wrinkled on the floor, a desiccated frog that’s fallen victim to roadkill, a lifeless fish on dirty ground many days since its last gasp. By contrasting images of weakness and desolation with those of bodily vitality, Teller foreshadows brilliantly the isolation and tension that, at the time of printing, were still yet to come.

For Study, Mona Kuhn returns to the darkroom for the very reason she fell in love with photography: the latent image. Inspired by the surrealist photographers of the 1920’s, she explores the ethereal quality of solarization. A visually distinct process­ through which the photographed subject seems underlined by the alchemist’s pencil, solarization is thought to be discovered by Lee Miller while printing for Man Ray, who ultimately took credit for the discovery. The method is as complex and uncertain as the human form itself; consequently the recipes from the past no longer work on present-day materials. Like the figure in her images, Kuhn sought to find her own balance, the results culminating in a series of unique prints that reveal layers of silver glow in the form of oxidized magic.

Kuhn’s experiments in crystallizing the latent image mirror the Kafkaesque existence of her subject. From a vulnerable and inquisitive sense of self to the confident posture of a man addressing the invisible masses, the perfectly contained to dematerialized silhouettes, the photographs emphasize an absurd nuance, teetering on the edge of reality and surreality.

Business of Fashion was created in 2018 when photographer Paul Kooiker was invited by Michéle Lamy to do an art performance during Voices, an annual invitation-only event organized by the Business of Fashion (BOF) that gathers some of the most influential tastemakers of the global fashion industry, uniting them with innovators and entrepreneurs who together hold great influence on popular culture.

Kooiker’s response to Lamy’s request was to photograph the guests one by one, equalizing them by capturing each from the neck down in a uniform “limbs-splayed” pose. Shot against a blank grayscale backdrop, the subjects, often accustomed to public recognition, become semi-anonymous, headless mannequins reminiscent of the window displays, mail order catalogues, and online marketplaces that drive the industry forward. Balancing a voyeuristic intrigue with tongue-in-cheek humor, the photographs reveal to the viewer the often banal clothing of those who are anything but.