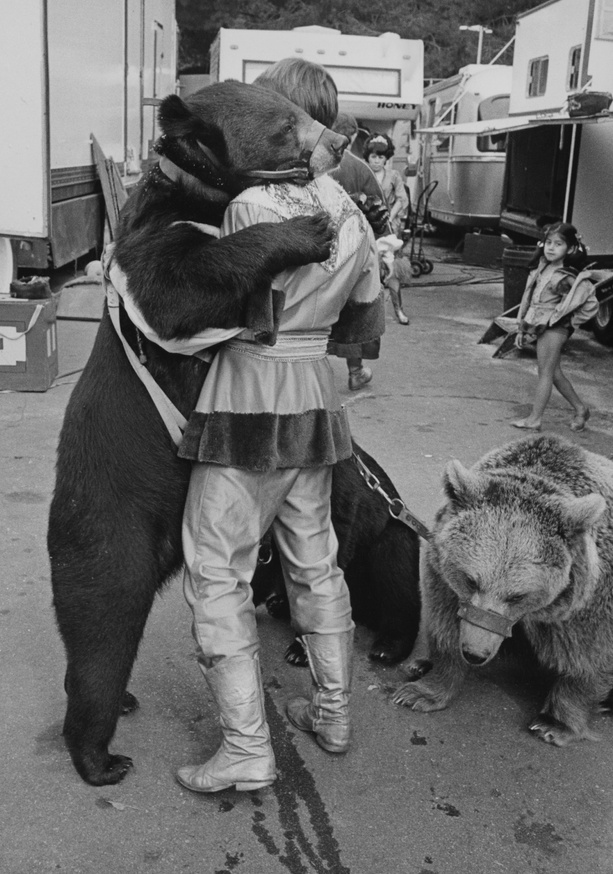 Taken at the Vargas Circus in California in 1990, Huggy Bear captures an intimate moment between a performer and his bears, mid embrace. Fully costumed, but not on stage, Freedman’s image presents itself as magical realist by capturing the fantastic and extraordinary relationship cultivated between man and animal, amidst a setting of parked caravans and off duty performers. Huggy Bear is a Giclée print on Hahnemuhle Photo Rag Baryta.

Photographer Jill Freedman (b. 1939 in Pittsburgh) creates images which explore the social science and humanism that exist on the street, documenting a range of subjects from small moments of sexual intimacy to civil rights protests. Though best known for her work centered on New York City, Freedman has travelled extensively, executing projects on rural Ireland and the Poor People’s Campaign that established Resurrection City in Washington, D.C in 1968.

Jill Freedman’s work is held in the public collections of MoMA, the International Center of Photography, New York, National Museum of American, Smithsonian Institution, the New York Public Library, Museum of Fine Arts, Houston, and the Bibliothèque Nationale, Paris, among others. She is the author of seven books of photography, including Old News: Resurrection City (1970), Street Cops (1981), and Ireland Ever (2004).

We’ve launched a new fundraising edition “Huggy Bear” by photographer Jill Freedman alongside a second printing of her book Only Human. A selection of out of print publications including Street Cops, Circus Days, Ireland Ever, A Time That Was: Irish, Jill’s Dogs and Old News: Resurrection City are also available.