David Wojnarowicz: A Definitive History of Five or Six Years on the Lower East Side 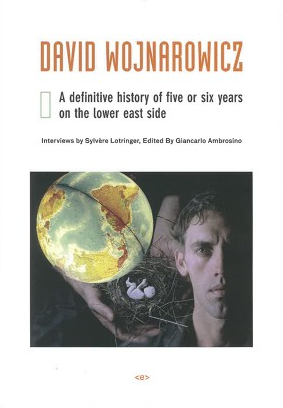 Please log in.
$29.95 ($26.95 for members)
Add to cart
Add to table Facebook Tweet
In February 1991, the artist David Wojnarowicz (1954-1992) and the philosopher Sylvère Lotringer met in a borrowed East Village apartment to conduct a long-awaited dialogue on Wojnarowicz’s work. Wojnarowicz was then at the peak of his notoriety as the fiercest antagonist of morals crusader Senator Jesse Helms–a notoriety that Wojnarowicz alternately embraced and rejected. Already suffering the last stages of AIDS, David saw his dialogue with Lotringer as a chance to set the record straight on his aspirations, his personal history, and his political views. The two arranged to have this three-hour dialogue video-recorded by a mutual friend, the artist Marion Scemama. Lotringer held on to the tape for a long time. After Wojnarowicz’s death the following year, he found the transcript enormously moving, yet somehow incomplete. David was trying, often with heartbreaking eloquence, to define not just his career but its position in time. The subject was huge, and transcended the actual dialogue. Lotringer then spent the next several years gathering additional commentary on Wojnarowicz’s life and work from those who knew him best–the friends with whom he collaborated. Lotringer solicited personal testimony from Wojnarowicz’s friends and other artists, including Mike Bildo, Steve Brown, Julia Scher, Richard Kern, Carlo McCormick, Ben Neill, Kiki Smith, Nan Goldin, Marguerite van Cook, and others. What emerges from these masterfully-conducted interviews is a surprising insight into something art history knows, but systematically hides: the collaborative nature of the work of any “great artist.” All these respondents had, at one time, made performances, movies, sculptures, photographs, and other collaborative works with Wojnarowicz. In this sense, Wojnarowicz appears not only as a great originator, but as a great synthesizer. - The MIT Press