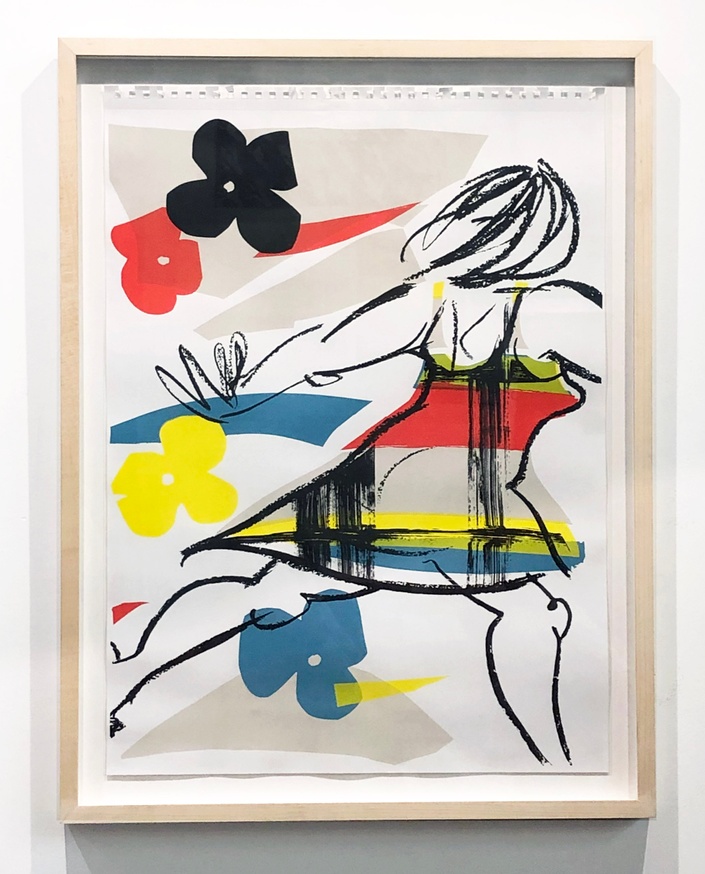 Pursued is a 5 color screen print by Ella Kruglyanskaya, produced on occasion of the 2019 LA Art Book Fair. The central figure is drawn in sweeping and exact gestures, a woman being pursued, or in pursuit of something outside the frame. Kruglyanskaya’s work is often fraught with drama and humor. Here is the female protagonist set against a backdrop of pop-culture and glamour, exhausted and at the same time empowered by her environment.

Ella Kruglyanskaya (b. 1978 in Riga, Latvia) received her BFA in painting from the Cooper Union in 2001 and her MFA in painting from Yale School of Art in 2006. Kruglyanskaya’s paintings depict women in humorously absurd environments or garments that engage with historical tropes of Western painting, especially in regards to the female figure as subject. The exuberant nature of Kruglyanskaya’s paintings and figures create pictorial events that are not narrative, but visual, in what Kruglyanskaya describes as “anti-style.” Kruglyanskaya cites references such as Philip Guston and fashion and film posters from the 1950s. Ella Kruglyanskaya has had solo exhibitions at Gavin Brown’s enterprise in New York, Thomas Dane Gallery in London, the Power Station in Texas, and Kendall Koppe Gallery in Glasgow, UK. She has also had group exhibitions at Elmhurst Art Museum, Contemporary Art Centre in Lithuania, the Hepworth Wakefield in the UK, Pace Gallery in London, and the Office Baroque in Belgium. Her work is held in the collections of the Broad Museum in Los Angeles and Tate Modern in London.