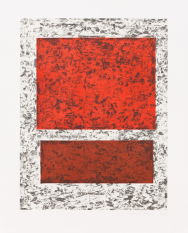 A suite of six aquatint etchings, Conclusion (2016), appropriates pages from two declassified FBI reports: “Threat Assessment of Pro-Khomeini Shiite Activities in the United States,” dated February 24, 1984, which details terrorist threats from Iran and Iranian-linked institutions in the United States, and “The Terrorist Threat to the US Homeland: An FBI Assessment,” dated April 15, 2004, which provides an overview of foreign and domestic terrorist threats ranging from Sunni extrem- ist groups to animal rights groups. The works investigate the look of censorship, and engage with the material and idea of erasure.