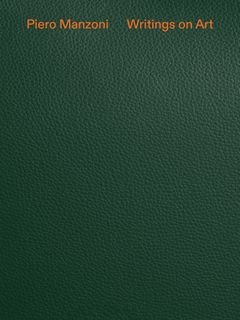 Featuring a luxurious faux-leather binding, Piero Manzoni: Writings on Art features 25 texts by the Italian artist Piero Manzoni (1933–63), spanning from 1956 to 1963, the year of the artist’s premature death by heart attack.

Writing during the Italian economic miracle of the ’50s and ’60s, Manzoni’s essays and manifestos represent his response to the state of midcentury Italian art and art writing. Selected by art historian Gaspare Luigi Marcone, all writings have been either translated into English for the first time or newly translated. Each text is accompanied by extensive archival images and contextualized with editorial commentary.

The book features a foreword by the Piero Manzoni Foundation’s director, Rosalia Pasqualino di Marineo, and a newly commissioned essay by one of today’s best-known art historians, Benjamin H.D. Buchloh.