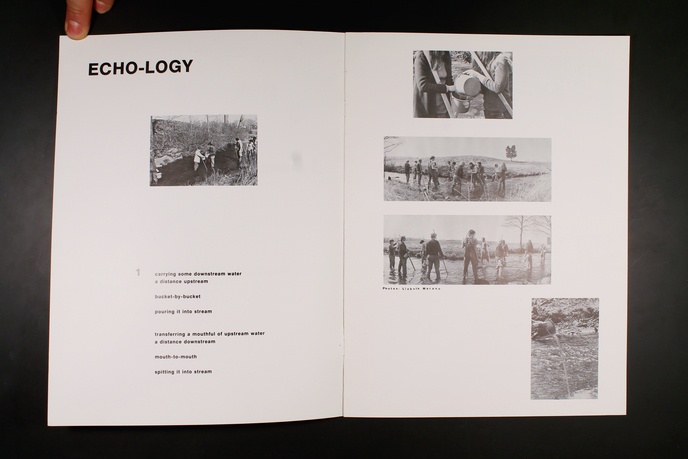 Please log in.
$40.00 ($36.00 for members)
Add to cart
Add to table Facebook Tweet
This book photo-documents this Alan Kaprow performance piece carried out by Kaprow and others at a stream in Far Hill, New Jersey and is concerned with natural processes, the movement of wind, water, and sound, and human interaction with them. Formatted in panels with a brief text description of each action, the document reads like a Fotonovella.

The comic book is generally thought of as in the domain of popular culture, or as part of the children’s books genre. In the past 30 or 40 years, evolving largely from the underground adult comics of the 1960’s and 70’s, there has been a growing group of comic book artists experimenting with the forms and conventions of comics, pushing them in new directions and demanding consideration as a serious art form. Conversely, the comic book, or various aspects of comic book art, have been employed or referenced by a number of contemporary visual artists. Indeed, many of the basic elements of what constitutes a comic— pictorial sequence, narrative, movement, time, etc— are such common considerations of contemporary art that the comic is often evoked unconsciously or unintentionally. And this is particularly true of artists’ books. This listing was compiled for the exhibition “Conceptual Comics”, at the Walter Phillips Gallery in Banff, Canada, curated by AA Bronson and Max Schumann. It represents a snapshot from Printed Matter’s current inventory of the pervasive, yet often subtle, presence comic books have both in the field of artists’ books as well as in our collective cultural consciousness. Below are a few examples of comic arts varied influence in contemporary artistic practice. In the opening pages of Sol LeWitt’s

Four Basic Kinds of Line & Color the contents of the book (lines which are vertical, horizontal, and diagonal in opposing directions, and in four different colors, in all their possible combinations) are presented as a series of panels. While acting as a visual table of contents, the two page spread also functions as an abstract comic strip dealing with basic graphic combinations and their sequence. Ivory Coast artist Frédéric Bruly Bouabré evokes the earliest forms of picture narratives in his pictogram writing. In the 1950s Bouabré created a writing system using mono-syllabic pictograms for his native language of Bouabré which was never taught in the schools (the entire education system in the Ivory Coast is taught in French). While Bouabré’s alphabet had the practical application of a method of communication (it continues to be used today), it also served as a tool for Bouabré’s own exploration of all the fields of knowledge (Philosophy, History, Science, Religion, etc). In this epic and ongoing project, Bouabré’s alphabet questions and plays with those same systems of organization, and his symbols attest to the fluidity [flexibility] of how meaning is produced and determined. In

A Lover’s Tale, Sarah Charlesworth draws from the iconography of popular culture specifically sci-fi, fantasy and horror B-movies from the 1950’s and 60’s. The images are arranged according to the physical poses and gestures of the characters, which underscore stereotypical gender roles (woman as maiden, victim, or seductress; man as hero or villain). While the melodrama of each film-still suggests a frozen moment, Charlesworth constructs a sequence of images from disparate sources, which while not strictly narrative, can still be read as a kind of story. And finally there is an exchange of gazes that also tells a story, one in which the reader is an active participant, caught up in this theatrical casting of sexual roles and identity. The transatlantic artist team of Grennan & Sperandio use the comic book form as a vehicle to explore the possibilities of creating a participatory and populist artistic practice. Using the anecdote as their raw material, Grennan and Sperandio transform their gathered stories into digitized comic books. Their process of production is also a collaborative one: working with specific themes, and/or communities (often communities related to the project’s sponsor) they take the everyday stories of their subjects and photograph them acting out or posing for those stories. Using a custom-made computer program, the photos are then digitally converted into comic-like graphics. The comics are then sold or given away for free in the same communities where the narratives originated, concluding the involvement of the public in both the execution and reception of the project. Much of modern and contemporary art has been involved in devising new and experimental ways of viewing the world or expressing the human experience, and the tendency often is to render the familiar as different. This, along with the hierarchical and classist structure of institutional culture, has sustained the divide between “high” and “low” forms of art. At the same time avante-garde and experimental artistic practices have also been engaged in the perennial question of what is the relationship of art to life, and by extension what is art’s social function. As a truly popular art form, it seems predictable then that contemporary art would employ or reference the comic, both as a universal form of communication, as well as for its elemental and complex components and structure.